They were competitive for the most part, when taking into account all the noise about Sam Mitchell taking over as coach from Alastair Clarkson in season 2022. Despite Clarkson coaching four premierships, Hawthorn haven’t been in the finals since 2018, which isn’t acceptable for a coach of his calibre.

The fact is that Hawthorn had the microscope on them throughout season 2021, but they still managed to draw against the Melbourne Demons and the Richmond Tigers, in Round 18 and Round 23. It must have been tough for everyone involved in the club as the majority of people were critical of the decision made to change coaches.

Irrespective of who’s right or wrong, a coach’s tenure has to end some time, so maybe Hawthorn could benefit from a new voice at the helm, with Sam Mitchell to take the reins in season 2022.

There’s no doubt that Hawthorn will benefit from the return of James Sicily from injury, who’s a quality key defender.

Hawthorn go into season 2022 with the third-youngest list in the AFL with an average age of 23.8, so it looks like they will probably be rebuilding, but Sam Mitchell was a competitor as a player so you never know. The fact that Hawthorn only lost one of their last six games, against the Adelaide Crows in Round 19, shows there is light at the end of the tunnel for the Hawks.

Hardwick is a midsized defender who’s capable of playing a pivotal role in a team that could surprise any opposition that takes them lightly in season 2022. He averaged a respectable 5.15 intercepts per game in season 2021.

He featured in 20 of 22 games, only missing Round 17 and Round 18 through injury. Having an average of 83.69 per cent disposal efficiency was the second-highest for Hawthorn in season 2021, which he should look to replicate in season 2022.

James Worpel needs to improve as he is capable of finishing much higher in the Hawthorn best and fairest than his equal ninth finish in season 2021. He only missed two games in season 2021, but would be disappointed that he had less than 20 disposals on eight occasions.

Worpel had an average of 8.45 contested possessions per game, which was the fourth-highest of any Hawthorn player in season 2021. The fact is that he needs to improve and win more of the ball in season 2022 as Mitchell and Jaeger O’Meara can’t do everything as far as Hawthorn’s inside midfielders are concerned.

There’s no doubt that Worpel has potential that he needs to fulfil if Hawthorn are to play in finals in season 2022. 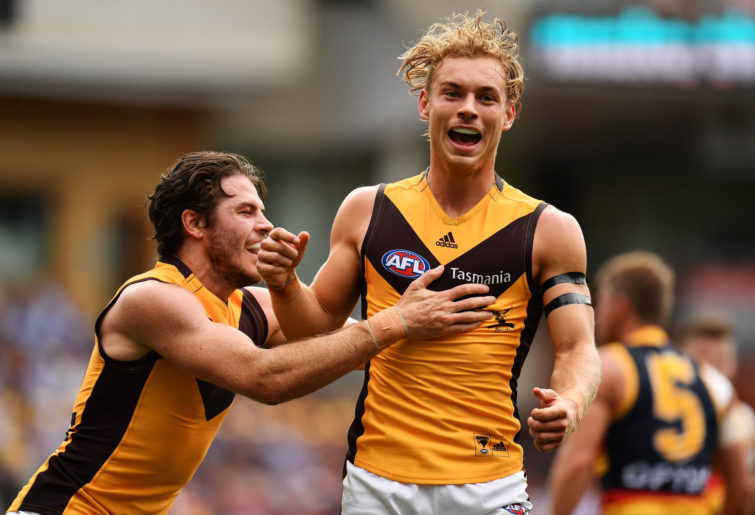 Mitchell Lewis was a pivotal part of Hawthorn’s team in the 14 games that he played in season 2021; he averaged the most contested marks of any of Hawthorn’s players with an average of 1.79 contested marks per game. Hawthorn didn’t lose a game with Lewis in the team in the last four games of last season, which included wins over the Brisbane Lions, Collingwood, the Western Bulldogs, and a draw against Richmond.

Lewis averaged 4.71 score involvements per game in season 2021, playing as a key forward, which is something he can improve on in season 2022. He averaged the second-most goals of any Hawthorn player with an average of 1.57 goals per game.

Despite that, he kicked at least one goal per game in 14 games in season 2021, which is remarkable. He will need to kick more goals in season 2022, which he should do, provided he stays injury free.

Tom Mitchell has plenty of pressure on him to perform well and keep on winning a lot of the ball. He may have won the Hawthorn best and fairest fairly comfortably, but he needs to improve his disposal efficiency with an average of 74.56 per cent season 2021.

His durability is also a strength of his as he featured in all 22 games that Hawthorn played. He was the only player from Hawthorn to be selected in the All Australian squad, but he would be disappointed that he wasn’t selected in the final 22, which is what he will need to do in season 2022 if Hawthorn are to be a chance of playing finals.