The Roar
19th January, 2022
11
Join the conversation
5527 Reads
Advertisement
Write for The Roar

Nick Krygios described the crowd as a “zoo” and British qualifier Liam Broady admitted he struggled to cope with the level of verbal abuse hurled at him during a wild first-round Australian Open match.

A few days after the Ashes wrapped up it was Australia vs. England again in Melbourne and the home crowd savaged the 28-year-old qualifier from Stockport in often unsavoury scenes.

Broady was jeered as he walked out to play on Kyrgios’ favourite court at John Cain Arena, where the Canberran showman has developed a cult following in recent years, and where he prefers to play rather than the more staid Rod Laver Arena.

Fans were vocal throughout the night and while Broady saw the lighter side of some of their antics – as well as those of Kyrgios who unveiled a full range of tricks – he revealed post-match he found the overall experience “absolutely awful”.

Kyrgios follows up a 220km/h ACE with a cheeky underhand serve! It's only the second game!!#AusOpen – Live on Channel 9 and 9Now pic.twitter.com/EXX2JGoi5N

“I mean, everyone is telling me (before the match), like, Oh you’ll really enjoy it. It’s going to be amazing. But I thought it was absolutely awful. I obviously wanted to go out there and win, so, I mean, losing matches in general isn’t enjoyable,” Broady said.

“The atmosphere was incredible, but it was, it’s the first time I’ve ever walked onto a tennis court and been booed, which for me was a crazy experience.

“You get sledged from the sides like you can’t believe that they don’t pick up on TV. So it was a very, very difficult atmosphere to try and handle, and like I said, he’s incredible at getting them behind him and he plays better for it.

Broady. "Incredible experience. First time in my life that I got booed. It was crazy". pic.twitter.com/ldSHKRTzpx

“I think that’s very rare, especially in the sport of tennis. Now people don’t really interact with the crowd like he does and that’s one of his biggest strengths.

“I’m glad to have played the match and to have got the experience, and for a Brit to go and play on John Cain against Kyrgios is probably one of the tougher atmospheres in tennis to play. So it stands me in good stead for the rest of the year anyway.”

Asked if he could repeat the sledges he received, Broady said: “Not much of it, no. I was pretty surprised at it, to be honest.

“But at the end of the day, as tennis players we’re entertainers, and as long as the crowd are enjoying it I think we’re doing our job. So I try not to let it, obviously it’s got to be water off a duck’s back. You’re focused on trying to win the match. But it was definitely a different experience.

He said he played in a Battle of the Brits team event that compared to the level of abuse he recived on John Cain.

“At that event at first I would spend time interacting with the guys sledging me and you would end up losing focus on the match,” he said.

Broady said fellow players had warned him to prepare for Kyrgios to treat him with “disrespect” on court in their first encounter on tour.

But the 28-year-old didn’t feel the Australian had crossed a line with his array of unconventional trick shots and on-court gestures that were aimed at whipping the crowd into a frenzy.

“Sometimes he makes you feel stupid with the shots he hits, with the underarm serves through the legs and the little lobs and the dinks and then the big hits,” Broady said.

“Sometimes you feel like a bit of a club player out there. That’s what he does.

“That’s one of his biggest weapons.

“I think if you told Nick to stop all of that showmanship and all the stuff that he does it would take away a big strength of his game.

Kyrgios, who took a sip from one fan’s beer as he signed autographs post-match, was also frustrated by some of the crowd’s behaviour.

Fans repeatedly called out “siuuu” – a catchcry made famous by football superstar Cristiano Ronaldo – throughout the match.

“I can’t believe they did it so much,” Kyrgios said.

“They were doing some Ronaldo thing … Ronaldo does it every time he scores.

“I thought they were going to do it for like 10 minutes (but) they did it for two-and-a-half hours, like every point. It was a zoo out there.”

Kyrgios will play No.2 seed Daniil Medvedev in the second round.

'Run properly please': Nick Kyrgios with his most bizarre complaint yet

Surely you can't blame the ballkid for an innocent mistake like that, particularly as the serve went in! Kyrgios took the first set against… 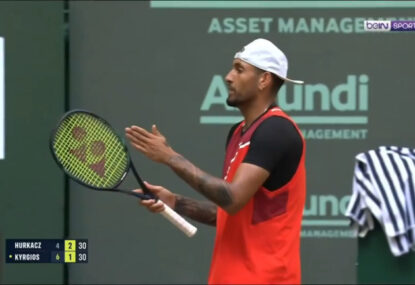 'Run properly please': Nick Kyrgios with his most bizarre complaint yet

Kyrgios crushed world No.19 Pablo Carreno Busta 6-4, 6-2 to move into the semi-finals in Halle. 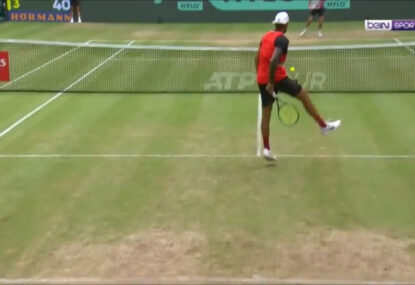 'Bit of a circus': Racquet smash, ump explosion and stunning shots in the most Kyrgios win ever

Nick Kyrgios brought out all the hits in a surprise win over Stefanos Tsitsipas in Halle. 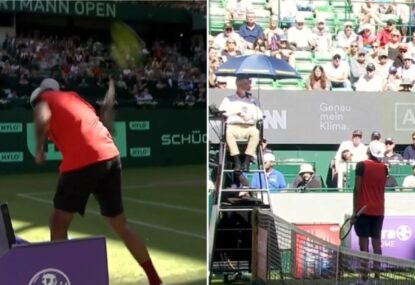 'Bit of a circus': Racquet smash, ump explosion and stunning shots in the most Kyrgios win ever