The AO, tennis fans and Nick Kyrgios should all be embarrassed

Australia’s Nick Kyrgios has developed something of a reputation as an entertainer over recent years and regardless of your definition of exactly what that is, it is hard to argue against.

The fans seem to flock to the courts to see what drama he can muster, social media lights up whenever the 26-year-old is in action and the media queue up waiting for a story that will usually be based around something far more juicy than the tennis just played.

Despite all the positives that go along with the above, as broadcasters salivate over Kyrgios’ performances and the lead-up to them, and fans head home well and truly filled with a sense of having received ‘bang for buck’, there is also a sense of uneasiness around the atmosphere created during them.

Tennis has been far from genteel at the Australian Open for many years. We can thank the Swedish supporters of the mid-1980s for that, as they cheered along former superstars of the tour Mats Wilander, Stefan Edberg and Anders Jarryd. Davis Cup contests in Europe at around the same time had begun to feature parochial displays of the type previously unseen in tennis.

There was nothing alarming about the more active participation of fans at the time, however, after a few Davis Cup flashpoints soon after, where particular rules were put in place to ensure that home fans were kept in check, we had been potentially warned of just where things could head in the future.

Soon after sighting the Swedes in action Australian crowds at the open jumped on board, as the Fanatics became an annual feature of the event. No matter which court or at what time, the active supporter group for Australian tennis professionals was there, with nautical hats mind you, squawking patriotically for the local players.

Rather disturbingly, it became increasingly obvious that they appeared to remain extremely quiet after points won by Australian opponents, almost more noticeably when the point had been won with a flourish and a shot of outstanding quality.

As a child brought up in a tennis family, such a form of support does not sit comfortably with me.

Players themselves will often verbally or physically give kudos to an excellent shot during play, far more often than many people realise, yet I was always curious as to why some paying fans could not do the same, despite their patriotic feelings towards one of the combatants.

Over the years, the loud and often raucous support for Australian players at Melbourne Park has escalated, so much so, that many in attendance seem to be present more for the party atmosphere than the actual tennis being played.

I guess the Australian Open ticket in their hand was purchased with their own money and thus may support how they see fit.

However, the rise of Kyrgios and the odd, petulant, irrational and brilliant behaviours he brings to just about every match he plays have now morphed with a vast number of party-seeking overly patriotic fans. 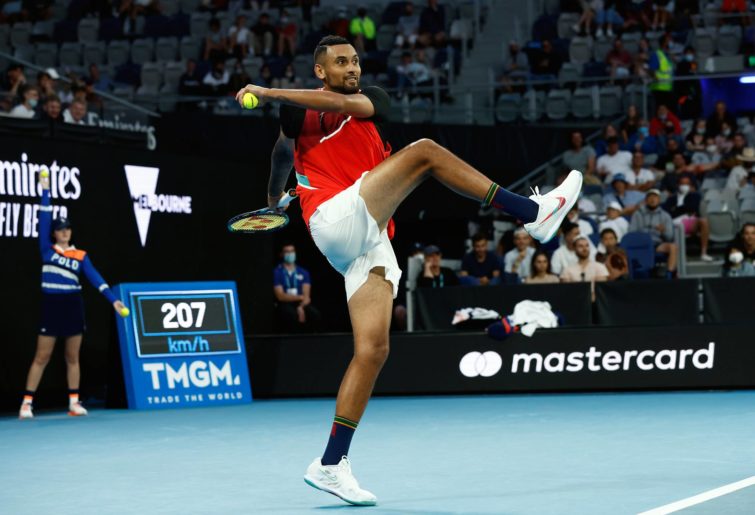 What that melding has created is a disrespectful environment that, as much fun as it may be to those in attendance, Tennis Australia should be looking at closely. The rest of the world is and a perception of a boorish, bullying and immature Australia will be a natural by-product.

When Kyrgios towelled up English journeyman Liam Broady last night to the comfortable tune of 6-4, 6-4, 6-3, what was taking place off court became somewhat more significant than some of the remarkable tennis the Canberra-based Australian was producing.

Broady spoke afterwards of the abuse he received throughout the entire match; booed onto the court before a ball had even been struck and sledged throughout.

His description of the experience as “awful” amidst a “very difficult atmosphere” spoke volumes of the poise and calm the Englishman possesses, with many Australians more likely to be simply ashamed of the treatment afforded a visiting professional athlete.

Kyrgios certainly put on a show, with his Cristiano Ronaldo-type celebrations sending fans into hysteria and cries of ‘Siuuu’ conveniently masking the constant boos directed at Broady. Told to expect something rather confronting, Broady appeared a little stunned as the match unfolded, disrespected and merely a spectator.

One wonders how Kyrgios would manage such treatment should the shoe change feet. Considering his penchant for walk-offs and the little passion he appears to have for the game these days, I would suggest he would not last long at all.

Yet, with the crowd behind him during the show, he seems happy to stand by idly and allow a worthy opponent to be heckled, sledged and booed throughout a tennis match, something about which I look forward to hearing the thoughts of legends like Rod Laver, Ken Rosewall, Evonne Cawley and Roger Federer.

Frankly, it looks bad, sounds bad and the chasm between a Kyrgios match at the Australian Open and honourable competition and sportsmanship is vast, potentially immeasurable.