Despite an explosive 28-point second quarter from the Dockers, which placed the game out of reach for the Giants, Eva is confident that the work her team has done during the pre-season will set them up for success in the next couple of rounds.

“Al [McConnell] was really clear in the room after the game in that the solutions are in our room and in our playing group,” said Eva.

“He is trying to inspire us to bring our good stuff each week, to be disciplined and to connect with the structural components of the game.

It’s fair to say that in terms of on-field success, the Giants have not quite been where they want to be in recent seasons.

Narrowly missing the finals in a couple of seasons, Eva is hopeful that this year will be different.

“We have made a real point of wanting to do things differently this season and move the ball differently,” said Eva.

“We want to be brave with the footy and take the game on.

“That’s a high-risk strategy, but high risk and getting creative helps you score goals and that’s exactly what we need.” 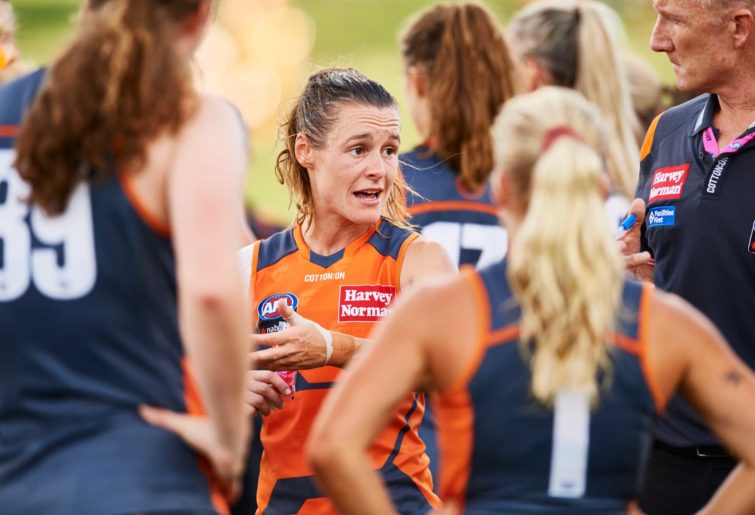 Following a disrupted pre-season due to the pandemic, lockdowns and border closures, the challenges have continued for the Giants in the opening rounds.

Just like many other teams, the Giants have been struck by injury in the opening two rounds.

Both injuries had impacts on the rotations and the structures that the Giants played with in both games.

But the injury concern is wider than just the Giants.

Fortunately, Round 2 was less severe, but in Round 1 there were three ACL injuries to Katie Lutkins, Bri Davey and Izzy Huntington.

“With seasons that are so short, if you miss three to four weeks, that’s almost half the season.”

There has been much commentary on the reasons for these injuries, but it is difficult to discount the challenges faced by AFLW athletes as full-time professional athletes without access to facilities at all times and with staff that are not full-time supporting their programs.

As devastating as these injuries have been, for Eva, there is an opportunity for clubs to think carefully about how they support these players.

“It’s important that teams that are able to adapt, cope and built strategy around players who suffer long-term injuries.

“It’s part of the culture piece, because when you get those things right, players who are injured will still have an impact on a group, a profound impact.

“It’s because of how much they care and the amount of time they put into their clubs. Their contribution may look a bit different than if they were on the ground but it will still be important.”

The Giants’ next game is against the Kangaroos on Sunday at Arden Street Oval.

But without getting too ahead of herself, Eva is looking forward to Round 4 against the Western Bulldogs, when the Giants will make their return to Sydney and play at Henson Park.

“We are bloody excited,” said Eva.

Throughout the year, the Giants will play home games at Henson Park, Manuka Oval and Blacktown International Sports Park.

“I like that we have a couple of home grounds and get the chance to play in front of Giants fans around the state,” said Eva.

“But when it comes to Henson Park, we know there is a huge AFLW following in the inner west so we are hoping to see lots of fans there.

“We can’t wait to play in front of Giants fans again.”