Owen Farrell is in a race against time to prove his fitness to coach Eddie Jones before England’s opening Six Nations match against Scotland.

Farrell had been expected to make his comeback after two months out with an ankle injury in Saracens’ Challenge Cup clash with London Irish on Sunday, but he only resumed team training this week.

The 30-year-old has been retained as England captain with head coach Eddie Jones hoping he will lead the team out at Murrayfield on February 5 – but there is still the possibility he will enter the Six Nations without any game time in the bank.

“There’s going to be a late decision on Owen. This is the first week he’s done any team training. We’ve just got to see how he reacts to the training,” Saracens director of rugby Mark McCall said on Wednesday.

McCall names his starting XV on Friday lunchtime with all eyes on whether his club captain will feature before joining up with England’s 36-man squad at their training camp in Brighton next week.

Farrell has been sidelined since hobbling off against Australia on November 13 and while Jones sounded confident that he would return at the StoneX Stadium this weekend, his availability is not a foregone conclusion.

“Owen has worked hard. He’s been running independently of the team for a couple of weeks now. He’s been involved in some team training this week,” McCall said.

Australian Jones had no hesitation in entrusting Farrell with the captaincy even though his place in England’s backline is subject to ongoing scrutiny with his injury setback compounded by a period of humdrum form.

Marcus Smith has emerged as the flyhalf to steer the side into the 2023 World Cup, leaving inside centre as the position where Farrell can make his mark, while Courtney Lawes proved an accomplished alternative as skipper in the autumn.

Jones believes that Farrell has a key role to play in shaping the 22-year-old Smith’s international development by providing playmaker support, but England’s most capped fullback Mike Brown questions his viability as a midfield option.

“I’m sure Owen knows that if he doesn’t produce for Sarries he won’t be playing because England have got guys who can step up to the captaincy now and do the job,” Brown said.

“I’m not sure about Owen at inside centre. The way England want to play, I like the combination of Marcus Smith, Manu Tuilagi and Henry Slade. That has a run, kick pass threat.”

When Nic Dolly, a keen rugby playing teen with Eastwood, left Sydney airport five years ago with his family for a Christmas trip to… 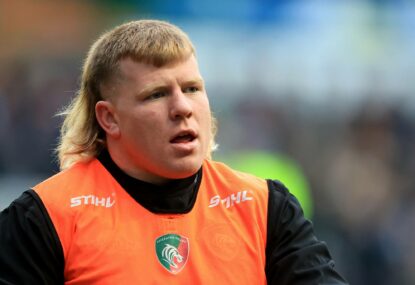 Eddie Jones has resumed his role with Japanese club Suntory Sungoliath just over two weeks after England collapsed to another disappointing Six Nations.

What do we gain by going to the game? The deficit is palpable. It costs. A Round 4 ticket to sold-out Twickenham with England… 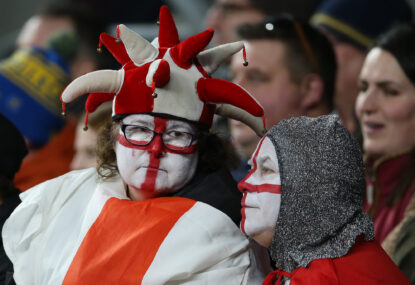 England's Aussie coach Eddie Jones, staring down the barrel of another Six Nations fifth-placed finish, is coming under increasing pressure 18 months out from… 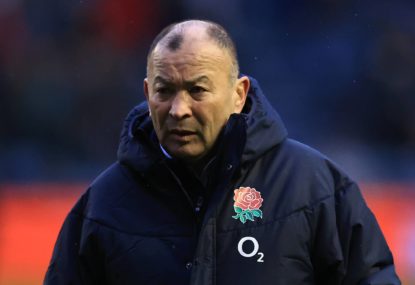 Jarvo finally gets his comeuppance, is poleaxed by security guard

Let's face it - Jarvo had this coming. 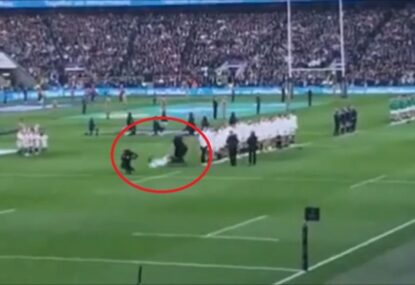 Jarvo finally gets his comeuppance, is poleaxed by security guard