The Sydney Sixers have slammed the banning of Steve Smith from the BBL finals as a ridiculous move that makes no sense.

Smith’s application to play for the Sixers in Saturday night’s qualifying final against the Perth Scorchers has been rejected by Cricket Australia (CA).

Other state franchises voted against allowing Smith to play in the qualifier, a decision rubber-stamped by CA.

Smith, an inaugural Sydney Sixer, wasn’t on the franchise’s playing list this tournament given the star batsman was expected to be unavailable due to Australian commitments.

The cancellation of Australia’s limited-overs series against New Zealand opened the BBL door for Smith.

But CA says allowing Smith to play for the Sixers would have breached rules put in place recently regarding replacement players for squads hit by COVID-related withdrawals.

CA introduced a local replacement player pool (LRP) from which all franchises must pick any fill-in.

Am I the only one who thinks it’s crazy that we pushed on blindly with replacement players simply for content fulfilment, thus losing competitive integrity, yet we won’t allow Steve Smith to be on TVs playing for the team his always represented and led #ReplacementsOverSmudge

Had Smith been placed in that pool, he would have been available for any BBL franchise.

“In creating the central LRP pool, it was agreed that clubs would not be able to contract LRPs from outside the pool for the remainder of the season,” CA said in a statement on Friday.

“The league acknowledges a request by the Sydney Sixers to sign Steven Smith as an LRP from outside the LRP pool.

“This request was denied on the basis that a further adjustment to the league regulations was unanimously rejected by other state associations/clubs in the interest of fairness, noting that other players returning to the BBL from international duty have been retained on club lists throughout the competition.” 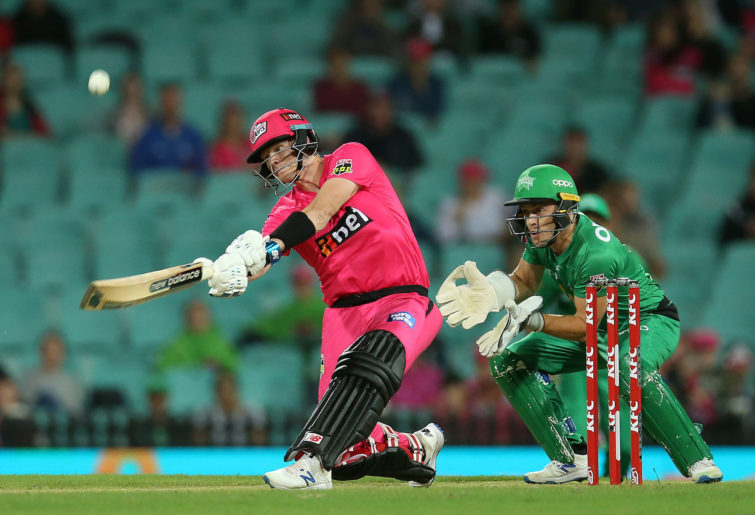 Steve Smith bats during the BBL09 final between the Sydney Sixers and the Melbourne Stars. (Photo by Jason McCawley – CA/Cricket Australia via Getty Images)

Several of Smith’s Australian Test teammates, including Nathan Lyon and Travis Head, have returned to their BBL clubs and will play in the finals – but they were all contracted by their franchises for the tournament.

Sixers veteran Dan Christian says the Smith ruling is “ridiculous” and flies in the face of CA’s desire for the BBL to feature the best Australian players.

“It makes no sense to us as players … it’s just really disappointing,” Christian told SEN Radio on Friday.

“One of the criticisms of the Big Bash when you look at it, having played in a lot of overseas competitions, all the other competitions have the best local players playing.

“So the IPL has got all the Indian guys playing, the Caribbean league has got all the West Indians playing et cetera, whereas we have never really had access to our Aussie guys.

“And now we’re going to have access due to this New Zealand and Australia series being postponed and yet we’re going to ban them playing our domestic competition.

“To have someone like Steve available and then to knock that back, it makes no sense to me whatsoever.”