The newly minted Tassie JackJumpers NBL franchise began with an overtime victory against the Brisbane Bullets, a mind-altering Josh Adams alley-oop with a Jack McVeigh three pointer to seal the game was enough to make your heart feel full for a pro-sports deprived state and also raise some expectation that the JackJumpers might be a competitive force.

What’s followed has been a more difficult picture: a good win against a fairly poor New Zealand Breakers squad, and some narrow defeats to Sydney, Adelaide and Melbourne United enough to continue the optimism.

These strong efforts have been tempered by competing for a half against Perth and South East Melbourne, before being wiped off the floor by both teams in the second half.

The JackJumpers are driven on by an incredibly supportive home crowd, and their defensive intensity has been laudable, but they haven’t quite had the results they’ve needed to be in the hunt for a playoff spot, and this is largely to do with the offensive firepower and consistency that at this stage doesn’t allow them to compete night on night.

In theory, it’s an offensive system that can work, built around their two American mosquitos in the back court, Josh Magette and Josh Adams, and their pick-and-roll with big man and defensive centrepiece Will Magnay. The combination of shooting from the Jack McVeigh and Clint Steindl, and slashing and transitional play from a rotation of Sam McDaniel and MiKyle McIntosh should work and help penetrate the inside of opposition defences. 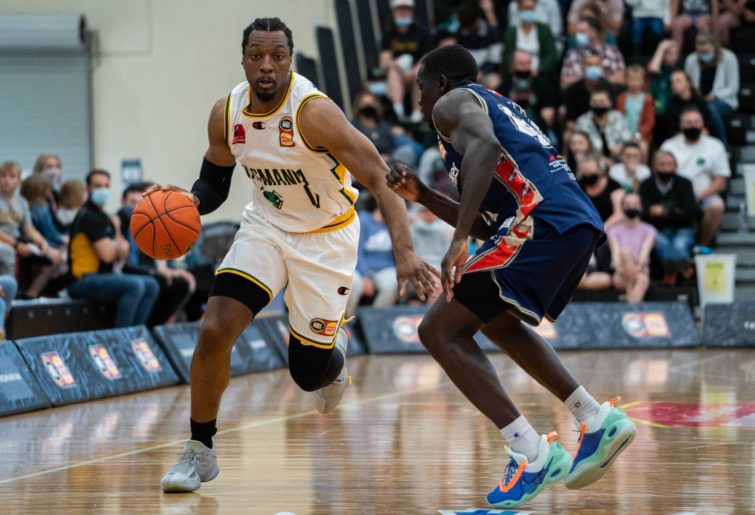 In practice, it doesn’t always work that way inconsistency has been – which is understandable for an entirely new team trying to find its footing.

There have been periods of good offensive functionality, rarely does it come together where three or four of their starting unit having good games on the same night, or for an extended period in the same game.

Shooting the ball has also been a significant issue, perhaps the prime one. The Tasmanians are last in three point percentage in the NBL and apart from Stiendl (shooting a solid 42 per cent clip) and McVeigh who started the year cold and has turned it around to hit about a third of his threes, everyone else in the team is below 25 per cent, or barely shoots enough for it to matter.

These problems have also been reflected at the free-throw line, the JackJumpers are shooting the lowest percentage in the league. Some of these struggles have also come at inopportune moments, such as crunch time against the Kings – where McIntosh’s driving and transition game was almost unstoppable, but a combination of narrowly missing a few finishes that he was fouled on, and not being clinical from the line meant the Kings got off scot free – and Jarell Martin made the team pay on the other end.

This shooting and spacing difficulty has been exacerbated by the fact fact they have needed American import Adams to carry the scoring load, and while he does lead the team in scoring, he just hasn’t been efficient in doing so. What has been most difficult about Adams more than the general efficiency, has also been decision making in key moments.

Adams works best as your streaky, energetic, athletic second option, but as the primary option, it can be tough if the shot isn’t falling on a given night. Magette, the other import, has been a great creator but just OK as an off-the-dribble shooter. His play seems more solid and consistent overall and his assist numbers are good but, like Adams, he can be hot and cold in points output.

These two do have a lot of weight to carry, and potentially the lack of depth in scoring from the rest of the team means they are always at the centre of the opposing defensive attention and are forced to take difficult shots.

With the star players being up and down, combined with the fact that the team is still so dependant on Stiendl and McVeigh to stretch the floor, it does often lead to crowded possessions, and some more experimentation with small ball and different lineups might be necessary.

The problem then becomes whether they sacrifice some defensive capability, which has carried them through games thus far.

Both McDaniel and McIntosh are fantastic mid-size rebounders and without either on the floor it creates a load on the centre rotation to rebound effectively, but neither of them are great shooters. And who anchors the defence in a small-ball capacity if you don’t have Magnay in the middle?

In their most recent game, against the Phoenix, the Jackjumpers were able to match it through the third quarter but once Magnay went off, Mitch Creek heated up and suddenly it was a 20-point lead.

This all paints a complicated picture that will be a long-term project. The good news is that some of it is consistency and working out the system will come with time: Adams and Magette are both new to the league and a lot of the supporting rotation are experienced in the NBL, they too will need time to get comfortable with completely new teammates, systems and locations.

The other good news is that the defensive effort has also been massive throughout the first eight games, with the team leading the league in steals and Magnay leading the league in blocks. The one minor quibble is that if this does drop off, games can slip away like they did in the loss to Melbourne United and Sydney, in which the D ran out of legs towards the end of the game.

This might all sound a bit doom and gloom for the league’s newest team, and the way the roster is constructed, they do have less margin for error than most other teams. But they also have a base to work from and they’ve been competitive in most games they’ve played.

As a new side, what’s more important than results is setting an identity and culture, and embedding the team into the community.

That culture is starting to form, especially with the intensity on the defensive side of the ball and general effort from the players. The local support is also genuinely invested and a there has been great atmosphere for home games, which makes them hard to beat.

The team will naturally have teething issues, but if coach Scott Roth can find the right balance with his rotations and the depth can relieve a bit of pressure on Will Magnay and their import guard combo, the wins will come.