Right now, this exercise would point to a close encounter between the two in July:

The starting XV comprises eight Englishmen and seven Australians, and England provides five out of the eight bench replacements. That suggests a sequence of very closely-fought tour matches in July, with England having the advantage of greater depth, but Australia coming into the series fresher than their adversaries.

In fact, the teams dovetail each other’s needs rather neatly. Up front, Courtney Lawes would be an ideal foil for Bobby Valetini and Michael Hooper in the Wallaby back-row, while Taniela Tupou provides the powerhouse scrummaging tight-head prop England currently lack.

In the backs, Marika Koroibete and Samu Kerevi would give England a punch which may well be absent for the forthcoming Six Nations tournament, while huge young Freddie Steward would fill an Australian hole at full-back.

Who would argue against a finishing back five forwards of Skelton-Itoje-Lawes-Curry and Hooper? It is impact manna from heaven indeed.

The Wallaby first-choice backline puts the finger on the areas where England may struggle to find the right balance in the Six Nations. Why have I picked George Ford ahead of Marcus Smith or Owen Farrell at number 10? On a recent BBC rugby podcast, England coach Eddie Jones made the following comments

“Every brilliant 10 in the history of the game has been accompanied by a stable 12. That’s the combination I think we need to have, and Owen brings that at 12.”
“His reading of the game, his ability to take pressure off Marcus is going to be so important.”

“Marcus could be an absolutely brilliant 10, but he needs to have a guy next to him who is going to run the game for him – and that is where Owen is so good.”

On that basis alone Ford has the advantage, because he has played extensively with Farrell (at international level for England) and with Matt Toomua for his club Leicester. He enjoys playing with another number 10 type as an extra pair of eyes and ears. As he said when he and Toomua were first united at Welford Road back in 2017:

“He [Toomua] is like-minded in terms of that he wants to attack and find space. His communication is brilliant and his vision gives us an extra set of eyes close by to give me information. It’s the best I have ever experienced.”

Smith is different. He plays with the closest analogue to Samu Kerevi in the English Premiership outside him, in the form of giant Springbok André Esterhuizen. Esterhuizen is the outstanding number 12 in the competition.

Likewise, Owen Farrell has played most of his rugby at 10 with Brad Barritt as his inside centre. When Eddie’s England switched ‘young Faz’ to number 10 at the 2019 World Cup, he gave him power alongside (Manu Tuilagi), not a second pair of eyes.

There is a question-mark about how Smith and Farrell will gel: “I still struggle to see where Farrell fits” as ex-England and Lions scrum-half Matt Dawson commented to BBC Sport. Some number 10’s, like Ford and Jonny Wilkinson enjoy the idea of shared responsibility in midfield, and adapt well to it. Others (like Smith and Cooper) prefer to conduct the orchestra and pull the strings themselves. Smith and Farrell may well step on one another’s toes.

The uncertainty extends to the kicking game. George Ford has the made the most kicks (166) for the most metres in the Premiership so far. In contrast, Marcus Smith does not break into the top 20 with his meagre 52 punts. While Ford does most of the kicking at Leicester, number 9 Danny Care (137) bears most of that burden for Harlequins.

There is a huge difference between the kind of kicking game authored by Marcus Smith and George Ford too. In a recent match against Bristol, Ford gave a strategic masterclass, navigating Tigers upfield by keeping the ball just out of the reach of Charles Piutau, the Bears’ kick-return genius:

He either kicked beyond him for a 50/22 lineout reward: 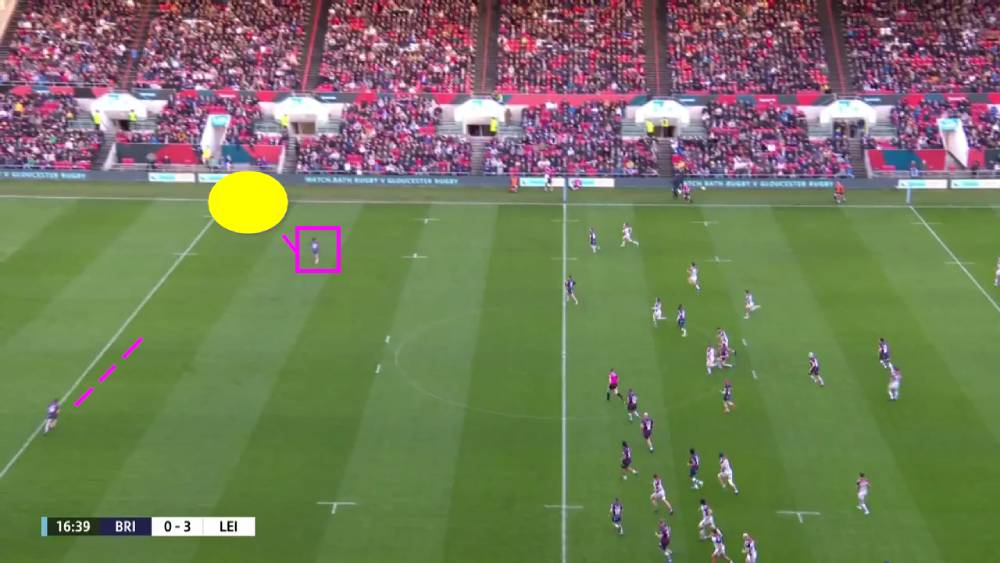 Or he kicked away from Piutau’s backfield zone-of-influence, whenever there was a danger of the ex-All Black returning contestable kicks:

Piutau is on the same side of the field as Ford (the Leicester right) so the Tigers man redirects the punt on to Ioan Lloyd on the other side of the field instead. When Bristol tried to cover the corners, Ford split the two backfield defenders right down the middle:

The length of Ford’s exit forces Bristol to concede a much easier return to Freddie Steward on the next play.

And of course, nobody delivers the dreaded ‘spiral bomb’ with quite the same venom as the Leicester number 10:

The ball burrows up into the clouds, topples over at the apex of its flight, and swirls unpredictably on the descent. Even a kick receiver as good as Bath’s Anthony Watson can get nowhere near the ball.

Smith is not a strategic kick-thinker like Ford, he is instinctive and his kicking game is at its best when it has a much more concrete attacking focus:

The decision-making is instantaneous rather than part of an overall plan: ‘look up, and see the space’.

Marcus Smith reminds Australia’s own maestro Quade Cooper of both his own talents and travails as a ‘young maverick’ making his way in the professional game:

“If you look at number 10’s around the world now, you’ve got Finn Russell, Marcus Smith, Beauden Barrett, Richie Mo’unga.

“Electric, entertaining players who have a skill-set other than just standing in the pocket and kicking the ball. It’s only over the last five or so years that those guys are getting respect and their faces are starting to fit.

“Maybe before, you would be written off as a maverick who is unreliable. The more those guys are empowered and the more they continue to grow, the more kids will come through and want to play like them.

“The media and current players need to get behind these players and support them, rather than smash them and bury them if they have one bad game.

“Hopefully I will play against Marcus Smith one day, but either way I’ll continue to love the work he does.” Quade Cooper said.

Quade may well get his wish in July. At opposite ends of their professional careers, the two still share a spiritual brotherhood in their interpretation of the number 10 spot.

That is Smith, passing, supporting, breaking, offloading and cleaning out all in the same exuberant sequence of play against the Bears. It is all so reminiscent of 2021 new-age Quade – happy not just to make the big play, but to fill in at scrum-half and re-ruck. Happy to help the team, any which way he can: 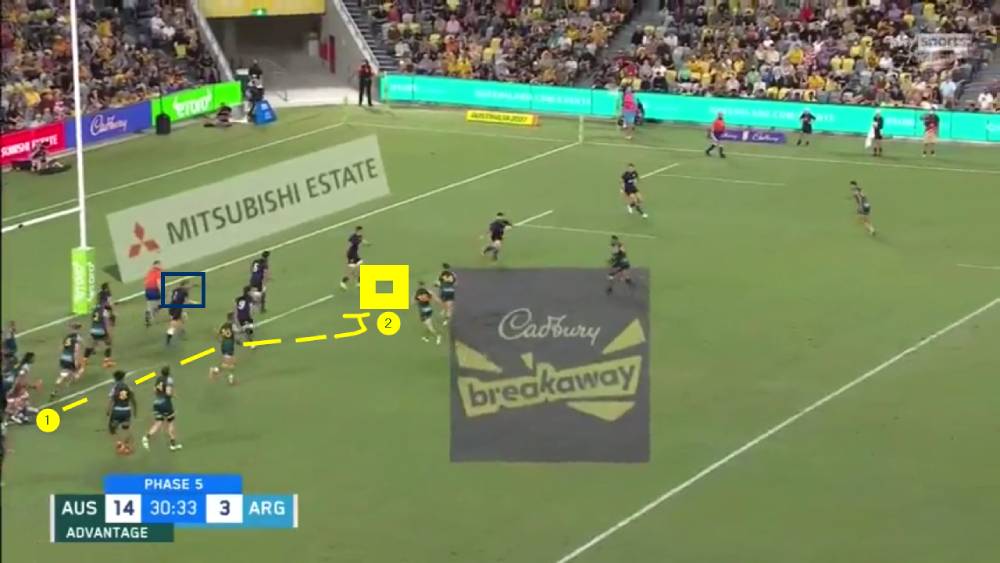 That is Julian Montoya, the formidable Pumas hooker, whom Cooper is taking on, one-on-one at the cleanout.

While Marcus Smith’s face is starting to fit with England, Eddie Jones has his insurance policy firmly in place with Owen Farrell outside him. If things don’t work out, Farrell is there to step in and take control, and do a lot of ‘standing in the pocket and kicking the ball’. An insurance policy, or a gratuitous handbrake?

The other potential anomaly is the selection of Exeter’s Henry Slade at outside centre. Slade’s presence in the same midfield as Smith and Farrell would give England three players who have started at number 10 in international age group games. There may be too many cooks, and not enough pastry to go around between them.
Henry Slade offers an outstanding left-sided presence in the England back-line: 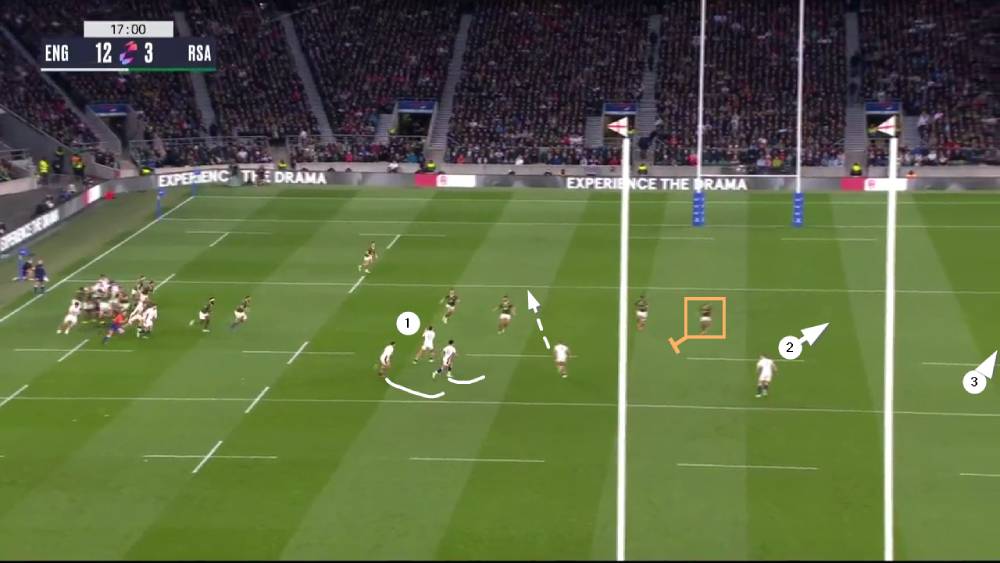 He gives the extra set of eyes as the main play-maker for his club Exeter. He also offers big passing ability outside Marcus Smith, in this instance whipping out a long ball well beyond South Africa’s left wing Makazole Mapimpi from first receiver to create the overlap for Steward. So where does Owen Farrell really fit in?

Summary
Owen Farrell has been the mainstay of England and British & Irish back-lines for a decade, driving the teams in which he plays on with his unique mix of relentless desire, goal-kicking accuracy and shrewd choices of play. How he fits with a team featuring Harlequins’ young tyro Marcus Smith at number 10 is another matter.

George Ford and Faz have a long history of playing together at 10 and 12, Smith and Farrell do not. Smith does his best work off a big power runner at Quins in André Esterhuizen. Like Quade Cooper, he does not really need another pair of eyes second-guessing the play.

The question is whether the Smith-Farrell axis will provide a balance of functions, or merely the dissonance of mixed messages – especially with another play-making type outside them in Exeter’s Henry Slade.

In the bigger picture, the presence of Marcus Smith and Quade Cooper on opposite sides of the fence will be worth the admission money alone in July. Both are cut from the same cloth, even if they are at opposite ends of the rugby career spectrum.

That England tour is already a tantalising, mouth-watering prospect – with every prospect that the Ashes rivalry will be considerably closer than it was in the Michael Cheika era. If you picked a combined team right now, the choices would be evenly balanced between the two nations.

In the immediate future, England have bigger fish to fry in the forthcoming Six Nations. Eddie Jones will know a lot more about which combinations work, and which do not, by the end of the tournament, when the fog war begins to clear.