The Roar
26th January, 2022
88
Join the conversation
5585 Reads
Advertisement
Write for The Roar

The finish to the BBL11 Challenger final between the Sydney Sixers and the Adelaide Strikers was surely the most controversial in the competition’s ten-year history.

With one ball remaining in the game and needing two runs to win, the Sixers would spark Australia-wide debate about the so-called ‘spirit of the game’, when they chose to retire out injured batter Jordan Silk for fully-fit wicketkeeper-batter Jay Lenton, in the hopes of scrambling the winning runs.

The @sixersBBL decision to retire Jordan Silk hurt on the final ball caught us all off-guard ???? #BBL11 pic.twitter.com/GbU2qfBgBi

How decisive the move was will never be known, with Strikers fielder Jon Wells – perhaps out of haste knowing there was no injured runner to target – fumbling on the boundary to gift the Sixers the winning boundary.

The reaction from the Fox Cricket commentary box was swift and uncomfortable, with Australian great Adam Gilchrist, one of the country’s fairest ever players, unsure about the Sixers’ tactics.

Fellow commentator Mark Waugh agreed, saying the move was ‘within the rules, but it’s probably not within the spirit of the game.’

Outside the box, the reaction was more divided, with plenty of scorn heaped on the Sixers and coach Greg Shipperd.

Leading the charge was well-known political and economics journalist and blogger Greg Jericho, who described the retirement as an ‘absolute dog move’.

What crap to retire Silk hurt. Absolute dog move by the Sixers #bbl

The Sixers’ ploy was also quickly savaged for being ‘putrid’ and ‘absolutely disgraceful’, amid laments for the spirit of the game.

Send a bloke out to bat on one leg and two balls later retire him because he can’t run.

If @SixersBBL retire hurt Silk. Thats up there with the Chapoell underarm. Absolute disgraceful #bbl11

However, there was plenty of praise for the Sixers as well, with former England international and BBL veteran for the Melbourne Stars, Luke Wright, calling the move ‘very smart’.

Acclaim came in for the two-time reigning champions’ ‘clear thinking under pressure’, while former AFL player Michael Barlow said Lenton, an assistant coach for the Sixers before being thrust into the game due to the COVID-enforced withdrawal of regular wicketkeeper Josh Philippe, played a key role.

So, is most of the concern that people don’t realise you can retire a player whenever you want, hurt or not?

Finally some proper gamesmanship within the rules of cricket. Arguably the only shrewd tactical decision in BBL history

Lol at those ranters complaining about Silk retiring so Sixers could bring on a quicker runner. Some points:
If Carey doesn’t miss stumping and Renshaw doesn’t drop Kerr early Adelaide win.
They would have run two anyway even if Silk was still in.
It’s within the rules.

Now for what it's worth, I'm not totally comfortable with it, but concede it's all legal. Because…

Waugh’s critical reaction in the immediate aftermath also received a going-over, with AAP journalist Scott Bailey pointing out that the Test great has long been an advocate for teams retiring out struggling batters in T20 cricket.

Mark Waugh, after years of calling for batsmen to be retired out when they aren’t in touch in T20 cricket, on Jordan Silk being retired out:

“It’s within the rules, but it’s probably not in the spirit of the game.”

Meanwhile, Test captain Pat Cummins steered clear of the controversy, while nicely summing up what we all were thinking.

Notably, Gilchrist and Waugh’s initial opinions of the incident cooled substantially once the match concluded, with the latter saying after the match: “I’m happy with it, I’m fine with it.

“All the things that have happened to the Sixers in this tournament – not being able to play Steve Smith, etc. – they’ve played by the rules tonight, so I’m happy with it.”

“I was questioning it as it played out… I thought, ‘hang on a minute, is this right?’” Gilchrist added.

“But thinking about it, I agree with Junior; it is within the rules and it’s actually fairly quick thinking, nifty thinking, and that’s years and years of experienced cricket heads coming together there.

“I can’t do anything other than to sit back and go, well done, they’ve picked up an opportunity there within the rules.” 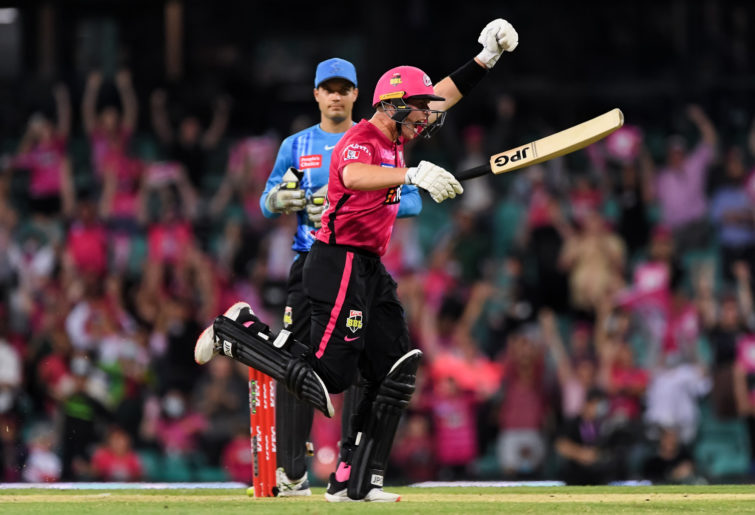 Hayden Kerr scores the winning runs for the Sydney Sixers during the BBL Challenger final.. (Photo by Steven Markham/Icon Sportswire via Getty Images)

Strikers captain Peter Siddle was also fine with the tactic when asked about it after the game.

“You can retire blokes, at the end of the day,” Siddle told Fox Cricket.

“He can retire, it’s not actually a big issue.

“Obviously I was disappointed at the time. It’s just a retirement, isn’t it… that’s just a part of the game.”

Strikers coach Jason Gillespie was fine with the move, too, posting on Twitter that he had ‘no issue with it at all’.

I’ve seen some discussion regarding @SixersBBL tactics late in the game retiring a batter (Silky).
As opposition coach, I had no issue at all with it. They were playing within the laws of the game and it was a sound tactic.
All the best to them for the final.
Dizzy#BBL11

Sixers captain Moises Henriques was also staunch in his defence of his team’s actions, describing the move as ‘clearly within the rules of the game’.

“Unfortunately, we had a guy go down with a hamstring, one of the fittest guys in the league [Silk],” Henriques told Fox Cricket after the match.

“Probably something to do with our schedule and our five flights in eight days and so many back-to-back games.

“He normally bats five, so the fact that he’s gone in to bat at eight – I think we’re sacrificing enough as it is.”