For rent: The east-coast clubs that should host Perth Glory

The recent announcement extending the Western Australia hard border has had a devastating effect on Perth Glory.

The West Australian club have had only one home game this season, and as other A-League clubs won’t be able to get into Western Australia, they’re at high risk of not getting many more, if any at all.

They’ll likely have to find an adopted home ground to play at for the rest of the season.

This is of course very similar to the Wellington Phoenix, who because of border restrictions aren’t able to travel between Australia and New Zealand every week and so are playing home games at WIN Stadium in Wollongong, the home of Wollongong Wolves.

Whether it’s been a success is up for debate. They averaged 2085 people at their 11 home games in Wollongong in the 2020-21 season, the lowest of all clubs, but that’s to be expected for a club playing over 2000 kilometres away from the city they’re named after.

But the best of these crowds was when NPL NSW side Wollongong Wolves played a curtain-raiser to the Phoenix A-League match.

For context, in March 2021 there were two double-headers with the Wolves and the Phoenix. One was on 7 March, with Wollongong playing Manly United at 1pm that day and Wellington playing Perth Glory at 4pm later that afternoon.

The second double-header was on 28 March, the Wolves playing Northbridge FC, who are Macarthur FC’s NPL affiliate, and the Phoenix playing Macarthur later that night.

In appreciation of Wollongong, Wellington wore a red kit in both those games, which is the colour of most Illawarra professional sporting teams, and fans waved Wollongong Phoenix flags. It was great case of a professional club forming a relationship with a semi-professional club, and since then discussion has continued about Wollongong Wolves becoming an A-League expansion club or a national second division team

On the other side of the spectrum another A-League club, Western United, wanted to play their home games at Lakeside Stadium, the home of NPL Victoria club South Melbourne, while their home ground in Tarneit is being built South Melbourne were not happy, however, and managed to block the expansion club from playing seven games at their home. Those matches were moved to AAMI Park.

South Melbourne were bidding for the third Victorian A-League licence back in 2018 but lost out to Western United. One of the reasons given for overlooking their bid was that Lakeside Stadium wasn’t considered an A-League-quality venue. So you can imagine the frustration when a team they consider a rival in the Melbourne market suddenly wanted to move in temporarily.

But this is a different scenario, with Perth Glory being a West Australian team and not being a direct eastern-states competitor. There’s a big opportunity for an NPL club to build a relationship with a top-tier club and show off their stadium, which will be a massive part of any A-League or second-division aspirations.

It’s the best NPL stadium in Australia, and Sydney United need to show that.

Melbourne Croatia: Knights Stadium
Knights Stadium in Melbourne holds 15,000 people, including the Mark Viduka Stand, which seats 4000 people. Western United were in talks to make it their temporary home ground a few years ago, but it didn’t go through

The ground hasn’t hosted many major events since the end of the NSL era but did host the Knights FFA Cup Round of 32 fixture against Adelaide United, which attracted a crowd of 4087.

Melbowing Knights and Perth Glory were actually rivals in the NSL era, propped up by an incident in 2001 when Glory striker Bobby Despotovski did a three-fingered salute to the Knights fans. He and his team were attacked after the match. The rivalry has died down since as the two clubs haven’t played each other since 2004.

Marconi Stallions: Marconi Stadium
One stadium not many people may have thought of is Marconi Stadium, home of NPL NSW club Marconi Stallions. The ground fits 9000 people and has regularly been used for events outside of Marconi games. It is the home ground for the Western Sydney Wanderers women’s team and hosted the 2020 NPL NSW grand final between Sydney United and Rockdale Ilinden.

Marconi Stallions as a club have dropped out of the public eye in recent years. They won the Waratah Cup in 2019 but have been relegated to NPL NSW 2 and haven’t really competed in the NSW top flight. They’re one club that could use a boost from an A-League club. That said, seeing as another A-League club has a base there, there could be some issues 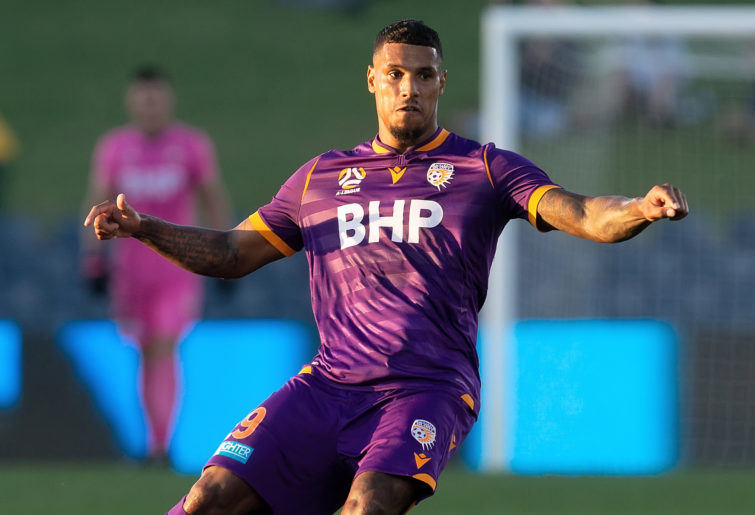 Brisbane Strikers: Perry Park
This is the most likely venue if Perth Glory decide to choose Brisbane as a temporary home. It’s been the home ground of Brisbane Strikers since the NSL finished up and the club entered the Queensland league. The ground fits 5000 people, although at an FFA Cup tie against Melbourne City in 2016 the crowd was capped at around 3600 – though Perth Glory are unlikely to get a crowd higher than that so far from home.

One big advantage of this would be professional football returning to inner-city Brisbane. A-League club Brisbane Roar moved all their home games away from Suncorp Stadium to Moreton Daily Stadium in Redcliffe in 2020, which is about 35 minutes away from Brisbane.

Perry Park is no stranger to hosting big football events, being the preferred venue for most Queensland clubs when hosting FFA Cup matches if their home grounds aren’t suitable, so it should fit Perth well.

While Perth Glory are likely to choose a venue already used by a current A-League club, an NPL club should reach out to them and ask them think outside the box and pick a local football ground.