Celtic’s Tom Rogic was majestic and two Socceroos grabbed their first goals for Australia as the home team swept to a 4-0 win over Vietnam in Melbourne.

After three straight winless games plunged the final stage of World Cup qualifying into rough waters, this was a much-needed and expected victory over Vietnam, without a point from their seven matches.

Socceroos coach Graham Arnold was forced to watch the game from his hotel room – ‘he’ll be bouncing on the bed’ said 10 pundit Archie Thompson at halftime – because of a positive COVID test.

He’ll sleep soundly having banked the three points that keeps Australia third in the group (14 points from seven games) behind Saudi Arabia (16 points from six) and Japan (15 from seven), who beat China 2-0 in a later kickoff.

The top two advance to the World Cup but the third team faces two stages of playoffs to get to Qatar later this year.

Australia travel to the middle east now to face Oman, another crucial three points needed in that match at 2am AEDT on Wednesday.

Australia started in stunning fashion as Rogic had the ball in the Vietnam net within 22 seconds of kickoff only to have the strike ruled out for an offside decision. 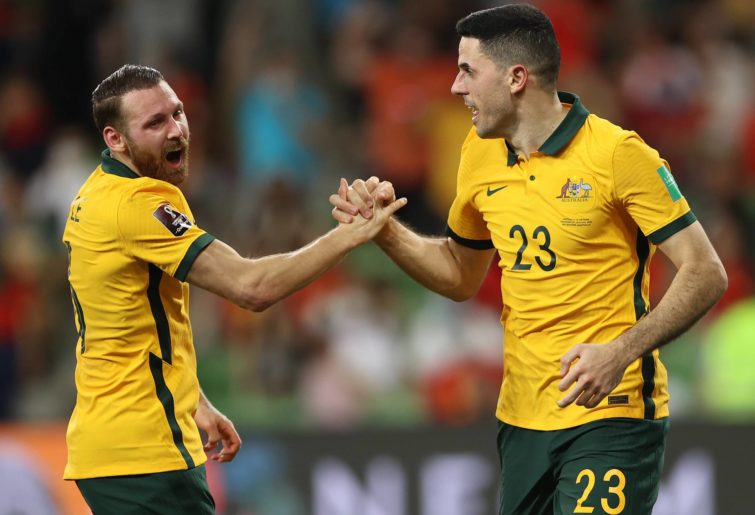 Tom Rogic of Australia celebrates with Martin Boyle after scoring his goal.(Photo by Robert Cianflone/Getty Images)

Australia kept probing and were unlucky not to crack the defence until the 30th minute.

Rogic, drifting to the left had all the time he needed to float a ball to the back post where Jamie Maclaren rose unmarked to head home.

Australia went to the break with a 2-0 lead again thanks to Rogic. He took a quick free kick in the centre of the field, as a Vietnam opponent lay on the ground, and he sprinted forward to pick up a return pass from excellent Mat Leckie, dinking it over the onrushing keeper.

It looked like a rout was on the cards but Vietnam made three changes at the break and charged back into the contest. A big save from Mat Ryan kept the clean sheet intact but the warming signs were flashing.

“4-0 is a fair reflection on it but the first 20 minutes of the second half, you have to give credit to the Vietnamese, they came at us,” said former Socceroo Luke Wilkshire on the 10 postgame coverage. If it wasn’t for a great save from Maty Ryan it could have been a different story.”

Arnold, relaying instructions to Dutch assistant Rene Meulensteen on the bench, removed Leckie and Maclaren. Within minutes Goodwin raced through and finished with a delicious dink.

Everything about this moment is so special.

Goodwin pointed at the sky and burst into tears, revealing it was a tribute to his deceased grandmother, and other people close to him.

Riley McGree became the second player to score his first Socceroos goal within minutes, the new Middlesbrough striker driving home from the edge of the box.

“All the boys that came on made a big difference – that 25 minute period Vietnam were looking very dangerous,” said former Socceroo Mark Milligan.

The Socceroos also gave debuts to Joel King, who was steady in place of missing Aziz Behich, and Marco Tilio off the bench.

“We knew it was going to be a challenge because that’s what international football is about,” said Meulensteen.

“It’s a shame the goal didn’t stand in the first 30 seconds but the players showed good concentration, good quality and took their chances.

“Two new goal scorers is fantastic, two debutants but most importantly it’s the three points, we knew how important it was.”

But it was veteran Rogic who was the outstanding force.

“We saw today so many outstanding performances but it’s that difference of experience and really world class moments,” said Meulensteen.

“What Tommy did there, he set up his own goal. That is the quality you need. Having those players in the middle of the park makes a big difference.”

Milligan added: “Tommy was fantastic. He’s been excellent at Celtic over the last few months since he came back from injury.

His stellar performance was crucial as the @Socceroos overcame Vietnam in Melbourne ????

“I think the key from the midfield tonight is that everyone has been playing in those positions. Aaron Mooy has been sitting in in China playing that No.6 role, Rogic has been a little higher in the pocket and same with Jackson [Irvine at St Pauli] – we know how much Jackson likes to get forward and make those forward runs.

“That was the key to the first half and why we were so dominant.”

“He’s been in that form at Celtic, creating aasists and scoring goals and picking up that freekick, playing it early, recognising they had a player down and the run into the box and finish sublime – he’s just quality.”