Wallabies No.9 Tate McDermott has been elevated to co-captaincy of the Queensland Reds for the inaugural Super Rugby Pacific competition with James O’Connor stepping aside. And the son of Reds legend Michael Lynagh has been linked to a third national team. Welcome to Rugby World.

McDermott, 23, will become the 122nd man to captain Queensland, as he joins co-captain Liam Wright in the Reds leadership roles. Wright will add to his 23 caps as skipper after taking on the position in 2020.

O’Connor is reported to have asked Reds coach Brad Thorn to free him up from the responsibility as he focusses on the Wallabies, and the run in to the 2023 World Cup.

Reds head coach Brad Thorn said in a statement: “Congratulations to both Liam and Tate on their appointment as co-captains for 2022.

“They both embody what it means to be a ‘Reds Man’ – they’re humble and hard-working who uphold the standards of the maroon jersey. 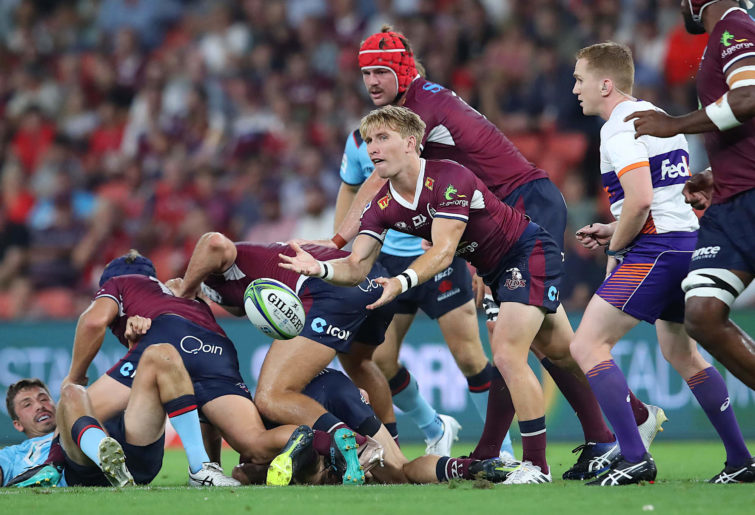 “Liam and Tate both made their Queensland debuts in the same match together back in 2018. They’ve now played more than 50 games for Queensland and have represented their country.

“It’s an honour and a privilege to lead your team into battle. They have the respect of the playing group and also the staff. They will do their state proud.

“It’s important to recognise the job James O’Connor did last year. He was both the captain and one of our on-field drivers which was a big commitment and responsibility.

“There are more leaders within our team, plus players with emerging leadership qualities too which is great for the future growth of our program,.”

The decision to promote McDermott is reward for an outstanding 2020 campaign where he excelled alongside O’Connor in Super Rugby before some impressive performances for the Wallabies.

“To be etched into the fabric of Queensland Rugby, in company with many former great captains of the game, is something my family and I will forever treasure,” McDermott said.

“Upon reflection of my initial chat with Thorny, our job now turns to unleashing the untapped potential within our side.

“We are fortunate to have a core group of experienced players around us who have tremendous skin in the game, and whom we will rely upon heavily to continue with the team first approach we took into our 2021 Super Rugby AU title-winning campaign.

“It would be naive to suggest that the challenge facing us this year isn’t significant, however with Round One of the inaugural Super Rugby Pacific almost upon us it is a challenge we are ready to embrace for Queensland.”

Louis Lynagh, the son of Wallabies great Michael Lynagh, has been approached by Italy to consider playing for them.

The 21 year old was drafted into England’s squad ahead of the Autumn Series but is yet to play a full international meaning he is still available for Australia and Italy – where his mother is from.

He has been in strong domestic form this season and Italy coach Kieran Crowley said he had spoken to Lynagh and former England fly-half Alex Lozowski, who also qualifies.

“I have spoken to them (Lynagh and Lozowski) personally,” said Crowley. “They have made decisions at the moment that I respect. I support them. I’ll keep in contact with them.

“You gave got to talk to them around their desires. Louis is also eligible for Australia. They have some decisions to make.

“They are playing for clubs in England and if they suddenly make themselves available for Italy, how does that affect their contractual status, which is their livelihood?”

“But certainly if they were available, we’d certainly be looking at them. They are all quality players.

“We will keep the lines of communication open.”

Talks of South Africa leaving the Rugby Championship to join an expanded Six Nations competition have been shut down, but a new structured international competition for between World Cups, including the Wallabies, is moving ahead.

Speaking at the launch of the Six Nations for 2022 overnight, the competition CEO Ben Morel also ruled out promotion and relegation in the annual European competition and gave support to Italy despite their dismal recent record.

Morel said he was “extremely cautious on the topic” of expansion and his focus was on plans to introduce significant changes to the existing international calendar.

He said planning was underway with World Rugby and unions about a structured tournament beginning in 2024, after next year’s Rugby World Cup, as rugby tries to build on the success of the Autumn Series.

“In order to give a stronger pathway to the emerging nations, whoever they may be in the north or southern hemisphere, there could be some adaptation to the July or the November windows,” Morel said as reported by the Guardian.

“That could give more competitive matches to those unions … to give them the experience that they need to get to that level. I think a priority right now would be to have a more structured July and November.

“Our current strategic priority is we experienced a really successful Autumn Nations Series … we believe that we could enhance the sporting narrative and give every game a meaning and a link, hopefully culminating in some sort of final weekend.

“In order for this to happen post-World Cup, we’d need to have this finalised before the summer. So these conversations are active. [There are] a lot of people to discuss it with, a lot of consultation … hopefully a good common solution can be identified. Where there’s a will, there’s a way.”

“They’ve got young talent and they’re performing well at the under-20s regularly,” he said. “The conversion to the senior team has been their struggle. They’re putting a lot more resources behind it, and we’ve got all the faith in their management.

“This is a year they’ve got three away games [in France, Ireland and Wales], so we need to be mindful, but they’ve got a young, exciting team. They know what they need to do. I don’t believe there’s a question of credibility [for the tournament].”

Italy coach Crowley, however, said he supported promotion and relegation although felt it was unlikely to be introduced in case one of the strong nations had a poor year. England, for example, finished fifth last year.

“The decisions around Italy being in the Six Nations, that’s board talk and the boards need to decide those sorts of things,” Crowley said at the Six Nations launch.

“If I was given a personal opinion on it, I’d welcome a promotion/relegation system. Then you’re going to get away from all of this. Who’s to say that anyone else would be better than Italy in the Six Nations?

“I don’t think it will ever get to that because other teams might have a bad year, Scotland or Wales or a France, England, Ireland. They might have one bad year and suddenly they’re down.

“Italy has probably got into the situation in the Six Nations is that we don’t know how to win. If you look at games in the past couple of years, they have been very close and then it blows out in the last few minutes. Maybe it’s because they’re trying to not lose, rather than win.”

Farrell out of tournament

Eddie Jones has confirmed Owen Farrell will miss the entire Six Nations after suffering an ankle injury in training with Saracens.

Farrell, who has not played since limping out of England’s win over Australia in November was set to make his comeback last weekend.

However, he injured his other ankle in a collision while training and will be out for eight to 10 weeks, meaning he should be recovered in time to tour Australia mid year.

“It’s a massive blow for him personally and for the team it’s a blow,” Jones said.

“But it’s obviously an opportunity for other guys to step up into leadership roles and for other players to play for that 12 jumper. 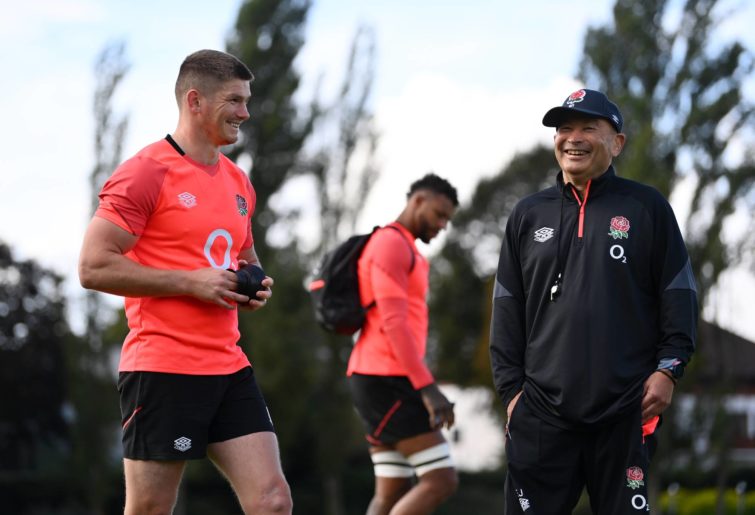 
“Anyone who is involved in rugby understands it is very rare you have your full strength team in.

“This is all part and parcel of how rugby is now. We have enormous amount of protocols, Covid on top of that, you just have to be able to adapt and think as quickly as you can on your feet.”

Farrell’s father Andy is the Ireland coach and he said he backed his boy to bounce back.

“What is he, 30 years of age? You take the rough with the smooth and just move on. I know he is absolutely gutted to have another injury, which everyone would be, especially at this time of year because the Six Nations is massive to everyone. I have no doubt it will whet the appetite to come back bigger and stronger.”

Ireland captain Johnny Sexton, who toured with Farrell with the 2013 and 2017 Lions, added: “Look, any team in the world would miss a player of his calibre, with his leadership. I have been in environments with him before and it’s outstanding.

“Something like this as bad as it feels at the time will lead him on to coming back feeling fresher and hungrier than ever – not that he needs it. He is a hungry fella, but he will come back better.”

The Brumbies and Waratahs meet in a Super Rugby trial in Bowral on Saturday with a few Wallabies set to take part.

Tom Banks, Scott Sio and Noah Lolesio are all expected to get game time, according to a report in the Canberra Times.

Banks hasn’t played since breaking his arm in September, Sio was overlooked for Wallabies duties last year while Lolesio was in and out of Australia’s No. 10 role.

McKellar said there was no point rushing Test players back on to the field after a long campaign with the Wallabies.

“There will be some exciting new, young players that people won’t be aware of yet that will make them sit up and take notice,” McKellar told the paper.

“There will be some familiar faces as well. It would be silly for me to roll out some of the boys who played just about every minute of Super Rugby as well as the international season.

The Waratahs are expected to be without the bulk of their Wallabies players.

Trail blazer stands down as ref

Perrett was the first female to officiate a Super Rugby match in 2020, between the Brumbies and Western Force, and reffed the 2014 Women’s Rugby World Cup final in Paris.

“My years refereeing professionally have been some of the best in my life, every game was an opportunity and I’m just grateful so many were afforded to me,” Perrett said.

“Officiating has taken me to so many amazing places around the world and I’ve been fortunate to meet some amazing people and have had some life-changing experiences, all while doing something I love.”