The Boomers veteran was forced to watch Australia’s historic Olympic bronze-medal play-off win in August from a Tokyo hospital — a week after his tournament was ended by a freak accident that aggravated a neck injury.

Baynes suffered serious nerve damage and internal bleeding that was putting pressure on his spine when he slipped in the changeroom during a group game win over Italy.

Almost two weeks in a hospital in Japan’s capital were spent mainly alone due to COVID-19 restrictions, with the 208cm centre left to ponder the worst.

“The loneliest time in my life was laying in that hospital, going in and out of consciousness, going over my life plan and my goals and just crying,” Baynes told ESPN. 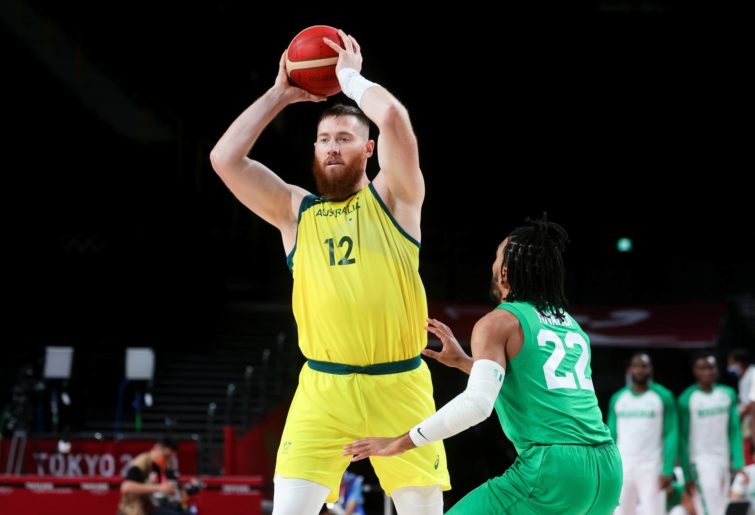 
“My uncle Don had an accident 10 years ago. He’s a quadriplegic.
Advertisement

“My family’s had first-hand experience with this going down. I was so scared.”

Finally able to stand again on his own, 11 days after his mystery fall, Baynes’ next goal was to return to Australia.

That was no easy feat as special arrangements were made for his flight to Brisbane — with almost another month in a local hospital for mandatory quarantine and further rehab.

It has been a six-month grind for the now 35-year-old to get himself back in shape but there is light at the end of the tunnel.

Last week, Baynes posted a photo of himself with his Olympic medal on social media with the message, “The long road back. Grateful for it all.”

On Wednesday he attended an NBL game in Brisbane and is desperate to make it back to the NBA, having been waived by the Toronto Raptors in August.

“I’ve got the want to get there… I don’t know what the path will look like, but I’m going to give it one hell of a crack,” he said.

In a gut-wrenching interview Baynes added: “I couldn’t cope. I was like a combination of burning, fire, knives.

“I needed the pain meds, but they knocked me out immediately, so I had to time it around the games. The nurses showed me so much compassion.”

While Patty Mills and the rest of the Boomers received their bronze medals and went into party mode, Baynes was alone and watching from his makeshift hospital bed in between doses of high-level pain medication. He wept seeing his teammates receive the medals.

ESPN reports that the day after teammates Matthew Dellavedova and Nathan Sobey came to the hospital to bring Baynes his medal.

Baynes was allowed to have visits by team medical staff only – so Delly and Sobey posed as doctors to get past security.

“It was a pretty emotional visit, you know?” Dellavedova told ESPN.

“It had been such a long journey for us to get there and he was such a big part of the program. There were a few tears. I don’t want to get in trouble with the Japanese officials, but I’m glad we were able to get in there.”