“Last week when we were playing at Ardern Street against North Melbourne I realised that we haven’t had our own Pride Round at our home ground due to circumstance,” says Randall.

“With Marrickville being in the inner west, a part of Sydney that is home to so many members of the LGBTQI+ community, it’s a great opportunity for us to celebrate the inclusivity of our game.

“I’m super excited, and I wouldn’t mind being in the crowd, because it will be a fun afternoon.” 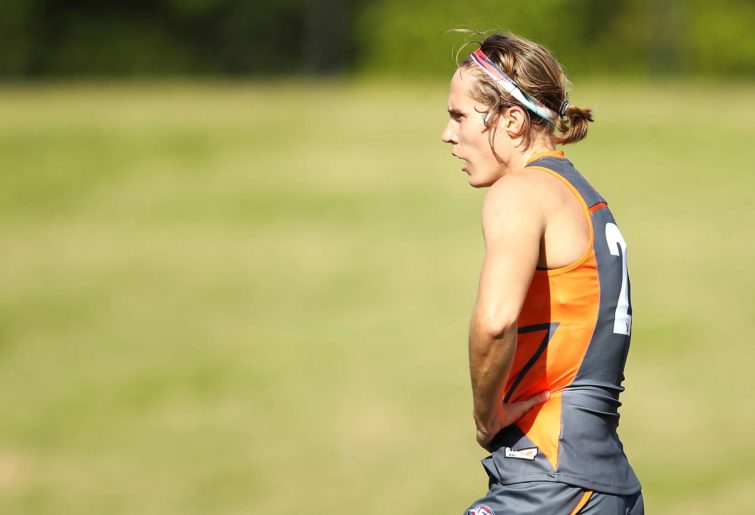 For Randall, one of the most exciting things about the way the AFLW has grown is that the competition has leaned into the diversity that makes it so special.

“We’ve leaned into that aspect of the sport, and I love it. The message is that footy is for everyone; anyone who loves sport and wants to have a good time is welcome.”

So other than a party, what can Giants fans expect from the team tonight?

It has been a tough two weeks for GWS, with a loss to Fremantle by 32 points and then a loss to North Melbourne by 27 points in which the Giants remained scoreless for the first half.

“There is plenty to work on and to take out of the game against North, but we [didn’t] have that luxury with the game being moved to [tonight],” said Randall.

“After the North game I would say the feeling in the rooms was disappointment that we had the chance to exploit some of North’s game and that we didn’t quite nail it.

“As a group we know we had a great preseason; we worked so hard and we tried so many new things and started experimenting with a type of footy I haven’t seen played at the club before.”

Part of the frustration is that Randall knows what the team is capable of.

“We have something to show people and we haven’t quite been able to do it yet or nail it on game day,” she says.

“It so often feels like we need to prove ourselves to the public and the commentators, so I am desperate to show what we have been doing all summer and prove that it is different, that we are a mature side and that we have made some exciting changes.

“I hope that it can come together tonight, and it might sound lame, but tonight we want to flex.”

One of the challenges of the AFLW season is its length. Both Randall and captain Alicia Eva have spoken about the changes the Giants made over the preseason. The team did not get the chance to play a practice match, so in a way it is unsurprising that the squad has not immediately clicked.

In men’s competitions there are more than 20 games in a season. The women’s competition does not have that same luxury. Given the uncertainty surrounding this season because of COVID, it’s easy to understand how some of the players’ emotions might be heightened, particularly given the impact that COVID can have on a team – the Bulldogs, who will be the Giants opposition tonight haven’t played a game in two weeks.

“Al [McConnell] is trying to get us to all calm down a bit and remind us that we have time to build and that we need to continue to work,” Randall says. “Even though the season is short, ten games this season feels like a luxury because we are so used to playing seven games.

“My focus is on accepting the losses we have, taking something simple that I can change and improve and then moving onto the next week.”