The Tasmania JackJumpers have banished their fourth-quarter hoodoo, claiming a 76-71 NBL win over the Adelaide 36ers behind a late blitz from guards Josh Magette and Josh Adams.

Facing a seven-point deficit heading into the final ten minutes, the JackJumpers (3-6) outscored their opposition 24-12 in the period and held on in a tight contest in Hobart.

After relying on Adams scoring throughout the evening, Magette went on a solo 8-0 run to kick-start their offence in the final period to give his side the lead, before the JackJumpers ransacked the offensive glass getting numerous extra possessions.

With scores tied at 69-69, the JackJumpers nabbed four consecutive offensive boards, and when Matt Kenyon’s layup plus the foul went down, the 36ers (3-6) were consigned to a third consecutive loss.

JackJumpers big man Will Magnay also had a strong night, chipping in eight points to go with seven rebounds and three blocks, on a night when 20 of the home team’s 39 rebounds were on the offensive end.

“They just showed a lot of relentlessness, grit, compassion for each other and our fans were fantastic to help us get us over the line,” JackJumpers coach Scott Roth said. 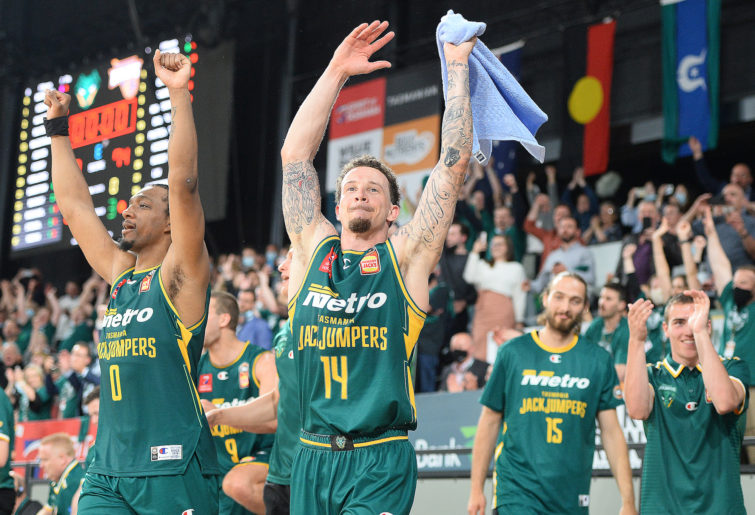 Josh Adams and MiKyle McIntosh of the Jackjumpers celebrate their first win in the NBL. (Photo by Steve Bell/Getty Images)

“Everyone was really engaged and fighting and battling and Tasmania deserves a team that’s very, very work ethic orientated, and I’m just proud of these guys.”

Leading right for most of the contest behind Dusty Hannahs’ shooting, the 36ers were their own worst enemies, giving up a season-high 24 turnovers.

And they were made to pay by the home side who registered 28 points off their poor ball management, which coach CJ Bruton said was their downfall.

“If you look at the stat line, you know that turnover count wasn’t all in the back court, that was in the front court,” Bruton said.

“Offensive rebounding – that gave him an extra 20 shots which anyone that gets 20 shots that’s a pretty good lead to start with.”

Hannahs led the 36ers with 22 points on 9-21 shooting, while Cameron Bairstow had a big night with 11 points, 17 rebounds and three blocks.