At the end of day two of the women’s Ashes Test, thanks to Heather Knight, the game was very much still alive.

At stumps, Knight had scored 127 runs. Incredibly, the next highest scorer for England was Sophie Ecclestone, who joined Knight at the crease at the end of the day.

With England still trailing by 102 at the close of day two, the big question for the start of the day was by how much could England narrow the gap?
By the end of the day the big question was, is there any chance of a result in this game?
Here are some talking points from day three.

What a brilliant innings that was from the English captain. At the end of the first innings, England finished all out for 297. Knight’s 168 not out meant that she contributed over 60% of her team’s runs. When she left the field, the deficit was only 40 runs, taking the game from a position where Australia could have enforced the follow-on, to making the next tactical move in this Test match very important.

Knight’s score was the second highest in Tests by a woman in Australia and she became just the second woman to pass 150 twice in Ashes cricket.

I think that’s well and truly what you call a captain’s knock.

Special mention to Sophie Ecclestone too, who was England’s next highest scorer on 34. The 100-run partnership between Knight and Ecclestone was England’s highest 9th wicket stand in women’s Tests and was almost the highest of all time. Ecclestone provided the support Knight needed, when no other player was able to.

Were England about to gain the upper hand in this match?

After a duck to Alyssa Healy and just four runs to Rachael Haynes before she was dismissed, Australia found themselves in a precarious position at 2-12 with Katherine Brunt once again doing the damage with the ball.

Then the rain came and it did not subside, with play abandoned at 4:25pm.

The rain completely changes everything, with only one more full day of play tomorrow to try and push through for a result.

As a cricket fan, this is extremely frustrating, particularly given how good the pitch for this Test match was and the positive intent that Australia showed with the bat in the first innings.

The last four women’s Test matches have all been impacted.

Why no fifth day? It doesn’t make sense. The women should play the same number of days as the men and I’m interested to hear from the ICC what their reasoning is as to sticking with the four days. At the very least a reserve day should be introduced so the full match can be played.

I feel sorry for the players, particularly Lanning and Knight who will now have to consider tactics very carefully. Even when England were batting, there were suggestions by some commentators that Knight should declare from behind to try and push for a win.

In the past, Lanning has been criticised for not playing ‘attacking’ cricket and not pushing for a result. Given the rain, Lanning might decide that the draw is the best option. I hope she is not criticised for this.

Why should it be on the players to try and force a result through tactics when a solution is available?
Play a fifth day.

Surely we've got to the point where enough is enough.

There is no good reason why the ICC don't have parity on five-day Tests for women in the playing conditions. It's a failure on them and administrators at CA, the ECB and BCCI if they can't create the change. #Ashes

The role of Healy

Healy is one of Australia’s most talented female cricketers and has been part of the journey towards professionalism for many years. Many know her for her cheeky banter behind the stumps, her leadership on the field and her batting prowess (I will never forget her performance in the final of the ICC T20 Women’s World Cup). 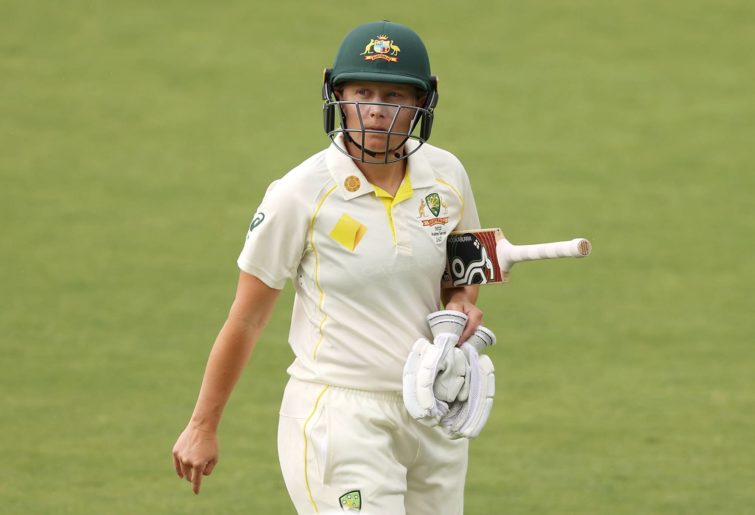 Unfortunately in this Test match, Healy has finished with two ducks. An unfortunate result, particularly given how talented she is and also given how little opportunity she has had to hone her approach to Test matches (due to how infrequently this format is played by women).

Today Brad Hodge suggested that in this format of the game, Healy may be a lower order batter-keeper.

Special moments on and off the field

Despite the rain delay, there was time to honour a number of trailblazing women who played for Australia in the 1970s, 1980s and 1990s. Women like Raelee Thompson, Julia Price, Mel Jones, Alex Blackwell and Sarah Elliott made it onto the field, with mentions to other women currently working on the Test whether as coaches or as part of the coverage like Lisa Keightley, Kristen Beams, Shelley Nitschke, Holly Ferling and Erin Osborne.

This is something women’s cricket is very good at; making sure our current cricketers are aware of the game’s rich history but also making sure that audiences know who they are too. These women were trailblazers and it is important they are recognised as part of the tapestry that is the women’s game.

Congratulations also to the women honoured today as part of the Cricket Australia Awards, particularly Ashleigh Gardner who became the first Indigenous person to take out a major award, being named the Belinda Clark Medallist as the country’s leading female player.