The Roar
30th January, 2022
14
Join the conversation
Advertisement
Write for The Roar

England have narrowly avoided one of the most extraordinary defeats in the history of women’s cricket in the sole Ashes Test, collapsing from 3-218 in pursuit of a final-day target of 257 before holding on for a nail-biting draw with just one wicket in hand.

Seemingly cruising as a half-century from Nat Sciver and a brutal cameo from Sophia Dunkley threatened to tip the series on its head in the final session of the day, England would lose six wickets for just 26 runs as Australia, led by young guns Annabel Sutherland and Alana King, would threaten a miracle victory.

Kate Cross would prove the hero for the visitors, the number eleven holding out 12 nerve-jangling balls to keep the series alive into the ODI portion of the Ashes.

The result leaves Australia with one hand on the Ashes, after England narrowly missed pulling off the greatest chase in women’s Test history.

Set a target of 257 runs from 48 overs, England launched an all-out assault on the target late on Sunday afternoon before finishing on 9-245.

The tourists kept the required run-rate at around six-an-over for the entire chase before getting it as low as 45 runs from the final 10 overs with seven wickets in hand.

But the key wicket of Nat Sciver (58 from 62) swung the match dramatically, as England lost 6-26 and Australia went within touching distance of retaining the Ashes with a win. 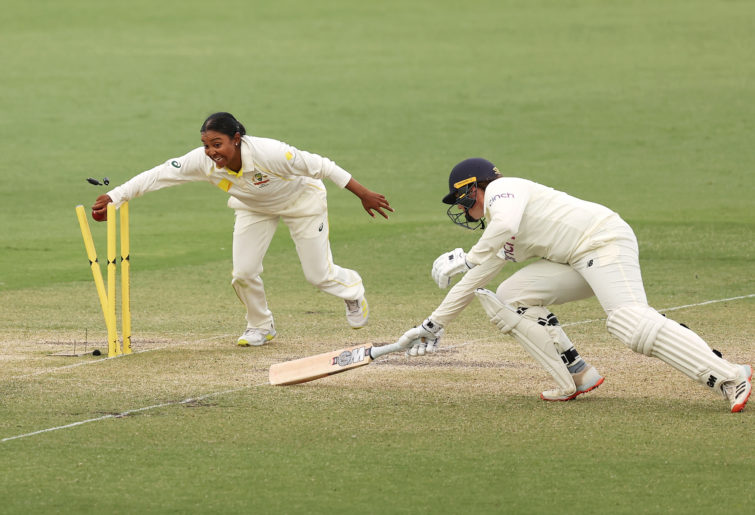 Alana King of Australia runs out Anya Shrubsole of England during day four of the Women’s Ashes Test. (Photo by Mark Kolbe/Getty Images)

Tailenders Kate Cross and Sophie Ecclestone then had to fend out the final 13 balls, as Australia toyed between leaving fielders on the boundary to save the game and attacking for a win.

For all of England’s effort, they must now win all three of the upcoming ODIs to avoid Australia retaining the Ashes for a fourth straight series.

Regardless, the Canberra Test will be remembered as one of the best this century in men’s or women’s cricket after both sides went for the win despite the previous record fourth-innings chase being 198.

In a frantic final three hours, Tammy Beaumont hit 36 from 42 at the top and Heather Knight 48 from 54 balls at No.3 after starting the chase needed 5.35 an over.

The tourists’ hopes looked dashed when Knight went lbw to Darcie Brown, ending a wonderful Test for the England captain after her 168no in the first innings.

Sophia Dunkley looked as if she would follow next ball when also given out lbw, before overturning the decision on review.

She then hit 30 runs off her first 15 balls to revive England’s hopes, and hit Annabel Sutherland for two straight sixes in an over that went for 16.

Sciver brought up a 48-ball 50, before perishing at mid-wicket trying to pull Sutherland (3-69).

Sutherland also removed Amy Jones, before Beth Mooney took a superb catch on the boundary while still nursing her injured jaw to claim Dunkley’s wicket on 45 off Alana King.

Anya Shrubsole was then run out in the third-last over, leaving Cross and Ecclestone to fend off debutante King’s final over to stay in the series.