ANALYSIS: How $40k shortfall saw Justin Langer go from 'elite mateship' to without a friend in the room

When Justin Langer fronted the media for the first time as Australia’s cricket coach, in May 2018, he set out to define what success might look like.

“I like us all to be tight,” said Langer. “If we promote that elite mateship then we’ll be OK because we’ll be good on and off the cricket field.”

On Friday, a tick under four years later, Langer found himself without a mate in the dressing room, as player power, rightly or wrongly, pushed him towards the exit. Amidst months of speculation and unrest, he walked out the door on Saturday.
LANGER QUITS WITH IMMEDIATE EFFECT 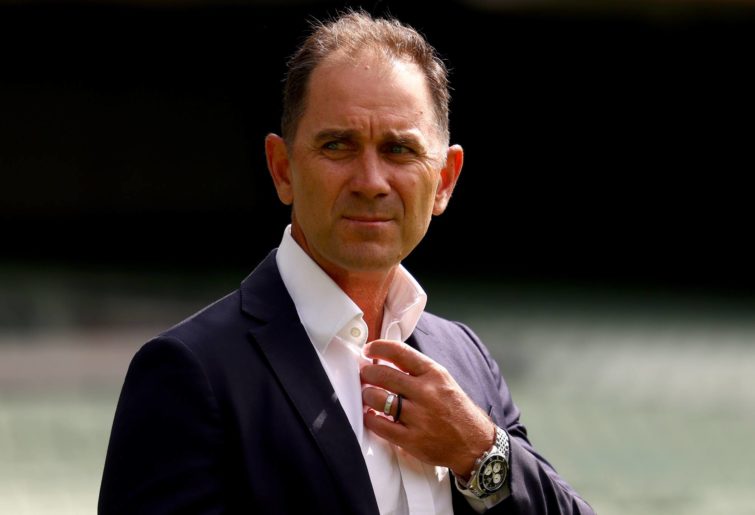 (Photo by Jonathan DiMaggio/Getty Images for the Australian Cricketers’ Association

While many outsiders – whipped up by Langer’s former playing mates in prominent media roles – can’t fathom how Cricket Australia could cut loose a coach on the back of a T20 World Cup win and a 4-0 Ashes series, it’s clear that the issues between Langer and his players have been around for a long time.

Did they ever reach the nirvana of ‘elite mateship’?

Sydney Morning Herald writer Malcolm Conn has been one of the firmest voices on why Langer’s time should be coming to an end. He is writing from a place of direct relationship as the team’s media manager in 2019, around 12 months after Langer took the job.

While the issue has come to a head the closer Langer has approached the end of his contract, there were clear signs of division with key players throughout, with his strong relationship with Tim Paine covering some of the cracks.

When Australia went to England for the Ashes in 2019 they were followed by an Amazon Prime documentary crew, who produced the Test – an excellent insight into the team dynamic.

It showed Langer’s testy exchanges with Usman Khawaja, and a wonderfully insightful moment where Langer kicked over a bin as Nathan Lyon botched a decisive run out of Ben Stokes.

There’s a moment where it dawns on Langer what he’s done and he picks up the mess he’s made.

Langer laughed about it later, telling Fox Cricket that he had input into what did and didn’t air on the doco and at first asked the producers to leave it out because “everyone will think I’m a psycho.”

But reflecting on what the kick and clean routine said about him, he added: “I can be crazy sometimes, but I can be humble the rest of the time.”

Behind the camera there were more serious concerns, and one incident may have been the genesis of the player-coach divide.

Langer was the star of The Test – the colourful expressions – “this is a PVO – a positive vibe club only” – almost scary levels of passion and intensity were well known to insiders, but many fans were getting a glimpse for the first time.

But for all his talk of tightness and elite mateship, the camp was split over the issue of payment.

Langer had made a deal with the producers for a fee of around $40,000 to be involved and left the players to do their own deals.

When they managed to negotiate a fee of $81,000 each no matter how long they spent on screen, he was upset, and unable to let it go.

Fringe players such as Michael Neser and Jack Wildermuth, who barely appeared, earned double what the crazy-humble leading man did.

It was widely rumoured that the pay issue was a friction point in the Australian set up, and Langer later confirmed that was the case in a text message to the SMH reporter Andrew Webster.

“You are absolutely correct in what you heard, and if I look back at that moment in time and with hindsight I should have reacted differently,” Langer said.

Langer was upset when reports broke, telling players so on their WhatsApp group. That exchange was also leaked.

Langer’s last hope of salvaging his job probably ended when Tim Paine resigned in disgrace. From several reports, Paine was Langer’s only ally in the sheds. The coach flew to his side just before the first Ashes Test, a move rightly seen as compassionate in the public eye.

But the emergence of Pat Cummins as a strong leader has sealed the coach’s fate. While the heroes of the mid-2000s think players need the same tough love they had in their era, there’s another school of thought that suggests coaches and captains should stay and go together – and complement each other in style and personality.

Langer might have survived had he not pushed for a four-year deal with full control. There is no way Cricket Australia could grant him that, and the board sought to find a compromise that was unsatisfactory to Langer.

Langer has been on leave since the Ashes, and it’s unsure what his next steps might be or how he will react if the axe falls. Probably with a mix of his considerable humour and self belief.

“People see me as really tough and serious,” he said on his first day in the job in 2018. “But I’m also a bit of a hippie. One month every year I like to grow a beard and not wear shoes.”

In Trevor Bayliss, raised as a strong candidate by the media during the Ashes, Cummins would have a work mate with whom he enjoys a close relationship. Both share a connection with Neil Maxwell, who has had to step away from his role as player manager while on the Cricket NSW executive.

“I laugh at this concept of who’s the boss the captain or the coach,” said Langer in 2020. “Now it’s a massive industry. I say no one’s the boss, we just work together. There’s no bosses, I don’t get caught up in all this rubbish, mate, we’re all the boss and if you all work together you get results.”

What’s clear is that, in this instance at least, the captain is the boss, and he looks like getting what he wants.