West Ham boss David Moyes has defended his decision to select Kurt Zouma for the Premier League win over Watford despite the public backlash over the France international’s cat-kicking shame.

Zouma was named in the Hammers’ starting line-up despite a police enquiry into a video showing him dropping, kicking and slapping his pet cat, and despite the club insisting that it “unreservedly condemns the actions of our player”.

The defender got a first taste of the outcry as his every touch of the ball was relentlessly booed by the Watford supporters.

The away fans chanted, among other things, “RSPCA, RSPCA”, and when Zouma hit the deck after a challenge with Joshua King, they sang “that’s how your cat felt”.

Former West Ham players Joe Cole and James Collins, at the match working as pundits, felt the club had made a mistake in refusing to drop the 27-year-old.

“I think it’s a miscalculation by the club. He could have sat this one out,” Cole told BT Sport. 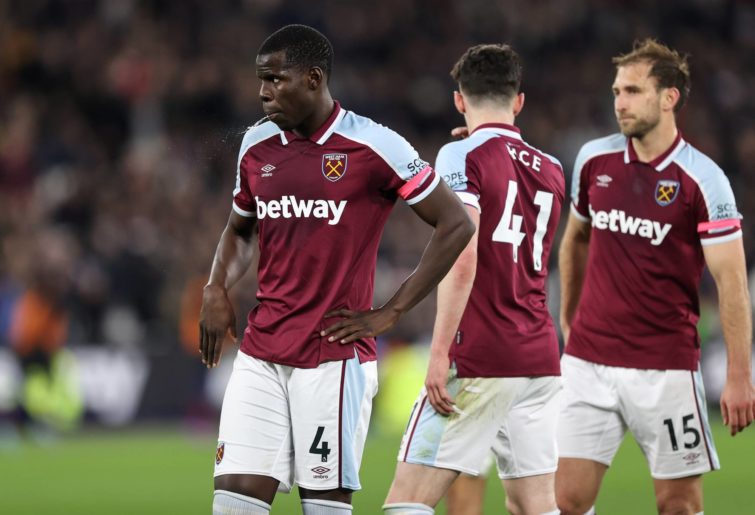 Kurt Zouma of West Ham spits during the Premier League match between West Ham United and Watford at London Stadium on February 8, 2022 in London, United Kingdom. (Photo by Charlotte Wilson/Offside/Offside via Getty Images)

Collins said on BBC Radio 5 Live: “I think there is a lot of anger and rightly so. I personally don’t think it is the right call.”

But for Moyes the priority was clearly getting West Ham’s Champions League challenge back on track after successive defeats, and that meant Zouma in the heart of the defence.

“I’m really disappointed, and the club have taken all the action they can do at the moment behind the scenes. My job is to pick the best team and Kurt was part of that,” the manager said.

“Some people will be disappointed and I understand that. The club are dealing with it as you well know.

“I’ve already spoken to him and we’ll move on as much as we can. We understand it’s not something everybody is pleased about. It’s a really poor situation.

“Was it the wrong call? My feeling was Kurt’s apologised. I understand lots of people won’t just accept that.”

Asked whether he was surprised at Zouma’s inclusion, Hornets boss Roy Hodgson said: “I never concern myself with those things, that’s not my business.”

For his part, Zouma released a statement, apologising for his actions.

“There are no excuses for my behaviour, which I sincerely regret,” the 27-year-old said.

“I also want to say how deeply sorry I am to anyone who was upset by the video. I would like to assure everyone that our two cats are perfectly fine and healthy.

“They are loved and cherished by our entire family, and this behaviour was an isolated incident that will not happen again.”

Meanwhile, Manchester United dropped out of the top four after bottom side Burnley fought back to grab a 1-1 home draw.

In a dominant first-half performance, United had the ball in the net three times but Paul Pogba’s 18th-minute strike was the only one which counted.

Less than two minutes into the second half Jay Rodriguez scored his 100th career league goal — and first in 50 games — to earn the Clarets a share of the points.

He matches his longest drought without a goal since 2010.#PL #OptusSport pic.twitter.com/psjL9y4zy9

A stunning free-kick from Kieran Trippier helped Newcastle beat Everton 3-1 and climb out of the relegation places.

Everton took the lead on 36 minutes when Mason Holgate’s shot was cleared off the line by Fabian Schar, only for the ball to ricochet into the net off unwitting teammate Jamaal Lascelles.

However, the Toffees’ lead lasted a matter of seconds when Holgate suffered similar misfortune as Lascelles’ header from Trippier’s cross came back off the bar and hit him before crossing the line.

The Magpies went in front within 11 minutes of the restart when Allan Saint-Maximin’s deflected cross was bundled home by Ryan Fraser and Trippier sealed the win by sending a superb free-kick beyond England team-mate Jordan Pickford.

The win lifted Newcastle to 17th and within a point of Frank Lampard’s 16th-placed Everton, who are just three points above the relegation places.

At Turf Moor, Pogba marked his first league start since his red card in the 5-0 capitulation to Liverpool in October by firing the visitors in front from a Luke Shaw cross.