A distraught Jarryd Hughes had to be consoled by Australian teammates after his campaign for a second Olympic snowboard cross medal fell flat.

Only fellow triple Olympian Cameron Bolton made it through the first final at the Genting Snow Park on Thursday, but he but was eliminated at the quarter-final stage.

Fellow Australians Adam Dickson and Adam Lambert bowed out at the same stage as Hughes.

The 26-year-old won silver at the PyeongChang Games, but after a troubled build-up never looked in the game on Thursday, qualifying through the seeding round in 28th spot.

The result could cost Hughes a spot alongside Belle Brockhoff, who finished fourth in the women’s event, in the mixed teams race on Saturday despite the pair being reigning world champions.

Australian selectors are expected to make a call on Thursday night with Bolton poised to jump into the hot seat. 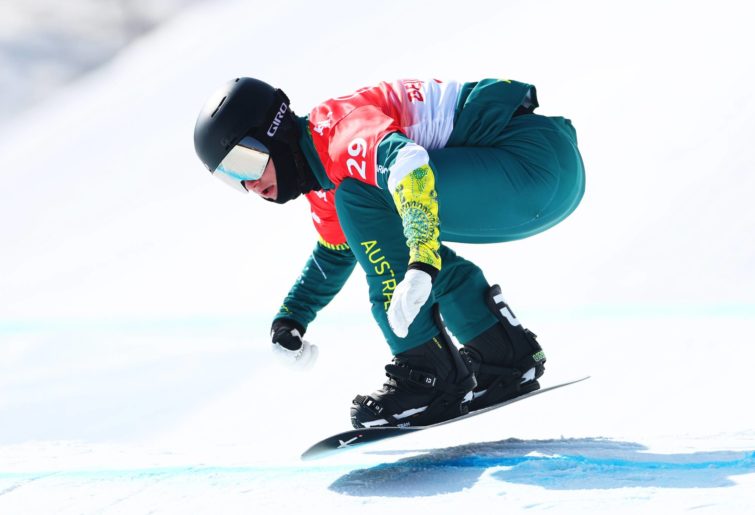 He crashed out of the running, attempting to force his way through the four-man field.

“You can’t make any mistakes and I made a big mistake when I was trying to make my move,” Hughes said.

While he wasn’t looking for a way out, Hughes tore the ligament off his ankle training in August and after being unable to manage the injury, went for surgery.

He had been having regular cortisone injections, including one last week in order to compete.

“It’s been a tough couple of months coming back from surgery and bad injuries, concussion … I’ve been working my arse off to get it back,” he said.

“I’ve been feeling good and I came here ready to perform and I haven’t.

“I’m just going to have to come back in four years to get that gold that I want.”

Bolton, 31, clocked the eighth-fastest time in the first run and won a bronze at the most recent World Cup in Italy.

“I’ve been feeling really good all day so that made it disappointing in that run,” Bolton said.

He said the Australian men would all feel that way after arriving in Beijing with high hopes.

“It’s the nature of the sport but I can tell you there will be four boys after today who are bitterly disappointed with their results,” Bolton said.

“I know they’re all capable of much stronger results on their day.”

The gold medal was won by Frenchman Merlin Surget ahead of American Jake Vedder, while Eguibar took the bronze.