The last time the Young Matildas (under-20s) played was on November 9, 2019 when they lost to South Korea in Chonburi, Thailand, in a third-place playoff at the under-19s Women’s Asian Cup.

The result meant the Young Matildas missed their seventh Youth World Cup in a row. They haven’t qualified since 2006.

The Junior Matildas (under-17s) last played on September 28, 2019 also in Chonburi, Thailand, when they lost to China in the third-place playoff in the under-16 Women’s Asian Cup.

Sadly due to COVID, our future stars haven’t played at the international level since then, unless they made the senior Matildas team.

The 2022 version of the under-20s Women’s Asian Cup (changed from under-19s) was due to be held in Uzbekistan this year.

The under-17s Women’s Asian Cup (changed from under-16s) was supposed to be held in Indonesia. Both events were sadly cancelled due to the ongoing COVID crisis.

This lack of game time at the international level, coupled with the fact many of our youngsters have had little game time in our senior Matildas set-up despite being capped, will have a major impact on our senior team’s ability to compete on the world stage going forward.

Sadly this means the 2023 World Cup in Australia and New Zealand, the 2024 Olympic Games in Paris and the 2027 World Cup.

Mary Fowler, Bryleeh Henry, Remy Siemsen, Kyra Cooney-Cross, Courtney Nevin, Charlotte Grant, Karly Roestbakken and Indiah-Paige Riley have all gone on to be capped by the senior Matildas since the 2019 under-19 Women’s Asian Cup. Of these eight, only Fowler, Nevin and Cooney-Cross are regulars. 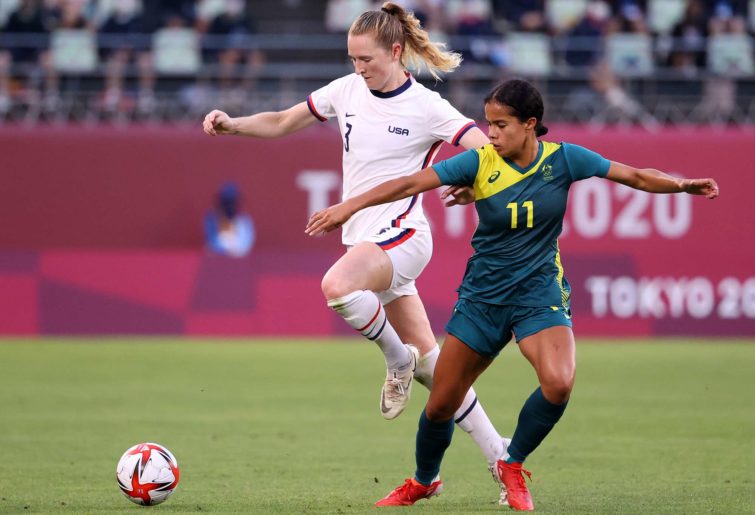 The others have been starved of game time in international football, at youth or senior level. The part-time A-League Women competition doesn’t help either.

While most other countries have this issue as well, many youngsters in the top countries are getting senior game time in their national teams. Many are also playing in full-time professional leagues.

Youth tournaments are starting up again with England, Finland and Denmark playing in the Marbella International tournament next month in Spain.

England’s Young Lionesses (under-23s) started up again last October with two games against Belgium and Estonia. They will play France in a two-match series next week.

Our Asian youth teams like Japan, North Korea and South Korea will play in the under-20 World Cup in August in Costa Rica. The under-17s of India, Japan and North Korea play in India in October.

There has been little word from FA about their plans for the Young Matildas and Junior Matildas. There is concern there is a lack of funding available, which has raised concerns about whether any meaningful games will be organised this year.

After the 2023 World Cup, there is expected to be a plethora of retirements from the Matildas. This will mean many youngsters will be thrown into the deep end heading to Paris 2024 and the 2027 World Cup.

While not precarious, FA’s financial position isn’t great. They have lost $8.5 million in cash over the last two financial years. COVID and the break away of the A-Leagues has contributed to this.

There was talk the real reason the senior Matildas are not playing in next week’s international window was due to financial constraints.

While FA has not publicly said this, and the reason given was player and staff welfare, there is little doubt FA are looking to tighten the purse strings.

The Matildas missed a $1.4 million jackpot after failing to win the Asian Cup in india. The Socceroos will likely need to go the long way in qualifying for Qatar 2022.

Graham Arnold’s team may face two playoff games, one against an Asian opponent at a not yet confirmed venue, and if successful there, the other against the fifth best South American team in Qatar.

The risk of the Socceroos not making the World Cup is a major worry. The participation fee alone is $2 million from FIFA for qualifying.

The TV revenue and additional sponsorship revenue that would flow from going to Qatar would increase that $2 million by a factor of many.

All of this means, the future of our international players – both men and women – and their immediate development is at major risk if FA miss out on the significant cashflow that comes from making the men’s World Cup.

The Future Matildas program, which is run in Sydney, has been a godsend for women’s football over the past four years, bridging the wide gap that exists in elite level women’s football between the NPLW and the A-League Women.

This excellent program has helped provide the polish for the under-17s, under-20s and senior Matildas. But the lack of international and professional football for graduates of this program is a major problem.

As mentioned, apart from Fowler, Nevin and Cooney-Cross, not many others have played serious game time at the international level.

Furthermore, while a number of players from the Future Matildas – Fowler, Riley, Grant, and Clare Wheeler – are playing in European leagues, the rest are still in the A-League Women, which has only 14 games plus finals (three maximum).

The lack of minutes at a professional or elite level for our players was identified in the 2020 FA Women’s Performance Gap report as a major concern.

This eye-opening report showed our young players have only 113,444 match minutes available, compared to leagues in 12 other countries (including top-ten ranked nations), who average 291,660 minutes.

This means Australian female players will find it hard to hit the 2160-competitive-match-minute benchmark by the age of 21 – a figure/age demonstrated to assist players who reach the benchmark to progress to the senior national team and/or opportunities abroad.

Incidentally, this report also identified that Australia played the fewest number of international matches at youth level between 2016 and 2020 (57).

While FA have a lot on their plate, the development of our youngsters has to be up there with the 2023 World Cup as a key area of focus in the next 18 months.