Australia’s reign as T20 world champions has begun with a 20-run (via the Duckworth-Lewis system) victory over Sri Lanka on a sodden night at the SCG, with a strong bowling performance making up for a late collapse with the bat.

On a night punctuated by repeat rain delays, World Cup heroes Josh Hazlewood and Adam Zampa did as they pleased with the ball, claiming four and three wickets respectively to turn a below-par 149 into a more than competitive total.

Earlier, Australia had slumped from 1-80 to 9-145 to raise further concerns about their middle order, after inclusions Ben McDermott (53) and debutant Josh Inglis (23) had helped give the home side a bright start.

Equally concerning will be the form of Mitchell Starc, who continued on from a nightmare World Cup final with an expensive 0-41 off his four overs.

New opener McDermott hit his first half century at this level on Friday as his 53 from 41 balls set the tourists a target of 150.

That target was later revised to 143 due to rain delays, with Hazlewood restricting the Sri Lankans’ hopes of getting going.

On his return to the international arena, the paceman finished with figures of 4-12 – his best in T20 internationals.

In front of a crowd of 12,098 – bolstered considerably by their own lively supporters – Sri Lanka could only finish with 8-122.

Captain Dasun Shanaka opted to bowl first with his Australian counterpart, Aaron Finch opening with McDermott in the absence of David Warner.

Finch went cheaply but McDermott showed the kind of form which made him the top run-scorer in the BBL this year. 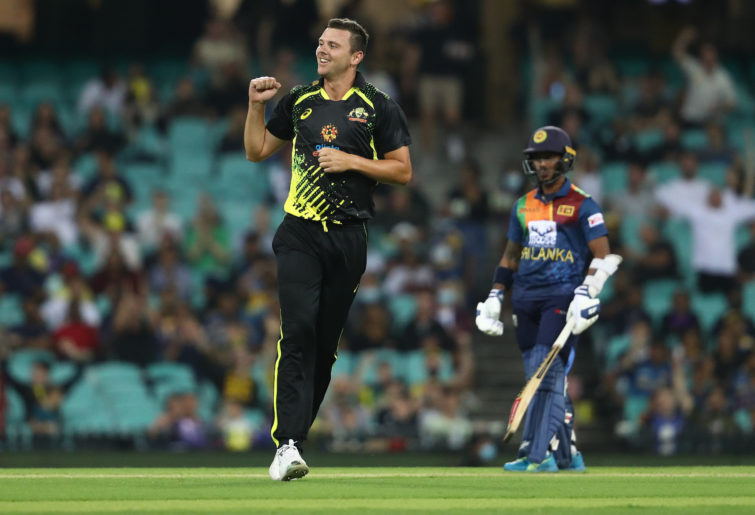 “It feels really nice to get that milestone at the top of the order with Finchy,” McDermott said.

“I’ve come in in different positions over a number of years but it’s really nice to get into a familiar position, having batted there for the Hurricanes this season.

“It’s really nice to contribute for a win tonight for Australia.”

The 27-year-old was able to put on a 50-run partnership with debutant Josh Inglis before the Sri Lankans ripped through the Australian middle order after a rain delay.

Steve Smith and Glenn Maxwell both fell to Hasaranga de Silva before McDermott was lbw to Chamika Karunaratne.

Marcus Stoinis (30) briefly steadied the ship but after Matthew Wade was dismissed, he, Pat Cummins and Mitchell Starc all fell relatively cheaply.

Cummins and Hazlewood claimed the wickets of Avishka Fernando and Danushka Gunathilaka in the first three overs to give the hosts the ascendancy.

It could have been even more commanding were it not for the Test captain dropping Pathum Nissanka’s dipping shot at mid-on when he was on 16.

Nissanka finished with 36 from 37 balls after the crucial introduction of Adam Zampa.

Zampa (3-18) claimed Nissanka and Charith Asalanka in his first over before Hasaranga scooped him into the hands of Steve Smith at cover.

A second rain delay with Sri Lanka on 5-89 after 14.5 overs meant an over was lost and the target was revised to 143.

Sri Lanka were unable to get there with Hazlewood claiming three crucial wickets after the pause.