Precisely determining the mid-point of the 2021-22 A-League Men season is the most imperfect science.

Melbourne City, Adelaide United and Sydney FC are well past that point, having completed 15 matches, yet Perth’s two Match Week 16 fixtures has only brought them up to a total of 11.

A host of teams have played just 12, yet across the board, it does feel that we now have a sufficient sample size of match results in order to form some solid and reliable assessments of the teams’ semi-final or championship prospects.

Today, I will start at the bottom of the ladder and ascend through those clubs currently sitting outside the top six, those hoping for an improved and more settled run through the next phase of the season.

It took a few months for Brisbane Roar to claim their first bag of three points this season and just two further have been added. Perth, Western Sydney and Macarthur have been their victims, with the first two nothing to write home about in their current form.

Warren Moon is battling for consistent performances and the scheduling is not helping one iota. Juan Lescano does not look to be the player for which Moon had hoped and a paltry return of just 11 goals in 12 matches says all there is to say about why the men in orange are not winning.

There have been a few better signs recently, yet overall, 2021-22 has been nothing but a disappointing campaign to this point.

While a few eyebrows might be raised by such a high rating for a team sitting second from bottom, Nick Montgomery has done a ripper job with his squad thus far and frankly, had no luck along the way.

COVID rescheduling has seen Central Coast suffer a frightfully busy succession of matches, refereeing decisions have hurt them on numerous occasions and points have been dropped late in matches, with players seeming physically and mentally fatigued after the increased fixture load. 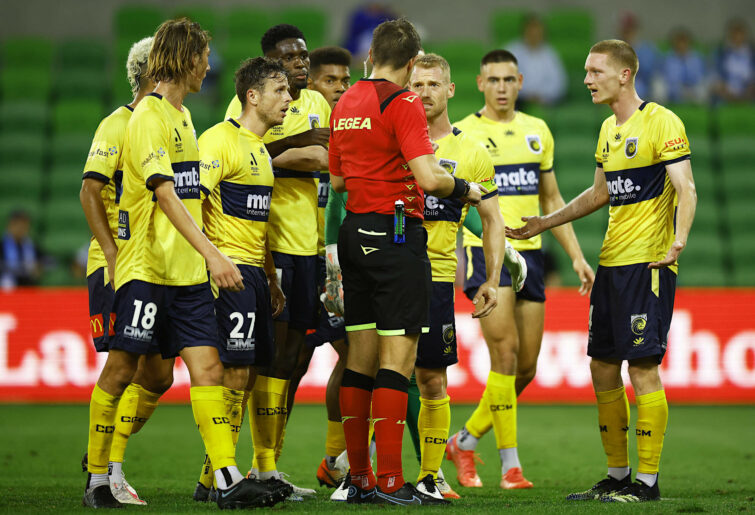 After nine rounds of play, the Mariners sat fourth on the ladder, once again defying many pundits who feared for their 2021-22 season. The chaos of the last few weeks has seen them now slump to 11th and seven points adrift of the top six.

Hopefully, the men in yellow rediscover the magic and have some much needed and rare luck in the immediate future, they deserve it.

Hopefully, Perth officials have submitted an official complaint to the league and requested an explanation as to how they are meant to present as a competitive football team given the circumstances they have been placed under.

A break in play between the 8th of December and the 19th of January made their return to the field unlikely to bring much success and outside a stunning 2-1 win over Sydney FC, that proved to be the case.

Two further extended breaks between matches followed in late January and early February, before the league said, “Okay Perth, it is nice to have you back. Could you play four matches in 16 days for us thanks?”

Essentially, through the fault of no one, Perth has been handed an almost impossible task, whilst being stranded on the road throughout. All the while, Richard Garcia has done his best and there are signs that given some home play and a fair schedule, Perth could well be a team pushing for a spot in the top six.

It is difficult to know how to differentiate the on and off-field goings on at the Wanderers and the impact each has had on the other.

In a nutshell, they play like an overrated football team, full of supposed talent that fails to produce quality more often than not. However, with Mark Rudan stepping in after the departure of Carl Robinson, as well as obvious issues in the boardroom, an argument could be formed that things are about to get a whole lot better for them.

On-field, that hypothesis seems unconvincing, with four losses from their last five suggesting that mediocre they will remain and any bounce often achieved with the arrival of a new manager is certainly not playing out in western Sydney.

I’m liking what I am seeing at the Jets.

Arthur Papas has done a solid job thus far and with a lively front line, four wins and 20 goals have been found.

Consistency will be the primary goal heading into the second half of the season and should he be able to engender it, look out!

Most concerning is the Jets’ form against the top sides, with losses to Western United, Macarthur FC, Adelaide United and Melbourne City suggesting that upsetting in-form and more consistent teams is beyond them at this stage. However, there is improvement to be found in the Hunter and semi-final action is well within their grasp.

Three cheers for the Wellington Phoenix, they deserve every one of them.

Like the Mariners, Ufuk Talay’s Wollongong-based team has faced enormous hardship this season, yet unlike Central Coast, has been able to maintain performance. Unbeaten in the league since New Year’s Day, a season has been resurrected after it began rather shakily amidst all the confusion and panic around the Omicron variant.

After four early losses, the Phoenix are now unbeaten in eight and on the cusp of moving into the top six, with a well-deserved rest bound to have them ready to face Melbourne City this coming Sunday.

Everyone’s second favourite team have a real opportunity to do something special and I, for one, would love to see them in the mix when it comes to the jostling for a top-four spot.

Make sure you visit The Roar on Thursday, when I’ll cast an eye over the top six and grade them on the basis of their performances thus far.