The medal is named after FA Hall of Famer and women’s football pioneer Pat O’Connor, who started playing football at Bass Hill RSL, before blazing the trail for women in NSW and indeed Australia.

Hunt hasn’t played since Round 8, but her 11 votes were enough to stay ahead of Copus-Brown, who finished one vote behind.

Pat O’Connor, from her home in Perth, paid tribute to Hunt.

“Congratulations for a terrific season to Clare, a player to watch for the future,” she said.

“[It was] a close competition between Clare and Libby.

“Both girls are a credit to their club. We are all looking forward to next season already.

“Well done to the rest of the team as well for fighting till the end.

“[I] wish l could have been there to present the medal personally to Clare. Hopefully next year.”

A busted shoulder against Adelaide United ended Hunt’s impressive campaign early, with many touting her form as worthy of a Matildas cap. 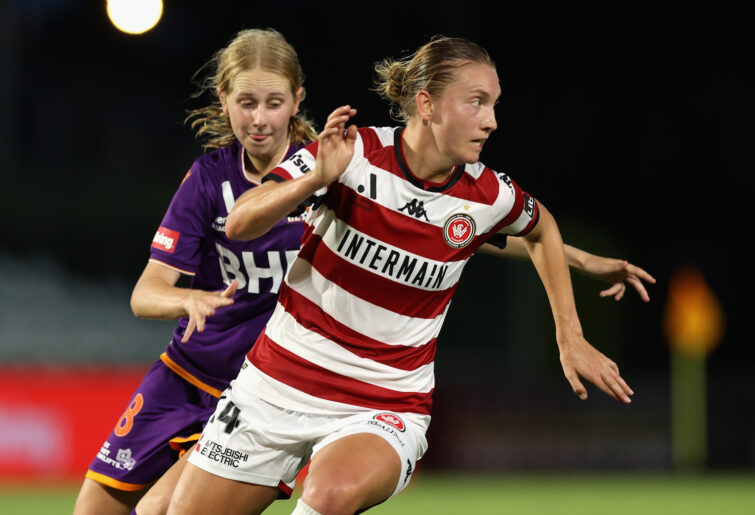 Hunt transferred from Canberra at the start of this season and was partnered with reigning Wanderers Medallist Cooper in a tough centre-back combination.

The Wanderers’ women were mean in defence and even kept one of the title favourites Sydney FC goalless early in the season.

Copus-Brown enjoyed a strong back half to the season, with the fiesty midfielder finding her feet in the last month after an inconsistent start. She accumulated eight of her ten votes in the final three games.

Gallagher started the season well, polling well in the early rounds before falling away in the later half of the season.

She missed a few games towards the end through suspension and injury. Her versatility this season was impressive, and the experience gained will hold her in good stead for the future.

Huynh and Cooper are Matildas representatives and know what it takes to play at the highest level.

Huynh came in part way through the season and showed glimpses of her best. Cooper has been a stalwart for a number of years and had another consistent campaign.

Langman was exceptional between the sticks, making 45 saves out of 67 shots on target. She ensured the Wanderers’ women minimised blowout scorelines this season.

Ashlie Crofts won the Golden Boot award with three goals this season. The childhood Wanderers fan showed plenty of potential as the season went on.

Overall it was a disappointing campaign for the Wanderers’ women, but there is always a silver lining. First-year coach Cath Cannuli would have learned as much as the players.

Two 15-year-olds in Alexis Apostolakis and Ella Abdul-Massih had impressive debut campaigns and both appeared to grow as the season went on.

Eighteen-year-old Matildas forward Bryleeh Henry was also one of the most consistent players this season. Her tireless work rate gave the Wanderers’ women plenty of spark up front.

There were a few games where the Wanderers showed they could compete with the best. Quality performances against the top two teams Melbourne City and Sydney FC throughout the season should fill fans with plenty of hope.

It was simply inexperience and tinkering with line-ups that cost them in the end.

With the likes of Hunt, Copus-Brown, Huynh and Cooper leading the way, and with a lot of young talent in the squad, the future is bright at Wanderland heading into what will be a crucial 2022-23 A-League Women season.