Kevin De Bruyne and Riyad Mahrez both scored twice as City condemned their rivals to a humbling 4-1 loss on Sunday.

“I think the worst thing you could say about United is they did give up,” Keane told Sky Sports.

“For a player in a derby, or any game, to give up, it’s unforgivable really.

“The beauty of top-level sport is there is no hiding place. We saw all United’s shortcomings today.

“That’s what I don’t understand. The manager will be criticised, and the tactics, but players not running back when they are playing for Man United is unacceptable.

“They threw the towel in, which is shameful.

“I forgive mistakes, but you’ve got to run back. There’s five or six players who should never play for Man United.

“A couple of lads in midfield, (Aaron) Wan-Bissaka, Fred, (Marcus) Rashford came on. I could go on. And City weren’t even at their best. They didn’t have to be.

“They gave up, Shame on them!”

Former United and England full-back Gary Neville was equally scathing in his assessment of their performance.

Sky Sports pundit Neville said: “Manchester United ended that game like an absolute shower. They were a disgrace.

“They came up against a proper team and they’ve been given a proper doing.”

The 187th Manchester derby started frantically on Sunday but ended with the Premier League champions in cruise control as Pep Guardiola’s leaders restored their six-point advantage over Liverpool at the top of the standings.

De Bruyne’s early opener was superbly cancelled out by former City prospect Jadon Sancho, only for the magnificent Belgium star to strike his second and Mahrez to grab a second-half brace in a deserved win over Ralf Rangnick’s wretched Red Devils.

It was a rare Etihad Stadium defeat for United, whose hopes of a fourth straight away win on enemy turf in all competitions were hit inside five minutes when the hosts all too easily sliced them open.

The shine was taken off De Bruyne’s 50th Premier League goal when Sancho ended a great United break with a fine finish, but the 30-year-old would soon have another when firing home during a melee.

The Belgium playmaker then turned provider when Mahrez lashed home from his corner – via a slight touch off hapless Harry Maguire – and the Algeria international added to the party atmosphere by grabbing another at the death after a VAR review.

This is just the second time City have done the double over United since Guardiola took over and represented a second league loss under Rangnick, who was without Cristiano Ronaldo, Edinson Cavani, Raphael Varane and Luke Shaw.

The interim boss decided to play Paul Pogba and Bruno Fernandes as a front two against City, who all too easily bypassed United’s front six in the fifth minute.

Bernardo Silva ended up with the ball and linked up with Jack Grealish down the left, before cutting back from the byline for De Bruyne to score from close range.

United countered superbly in the 22nd minute as Pogba put Sancho through. The 21-year-old cut past Kyle Walker and Rodri before bending a strike into the far corner from the edge of the box.

The joy was short-lived when Phil Foden sent a looping header onto the woodwork and produced a moment of magic in the 28th minute, when he superbly flicked the ball over Victor Lindelof and fired at De Gea.

The United goalkeeper stopped that effort but De Bruyne followed up to score his second.

Any hope of a comeback was extinguished in the 68th minute. De Bruyne fired over a corner from the left and Mahrez met it with a superb half volley that flew in via a slight touch off Maguire.

An offside flag denied Mahrez his second of the day only for VAR to overturn the initial decision, sealing the 4-1 win.

Martin Odegaard opened the scoring when he capped a scintillating move on five minutes, before Watford’s Cucho Hernandez went one better with a fantastic overhead kick six minutes later.

The lively Saka finished into the top corner after half an hour, before Gabriel Martinelli wrapped up the three points by finishing sweetly from outside the area after the break – although Moussa Sissoko’s late response did keep the Gunners on their toes.

The win enabled Arsenal to move up to fourth in their pursuit of Champions League qualification for the first time since 2016. 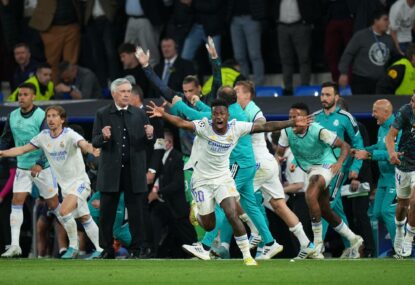 Man City still have the edge in the Premier League battle with Liverpool after both sides won - but at the other end of the table, Norwich have been relegated. 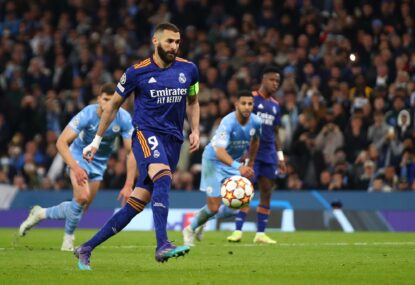