Oh man, the Melbourne Rebels are in a bad place right at the moment, aren’t they?

There were plenty of voices in pre-season more than ready to write them off, but I wanted to believe that another year together and another pre-season together would make a difference for a side that did disappoint in 2021.

And yeah, ‘this might be the year they click’ has been said more than a few times about the Rebels. But I did think there was an element of truth to it. It’s popular again to say that a much-improved NSW Waratahs is good for Australian rugby, but I’m pretty sure that a much-improved Melbourne Rebels would be quite handy, too.

But watching them completely unravel at the hands of the Fijian Drua on the Sunshine Coast on Friday night, and thinking about that performance ever since put a U2 song lyric in my head:

Now, I’m not the biggest U2 fan in the world – I’ve only just while writing this column discovered Bono wrote this song based on an argument about suicide he wished he’d had with close mate and INXS front man, Michael Hutchence – and I don’t really know why this of all songs came into my mind.

But it does sum the Rebels situation up well.

They are stuck right now. Everything that can go wrong for them, has.

And it’s really hard to see what they can do to get out of it.

And it’s hard to see what they can do because so many things need to turn around. Further underlining this problem is that they now have more games to play against New Zealand-based opposition than Australian.

It’s often said about Super Rugby that it’s a sprint rather than a marathon, and what the Rebels wouldn’t give right now for the ability to slow this year down.

Their injury toll is as well-publicised as it is long. 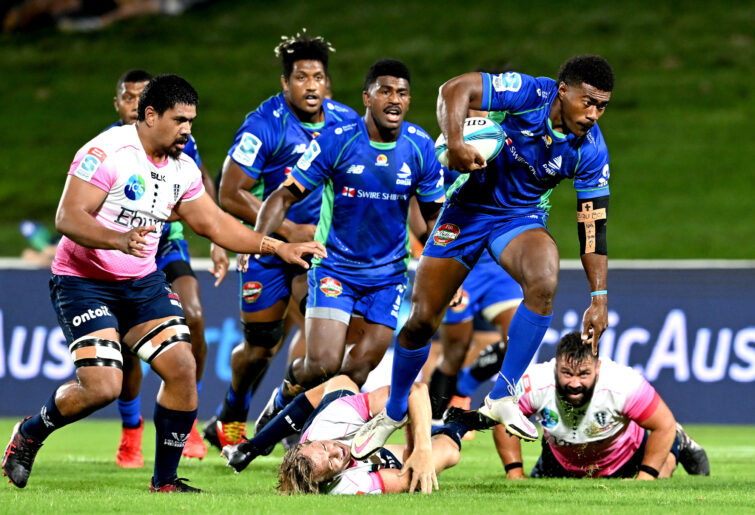 Vinaya Habosi of the Fijian Drua breaks away from the Melbourne Rebels’ defence. (Photo by Bradley Kanaris/Getty Images)

Geoff Parkes made the great point yesterday, that “for now, losing experienced players in clumps at the end of each season, without sufficient continuity from year to year to provide a stable base, the Rebels look likely to continue to struggle”.

And they will. Whether it’s 14 or 19 players out injured right now doesn’t really matter; what matters is who the 14 or the 19 include.

Losing only six of those eleven names would hurt, but losing all of them has bordered on worst case scenario for Kevin Foote and his coaching team.

But the injuries are only part of the story. They’re just not playing very well at all, which in turn is compounded by having so many new and inexperienced players forced into an unwinnable situation.

When we watch them play, we are literally watching a team learning how to play professional rugby together on the field, trying to build combinations with TV cameras capturing every angle.

This shouldn’t be happening at Super Rugby level; this is exactly what the NRC was for. And the ARC, fifteen years before that.

I won’t surprise anyone that the Rebels are in the bottom handful of teams in all the major team stats.

They’ve scored just five tries in three games, and three of them came last Friday night against the Fijian Drua.

They’re last for clean breaks, below even Moana Pasifika. They’re last of the ten teams to have played three games for defenders beaten, and only just ahead of the Chiefs’ tally from two games. They’ve lost every fourth scrum on their own feed. They’re in the bottom few teams for carries and for metres carried.

They’re mid-table for offloads, with 20, which is something. But then when you tally up 53 turnovers in three games, you realise it’s not without risk.

The Queensland Reds and Brumbies have started 2022 well and their record reflects that. The Western Force have taken some strides forward in key areas, and the improvement of the Waratahs is plain to see.

If anything, the progression of the other Australian sides is exacerbating our perceptions of the Rebels at the moment because it’s like they’re standing still.

I wanted to believe they’d be better in 2022, because they surely couldn’t be worse than in 2021. But they are, and it’s sad to watch because there are some good players – some very good players – among them. As all these players return and get more training and preparation time, and then more game time, they will start playing better rugby.

And they will, because maybe Bono knows something here, too. Stuck in a Moment You Can’t Get Out Of finishes in a position of hope, remembering it’s a conversation he never had but bit wished he did.

It’s just a moment
This time will pass

The Rebels have to believe this is true and have to train and prepare for games, and then play those games like it is.

They will get better this year because they just have to.