The great American Football coach and doyen of the commentary booth, John Madden, passed away last Christmas at the ripe old age of 85.

In his nine-year tenure as head coach of the Oakland Raiders, he achieved a winning record (75%) which still the highest of any NFL coach with more than 100 games under their belt. He helped the Raiders to their first ever Super Bowl win in 1976 along the way.

His 30-year career as a commentator lasted longer, and developed his profile even further, so much so that the John Madden Football game has accumulated over $4 billion in sales and appeared on over 30 different media platforms since its inception in 1984.

At times, it has felt that booking a spot on the annual All-Madden team is more important for an NFL ‘baller’ than playing in the real-life Pro Bowl. As the man himself explained in the blurb to his book Hey, I’m talking Pro Football!

“What does it mean to be All-Madden? It’s a whole range of things… It’s about Jack Youngblood playing with a busted leg, Lawrence Taylor wreaking havoc on the offense and Reggie White making the other guy wish he put a little more in the collection plate at church. It’s about a guy who’s got a dirty uniform, mud on his face and grass in the ear hole of his helmet… It’s style and substance, like Jerry Rice, who feels, ‘If you don’t look good, you can’t play good’. It’s candy wrappers flying out of [350-pound lineman] Nate Newton’s pockets.”

John Madden was revered by fans because he distilled the essence of what ordinary folk loved about the game of football.

Coaching is a simple business – or at least, it should be. A lot of its success depends on the willingness of the coach to listen to the real facts, not just those which are more palatable, or heard and accepted in public. The good news is that there was plenty of evidence of Australian coaches happy to embrace the inconvenient truths in the two main games at the weekend, and move the fortunes of their teams forward as a result.

One of the common questions asked, not least in last week’s Coach’s Corner column, concerns the difference between the number 6 and number 8 positions in the professional game as it is now.

The short answer is ‘Not much’. The positions are virtually interchangeable. Coaches in previous eras usually wanted their best ball-manager at the base of the scrum at number 8. Because of the declining number of scrums relative to breakdowns, and the decreasing amount of usable ball emerging from the set-piece, that is no longer a primary requirement.

The Roar experts Brett McKay and Harry Jones analyse Super Rugby week three, dig deep into the stats and name some potential Wallabies and All Blacks bolters. Play the podcast below or find it on your podcast apps.

The Brumbies feature Australian number 8 Rob Valetini on the blind-side flank, with ‘Pistol Pete’ Samu as eighth man. But Valetini jumps at the back of the lineout (he won three lineouts there versus the Waratahs), with Samu at the front. Where Samu does his best attacking work out in the wide channels, Valetini is still used as the primary ball-carrier infield and on first phase from lineout. The number on the back of the jersey matters not one whit.

Bobby Valetini is there to provide the inside power, Pete Samu the outside inspiration and finishing finesse:

The Brumbies like to use Valetini to provide the initial breaking power in midfield, and the first bust occurs with force of a runaway train. The Wallabies main man runs straight past the tackle of Charlie Gamble, and over the top of covering halfback Jake Gordon on a barnstorming run. A couple of phases later, he is one hand to supply a dominant angled cleanout on Hugh Sinclair, and set up the scoring pick and go surge by Nick Frost. There is no sealing off on a latch by Bobby Valetini!

It was Valetini, not Samu, who was used the first wave ball-carrier around both ends of the lineout:

The Waratahs coaching staff have broken the mould and bitten the bullet by accepting that their best forward ball-carrier is a prop (Angus Bell) and they are looking to use him in the same way that other sides would use their number 8 forward.

At the beginning of last season, I wrote the following article featuring the use of Melbourne Rebels’ tight-head Pone Fa’amausili as the main midfield ball-carrier from lineout. They also employed him on kick returns (at 0:35 on the reel).

Now Darren Coleman is doing the same with Bell, and the young prop responded with another outstanding display in all aspects on Friday evening: 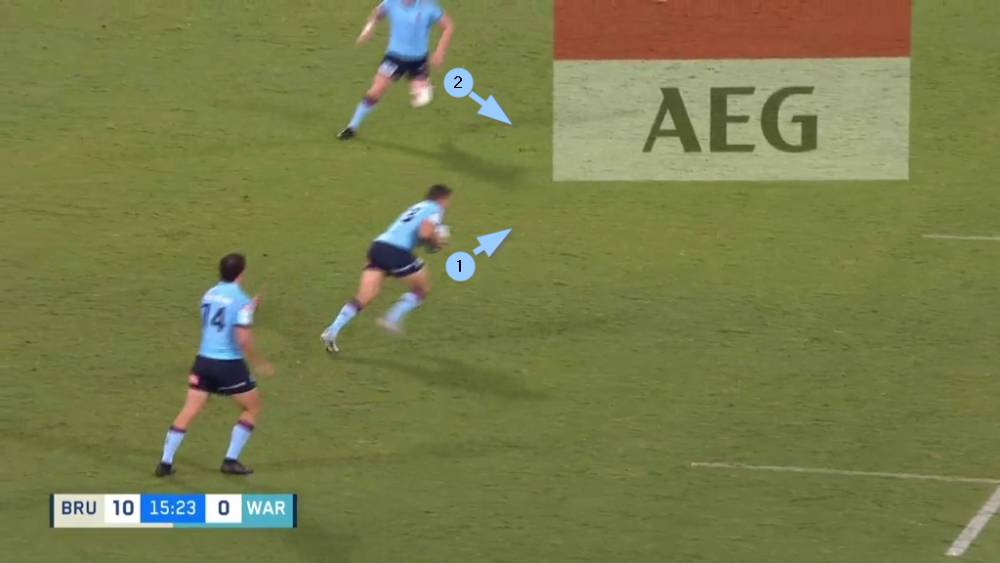 It’s a kick-out from the 22, and New South Wales have dropped the bulldozer Bell into their backfield alongside greyhounds like Izaia Perese. He churns straight through the first tackle of Darcy Swain to set up a prime midfield ruck on the return.

At shorter lineouts, Bell was not used as a lifter but set out in midfield as the main ball-carrier:

You might expect one of the two men designated to clean out over the top of Bell – number 8 Will Harris and number 7 Charlie Gamble – to be carrying the ball, but they are present strictly in a support role.

Queensland pushed the envelope even further in their contest against the Force, which brought the Australian list of matches to a close at the weekend. The Reds have established a statistical reputation for kicking the most and playing primarily off the counter, but against a possession-based team like the Force they set out their stall and went against type. They made 20 more carries, built 29 more rucks and gained 215 more metres overall than their opponents, and they looked all the better for it.

This had the effect of playing their open-side Fraser McReight into attack as surely as the preceding match versus New South Wales had played him into it on the other side of the ball. Among current Australian back-rowers, only Michael Hooper and Pete Samu can rival the vibrancy and intelligence of McReight’s play in the wide channels: 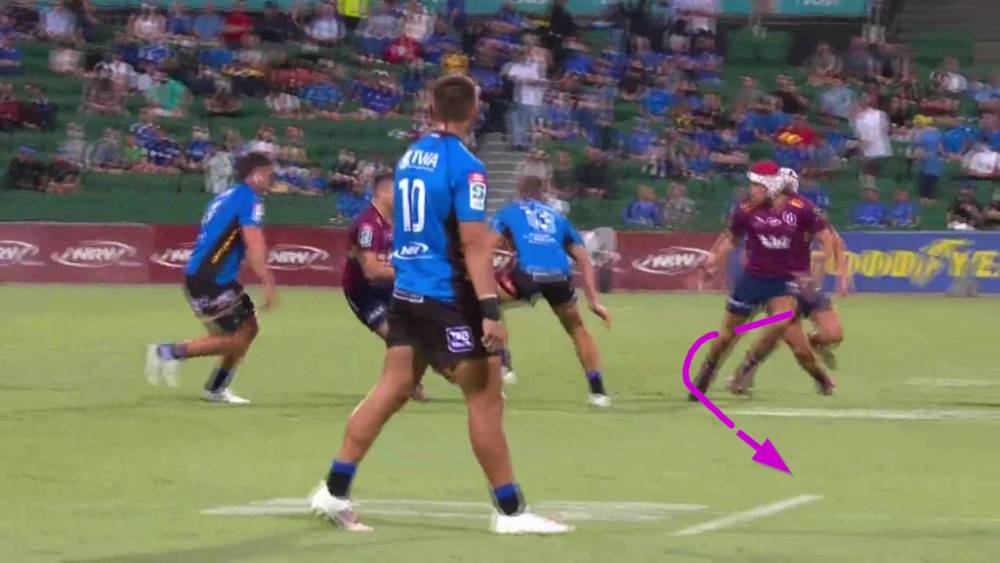 McReight cleverly bends his run in towards the key defender (Force number 13 Kyle Godwin), at least until Godwin turns to square up on James O’Connor. As soon as that happens, he takes one decisive step away and outside to penetrate the gap the Force man has exposed.

The ex-Junior Wallabies captain also provides the kind of link work which is beyond the capacity of club leader Liam Wright:

Number 8 Harry Wilson runs the inside hole, McReight links with Hamish Stewart and the rest of the Queensland backs out to the left. It opens up the width of the field and more space for big Harry to run at inside.

The added bonus is the synergy of McReight’s relationship with James O’Connor, in evidence for the final try of the game: 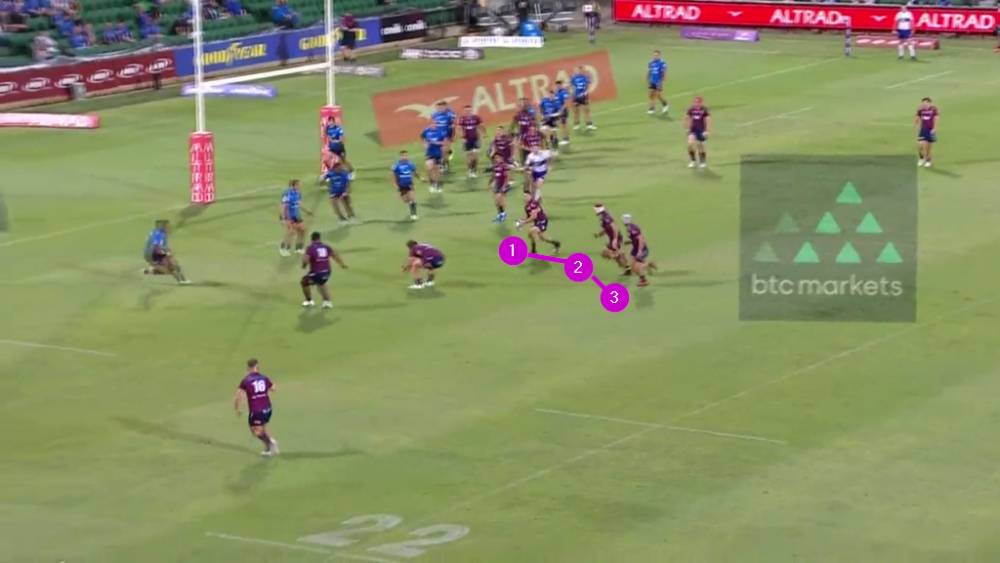 O’Connor takes the ball up to the line, McReight and Hamish Stewart swing late into the same-way field beyond him and overload the Force defence to that side. Simple and effective, but it was all founded on the Queensland coaches having the courage of their convictions – sticking with McReight and transforming the pattern of play to make the most of his strengths. They listened to what they didn’t want to hear, and hopefully they will reinforce that even when Liam Wright returns to action after injury.

There are real signs of innovation, and a willingness to face facts as they are in the coaching of Australia’s top four Super Rugby franchises.

Darren Coleman has brought much of that Maddening love of the dirty uniform, mud on the face and grass in the ear hole back to the Waratahs; and no little creativity in the role he is constructing for Angus Bell, who is currently one of the outstanding rugby players in the country.

The Brumbies know what they want from their players, regardless of the numbers on the back of their jerseys. They have developed Rob Valetini to the point where he is a force of nature and the most powerful, mobile ball-carrying back-row forward in Australia.

Now he is beginning to learn how to become a lineout receiver of worth too.

With Fraser McReight starting at number 7, so many more pieces of the puzzle fall into place for the Queensland Reds.

He provides a ready link to the backs, understands how to run off James O’Connor, and creates width which opens up larger holes for Harry Wilson to run into further infield. Whether John Madden ever watched a game of rugby or not, it is the kind of coaching he would appreciate, as much as the candy wrappers flying out of Nate Newton’s pockets as he trotted out on to the field.