Coach's Corner: Can all five Aussie Super Rugby teams fire at once?

Thanks once more to all who asked a question, or contributed to the debate afterwards at the call-out. Let’s waste no time and get underway with my Australian Team of the Week from round three:

This weekly exercise is proving to be a very interesting one. I have begun to notice the problem positions clearly, and that relates to the observant question:

It has been very difficult to find a hooker, left wing or full-back who is performing above the mean, and the trawl has had to be wider and deeper in those spots – although I have to say, without completely satisfactory results in any week of the competition thus far. Translate that into Wallaby terms, and it means that the likes of overseas exports Brandon Paenga-Amosa and Marika Koroibete have yet to be replaced, while the full-back hot-seat remains vacant.

In other areas it was far easier to make selections, and more a case of who to leave out.

For example, there were three high-performing midfield combinations (Brumbies, Waratahs and Reds) in round three, and a number of different selection options.

Olly commented that “the Reds backs are still not a well-oiled backline unit but a team of individuals like last year”, but the presence of Fraser McReight at number 7 and latterly, Hunter Paisami in the centres has undoubtedly helped the cohesion of Jim McKay’s attack and encouraged the Reds to hold on to the ball more.

Hunter Paisami had a very energetic first game back against the Force, with 10 runs for 37 metres, two tackle busts and over 75% lightning-quick ball produced on a majority of hard carries. The presence of Paisami and Jordan Petaia gives Queensland a solid power core in their back-line, on attack:

Those are the two Force second rows (Izack Rodda and Fergus Lee-Warner) Hunter is confronting in a very short area, and he is still making six or seven metres of YAC (yards after first contact).

On defence he was every bit as vigorous, on one occasion driving back Manasa Mataele in full flight:

Ten years ago, this would have been viewed as a perfect dominant hit on the biggest back on the field, but nowadays the legs of the ball-carrier may not be lifted deliberately above the horizontal, and he or she may not be ‘dumped’ head-first towards the ground without sanction.

So, the answer to RugbyRah’s question, it would be ‘a bit of both’. You want the physical approach and the big initial contact, but you also need to dilute the finish of the tackle so that the referee has nothing to review.

Lots of questions circling around the reasons why the Melbourne Rebels cannot get their act together so far in 2022:

Injuries have of course played a part, with the likes of Pone Fa’amausili, Trevor Hosea, Rob Leota, Josh Kemeny and Andrew Kellaway – all Wallaby squad players or better in 2021 – missing from the start of the Super Rugby season.

Injuries bring uncertainty about level of performance on their coat-tails, so it becomes important to return to the aspects of play where the starting units, and hence the level of cohesion remains largely untouched. The Rebels have had four or their five starters in the tight forwards (Cameron Orr, Jordan Uelese, Cabous Eloff and Matt Philip) available for most of the time, but their scrum has been close to a disaster area in at least two matches.

The warning signs on Eloff’s side of the set-piece against the Reds:

… were unexpectedly confirmed versus the Fijian Drua:

Cabous Eloff is seen as a live Wallaby contender for tight-head prop when he becomes eligible for selection (not least by me), but the outcome of these set-pieces is a real concern that he has yet to nail down a reliable technique that enables him to do his core job.

It is his problem to own, because it occurs against three different opponents – Dane Zander in the game versus the Reds, Kaliopasi Uluilakepa and Timoci Sauvoli against the Drua – in much the same form.

In all cases, Eloff releases the bind on his hooker and becomes disconnected from his support far too quickly. He gets popped out, turns in at a right angle, or pulls out of the contest entirely: 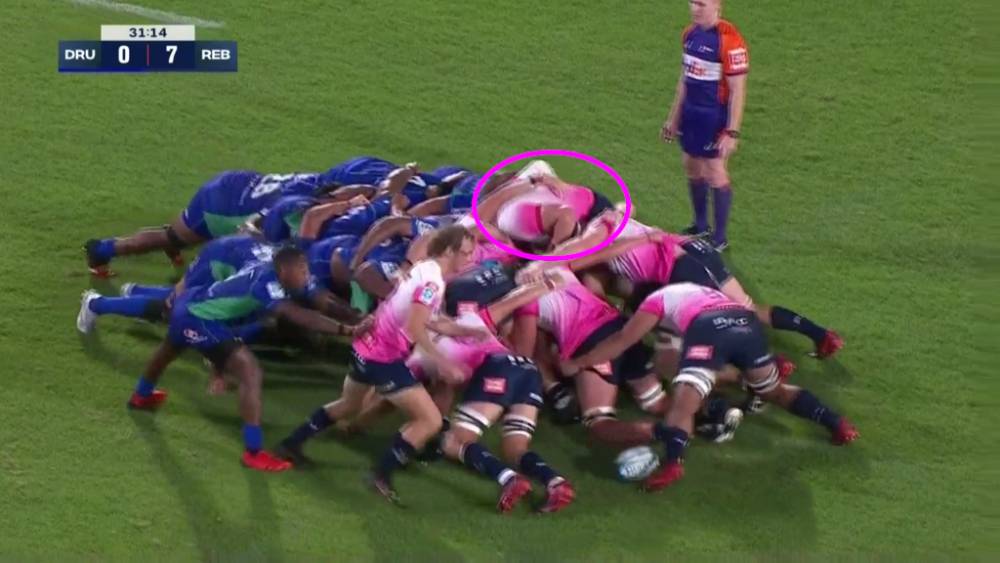 How Damon Murphy managed to find a penalty for the Rebels somewhere during that scrum remains one of the great refereeing mysteries of 2022!

Two of The Roar’s most perceptive scrum observers have noticed the improvements in the Drua set-piece over the first three rounds:

The worry for the Rebels is that they cannot depend on the elements of their starting side which should be rock-solid. Until this changes, there can be no overall improvement.

Some regular Kiwi site visitors were eager to hear about the much-heralded induction of ex-Leaguer Roger Tuivasa-Sheck to the Union ranks with the Blues:

Tuivasa-Sheck is seen by sections of the popular press in New Zealand as the saviour of New Zealand’s midfield with the World Cup approaching, and he has been started at number 12 by the Blues’ coaches.

There is no doubt about his skills with ball in hand. He has an electric first step and is the proud possessor of at least two types of offload:

The issues are on defence and in the learning of the skills in and around contact. The biggest contemporary boppers occupying the number 12 spot – Jonathan Danty, Bundee Aki and Samu Kerevi – are extremely physical and rugged, and at first sight RTS does not appear to be that kind of player at all.

There were some problems with tackle height on D in the game versus the Hurricanes:

RTS does not look to be the kind of defender who can take on the more powerful ball-carriers up high and hope to win the physical battle. Remember that the other Leaguer who played number 12 for the All Blacks (Sonny-Bill Williams) was a loose forward or second row in the other code, not a full-back like Tuivasa-Sheck.

Defensive technique can be adjusted relatively easily. It generally takes League players far longer to learn the correct reactions, and for them to become instinctive when the ball remains live and contestable after a tackle is made in Union:

In the first example, Sam Cane should by rights be Tuivasa-Sheck’s man at the cleanout. It is far easier for the outside man to make an effective removal in this scenario, but RTS leaves Cane to Dalton Papali’i coming off the side of the scrum.

In the second instance, there is a clear opportunity for RTS to advance on the ball and initiate a counter-ruck after Ardie Savea is taken behind the gain-line, but he still has that League play-the-ball instinct, dropping back into the defensive line on second phase instead.

It is not too hard to see Roger Tuivasa-Sheck ending up at 13 or in the back three, not at second five-eighth. It is likewise, difficult to disagree with Otago Man’s assessment that the quality of play in New Zealand is not quite as high as it has been in previous seasons. Would Luke Romano have started at second row for any of the franchises back then, looking about 10-15 kilos over his optimum playing weight? I doubt it.

Many thanks once again, to all those who contributed at the call-out stage!