The Roar
11th March, 2022
22
Join the conversation
Advertisement
Write for The Roar

Ben Simmons copped a hostile response from Philadelphia fans the moment he stepped onto the court for the first time since the controversial Australian was traded last month to Brooklyn.

Simmons, who is still yet to play this season, is not lining up for the Nets due to a back problem but took to the floor for the warm-ups amid heightened security at Philadelphia’s Wells Fargo Center.

The capacity crowd of 20,000 Sixers fans booed him but Simmons looked relaxed as he mingled with his teammates as they went through their pre-game routines. He was accompanied onto the court by his Nets teammate, Boomers veteran PattyMills.

They then started up a “F— Ben Simmons” chant in one of the most angry receptions any NBA player has received in returning to their former team.

He also got an ironic cheer from Sixers fans when he dunked the ball during the pre-game.

Simmons was criticised heavily during his time with the 76ers for not attacking the basket enough, culminating in an infamous moment in last year’s playoff exit when he passed to a teammate instead of dunking the ball.

In the end, Simmons had the last laugh with Brooklyn waxing the Sixers 129-100 to give their playoff hopes a vital boost.

Nets superstar Kevin Durant post-game said Simmons “already knew we had his back” before adding it felt good to quieten the 76ers fans: “We weren’t hearing any more Ben Simmons chants from Sixers fans.”

Extra security personnel separated from the court from fans with a yellow rope to ensure spectators were not able to enter the playing arena during the warm-ups.

Tickets for the game are at a premium – courtside seats have gone for $US4000 with upper bowl tickets in the nosebleed section selling for more than $200. 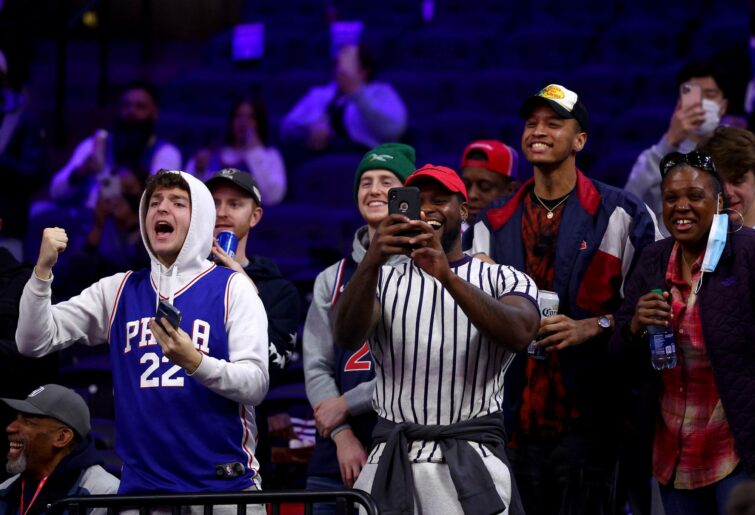 “It would have been a better night if Ben was playing. I give him credit for going out there, I wish he was playing,” NBA legend Shaquille O’Neal said on TNT.

“I’m glad he went out there for warm-ups and he’s sitting on the bench. If he didn’t it would have told me a lot about him.”

Nets coach Steve Nash was not bothered by the 76ers fans harassing Simmons.

“I hope he enjoys it,” Nets coach Steve Nash told reporters beforehand at the team’s game-day shootaround. “How many people get to go in an arena and get booed by the entire place? I had it done to me and I thought it was a privilege. So I hope he enjoys the experience,” he added in reference to his early days at Dallas.

“I think it is a part of the process, just kind of … getting that out of the way, going back, having everyone see you again and you see them. And from then on, everything dissipates game by game.”