England’s Aussie coach Eddie Jones, staring down the barrel of another Six Nations fifth-placed finish, is coming under increasing pressure 18 months out from the World Cup, with Clive Woodward stepping up the the attacks on Tuesday.

Writing in his Daily Mail column, Woodward had a crack at Jones’ pre-match talk before the loss to Ireland last weekend. Jones, meanwhile, says his job is made harder by being an Australian in charge of the old rivals, while also going on the front foot ahead of their final match against France this week.

England lost prop Charlie Ewels within 82 seconds against Ireland, a situation Woodward felt was whipped up by Jones’ “ridiculous rhetoric”.

“They were found wanting and that is the only way to look at this match,” Woodward, the 2003 RWC winning coach wrote.

“There is no Monday morning meeting and England are on the plane home, with Jones once again blaming a referee for his own shortcomings.

“Why? Firstly we had all this pathetic macho stuff from Jones in the build-up about how England were going to play with a physicality and aggression that Ireland hadn’t seen before. Why even go there? Of course it’s going to be tough and torrid up front, it’s England against Ireland at Twickenham for heaven’s sake.

“It’s a given. It’s that kind of ridiculous rhetoric that probably contributed to (Charlie) Ewels’ dangerous challenge, which was rightly punished with a red card. 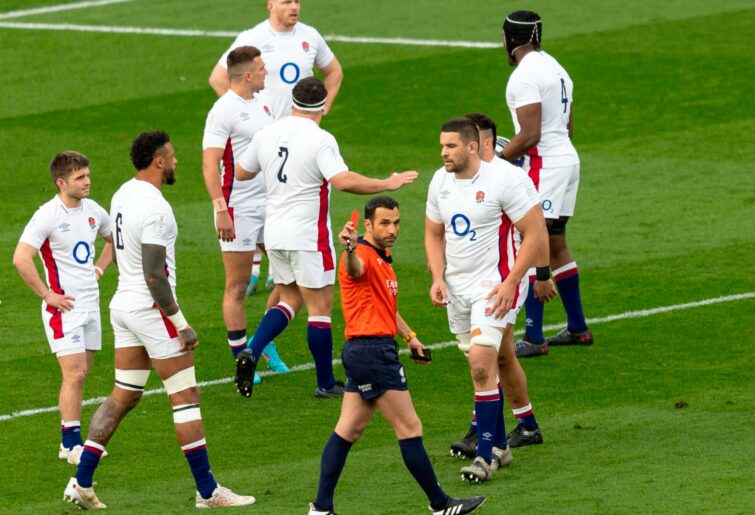 “Keeping 15 players on the pitch is the No.1 requirement in knockout rugby because being able to play under pressure is coachable.

“Part of that flawed approach was also fuelled by Jones’ insistence that England be viewed as the underdogs.

“Eddie is what is often referred to in Australia as an ‘Aussie battler’ — he prides himself as that underdog figure who seems to think the world is against him.”

Jones has tried to turn the mind games onto France this week, saying they will be struggling with the pressure of being one win away from their first Grand Slam in 12 years.

“We just want to play well, we want to take it to them,” Jones, the England head coach, said. “We beat them in our last two games, so we’ve got a pretty good track record against them.

Woodward suggested Jones’ approach was in ingrained, but not what was needed.

“I remember him from his playing days in Sydney, a small tough hooker with the Randwick club, who were perceived as the unfashionable team from a tough part of town, taking on my lot at Manly, who were seen as the city slickers and much more cosmopolitan, spending most of our time on the beach!” Woodward wrote.

“That streetfighter approach can only take you so far. It can work when you are clearly the minnows but England are not little guys who constantly need winding up.

“Now comes the challenge of playing Grand Slam-chasing France in Paris. In many ways it seems like a shot to nothing but there will also be pressure. A shock win could salvage England’s season but a defeat will probably see them finish fourth or even fifth.”

Jones, 62, told the BBC he knew what he was in for when he signed to take the team on after their near miss at the 2019 World Cup.

England finished fifth last year in the 6N and the same fate, depending on the results of theirs and other matches, could await this time, heaping pressure on him to hold his job.

“The longer you’re in the job, the more people probably don’t want you to be in the job,” he told BBC 5 Live. “I don’t think it helps being an Australian but that’s part of the deal. When I decided to do another cycle, I knew that would be more intense.”

“Most England fans would counter that Jones’s nationality matters less than his continuing ability to assemble a team that makes its most striking statements on the field,” wrote Robert Kitson in the Guardian.

“Having scored only two tries in three games against Scotland, Wales and Ireland, there are also those wondering if England’s idea of heading to Paris early this week to aid their acclimatisation for next year’s World Cup knockout phase is a shade presumptuous.”

Jones, however, feels he can find a way to unlock the French, whose defence coach Shaun Edwards is winning rave reviews.

“One thing I know is that there’s not a team in the world or in the history of the game that does not have a chink in their armour,” said Jones. “Every team has a chink. It is your ability to find and expose that chink which is going to be the key on Saturday.”