Every year quarterbacks are the coveted position players taken in the NFL draft.

We didn’t see many quarterbacks in the first round in mock drafts early in the season. People were saying that this class is not as good as those of previous years, that teams need other positions and that teams should not stretch and snatch a QB in the first round because it would be a mistake.

Fast-forward a couple of months, and who saw this coming? Multiple QBs are in the first round of mock drafts. It happens every year, and every year we’re surprised when we see it happen.

Do not be surprised if we see four or even five teams draft a potential franchise leader. 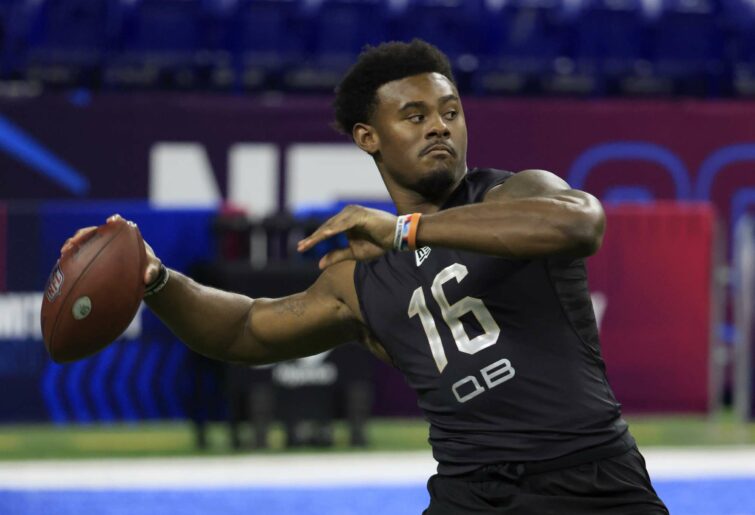 Out of this quarterback class, these are my top three guys I think will have the most success within the next five years.

If Sam Howell had been in the 2021 NFL draft, he would have been a top-ten pick. But he’s slipped on the big boards after a disappointing last season at UNC.

Howell saw every stat dip and interceptions go up compared to 2020, but that was not all on him. His offensive line did not perform, allowing 44 sacks in 2021 compared to 33 the year before. Sam was running for his life, thus creating some poor throws and irresponsible decisions.

But he did show off his arm at the combine and threw very well there. He also had a great Senior Bowl that showed scouts he has the talent and leadership to lead a franchise at the next level.

Howell slipping just a tiny bit will allow him to land somewhere that will help him succeed and be a great leader.

It’s probably a surprise here seeing Ridder in the top three. Selecting Ridder above names like Matt Corral and Carson Strong might appear strange, but he’s a winner. leading Cincinnati to back-to-back amazing seasons and leading his squad to the college football playoff in 2021.

Throwing 30 touchdowns and only eight interceptions, we all know he can throw it with the best, but his athletic ability is a sneaky quality, as his ability to run the football if needed.

He had over 2100 rushing yards in his college career and will have to use that ability in the NFL in order to be successful.

Like Howell, Ridder might slip to Day 2, which will allow him to land somewhere that will let him grow and maybe sit for a year and learn. But in the next five years do not be surprised to see Desmond Ridder in the NFL playoffs.

Malik Willis is becoming everyone’s favourite quarterback in this year’s class. He has a cannon for an arm, which gravitates people to him. He is raw and might need some time to grow, but Willis showed his ability to throw any ball needed, and accurately.

Willis could be good right out of the gate if a team needs a Day 1 starter, which is also a huge plus for him. He’s also a dual threat – he can hurt teams with his legs just as much as his deep throws. He’s creeping into the top ten in some mock drafts, and that might be where he goes. Malik Willis will not see past Pick 15, and rightfully so.

These three guys are all super successful and will help any NFL team that picks them up. They are all great leaders – they win games and have the talent to go far in their careers.

Watch out, because in five years when they are comfortable with their teams and are up to the speed of the game they will be the most successful quarterbacks from this year’s draft class.