There is a question and a conversation which has lasted almost as long as the professional era itself. What kind of player best suits the role of the modern fullback?

The choice has boiled down to a black-and-white contrast. Do you take the big man at the back, the rock sitting on a potentially error-strewn island, with hidden pitfalls to right and left? The guy who will catch every high ball, make every last-ditch tackle and offer strength on the return?

Or do you opt for the ball-player, the extra number 10 who can give more flexibility in attack and in the kicking game, but proportionately less assurance on defence? That debate has been resolving steadily in favour of the rock rather than the jack of all trades over the past couple of seasons.

The three best fullbacks in the world in 2021 were Freddie Steward of England, Jordie Barrett of New Zealand, and Ireland’s Hugo Keenan. Two of those stand over 6’5 in height and tip the scales at over 100 kilos and are immoveable under the high ball. Leinster’s Keenan may not be as big as the other two, but he is every bit as reliable. Even South Africa looked better when they replaced Willie le Roux with enormous Frans Steyn in the second half of the year.

The idea of fielding a second play-maker at number 15 has been going out of fashion as a hail of high bombs continues to blacken the sky of the professional game. None of the top ten teams in the world now selects a fullback who could genuinely be considered as a candidate for the number 10 jersey.

Stuart Hogg of Scotland and Australia’s own Reece Hodge come closest, but even they would laugh at the suggestion that they could be full-time outside-halves. Emergency duty? Yes. A permanent home? Definitely not.

It is quite conceivable the same choice could be facing Dave Rennie when he comes to pick his first Wallaby match-day squad of the year in July, for the visit of England. The cutting edge of the debate will be sharpened further if it is pitched as maroon red versus sky blue, Jordan Petaia versus Will Harrison.

Both made their first Super Rugby Pacific starts of the season in Round 4 over the weekend, and both did enough to suggest that the moves can catapult them into Wallaby contention before the international season begins.

Petaia was shifted from the right wing into fullback by the Queensland coaches for the match against the Fijian Drua, swapping roles with Jock Campbell. Campbell has his supporters as a number 15, none more vociferous than The Roar’s own Brett McKay. This is what Brett had to say on The Roar rugby podcast:

“There’s been so much talk about Jordan Petaia playing fullback, and that’s a silly idea for a number of different reasons.

“The prime reason is Jock Campbell is a better fullback. He’s shown it every week this season so far, his run metres, the work he does, the position on the field, he’s got a good kicking boot, his instincts are good, he’s got a bit of play making about him, he’s a good support player. I think he’s getting really good.”

I’ll have to respectfully disagree with Mr McKay on that one. Coaches like Dave Rennie, who think in international terms, will see Petaia’s value in the terms I described earlier. A big body at 6’3 and 100 kilos, who can potentially add value from the back on offence. As yet, Campbell doesn’t quite make the grade in either category, either as a second play-maker or as a defensive rock.

The shift brought Petaia closer to centre-field, and closer to the epicentre of the action against the Drua: he finished 1st in run metres (157), 1st in defenders beaten (5), 1st in successful offloads (3); 2nd in tackle breaks behind the excellent Hunter Paisami (5), and with more ruck attendances than any other Reds’ back (14) bar the tireless Hamish Stewart.

The Queensland prodigy announced his presence with a spectacular early try from a lineout:

One important part of the reason for the success of an attacking move from this source is convincing the D that all of your outside backs offer a genuine threat in the wide channels. The Reds presented with blind-side wing Josh Flook, centre Paisami and Petaia in their key attacking triangle: 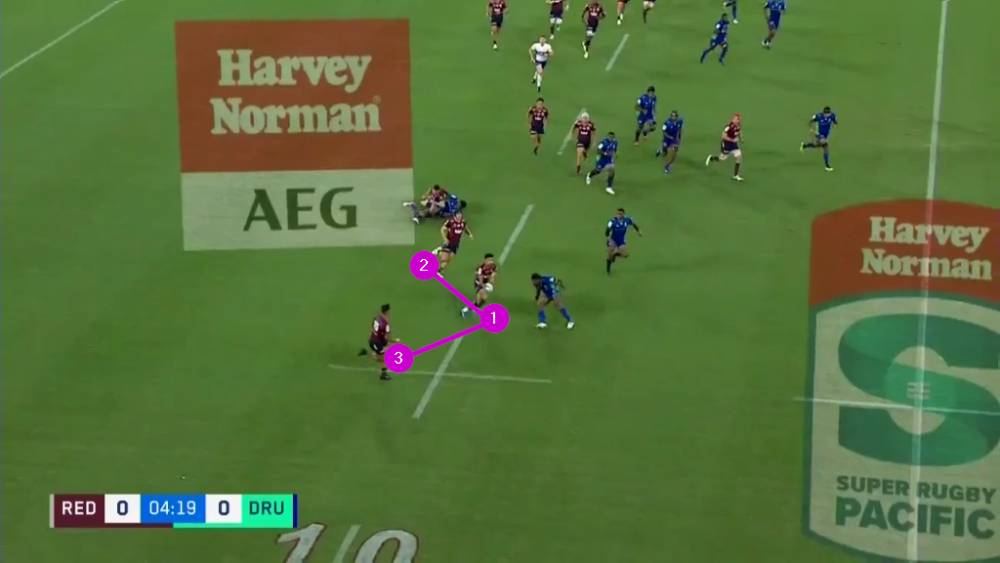 Now, just imagine Marika Koroibete, either Paisami or Len Ikitau, and Petaia in the same roles for the Wallabies. That is some set-up. Here are the same three players combining from a turnover return, but with Petaia feeding rather than breaking on the outside:

The backfield worked equally well from kicks, with defence transitioning into attack on Campbell’s side: 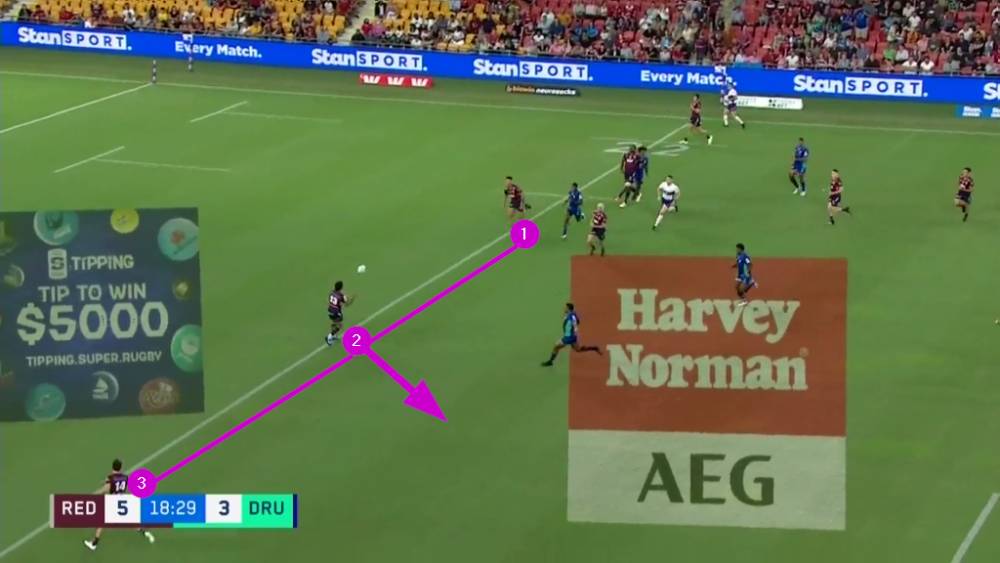 Petaia lofts the ball into midfield, knowing that Paisami and Campbell will be able to regroup and link on the counter. The sense of connectivity is as tight as knicker elastic.

What will also enthuse Dave Rennie is Jordan Petaia’s rock-like presence as the last line of defence:

Stocky Fijian wingmen like Raupeni Caucaunibuca and Josua Tuisova are notoriously difficult to take down one-on-one, even when you have the right angle on them, but Petaia deposits Onisi Ratave over the side-line in no uncertain terms. If he can prove himself under the high ball too, Dave Rennie may just be on to a winner.

Petaia and Campbell also worked smoothly in combination, not least from kick-offs:

Jock drifts the ball just beyond the Drua 40m line, Jordie knocks it back on the Queensland side, then Campbell reappears at second receiver as the ball is moved back across the width of the field. The long-hand version of this sequence occurred in the second period:

Jock lofts, Jordie tips, and both mix and match straight up the middle on the following play.

If you get the feeling that Petaia’s presence at fullback is pushing Campbell further infield, and towards a play-making role, you would be right:

It didn’t always work out so smoothly, of course. When Jock moved into the number 10 role proper for the final 15 minutes, it resulted in a fumble and a one of the Drua’s three comeback tries right at the death [see 5:23 on the reel].

The intrigue only deepened with the selection of a true number 10, Will Harrison, at fullback for the Waratahs in their game against the Force at the Leichhardt Oval. The first half in particular showcased the positives of the dual play-maker system, especially when one of the pair is naturally left-sided like Harrison:

Easy width becomes available to the attack when a naturally left-handed passer can be inserted at first receiver, and ahead of the right-side distributor Ben Donaldson.

“Harrison has been a lot more prominent in the physical exchanges than I would have thought going into fullback.

“It’s always good fun for a fly-half going into fullback because you get to see everything going on in front of you without the responsibility you normally have to try and drive everyone around you. He can pick his moments come up, take the heat off Ben Donaldson and make it count and he’s picking his moments really well today.”

The presence of an extra first receiver always helps the attack in a split field, with the added bonus of opening up the width of the pitch on exits:

As ‘Mehrts’ observed, despite his small stature Will Harrison enjoys contact situations, and had enough sufficiently rock-like moments to encourage the repetition of the experiment. He even scored a try, and that was the cherry on top of the sky-blue cake:

Round 4 of Super Rugby Pacific will re-ignite the great fullback debate in Australia, and it will do so along the lines of the greatest interstate fault-line in the country. Should the Wallabies look for a rock, or for an extra playmaker at the number 15 spot?

There are so many subsidiary questions clamouring at the door. Is Jock Campbell better at fullback or on the wing? Can Jordan Petaia manage the nuances of the switch in time for the 2023 World Cup? Is Will Harrison good enough to provide a genuine play-making choice from the back?

With neither of the 2021 incumbents (Tom Banks and Reece Hodge) establishing an automatic claim to the position, those questions have become more urgent, and Wallaby head honcho Dave Rennie will be watching developments over the next four months with keen interest.

It can get lonely out on the fullback’s island, and he needs to know he’s really wanted, and supported by everyone around him – by players, coaches and supporters of the game alike.