What do we gain by going to the game?

The deficit is palpable. It costs. A Round 4 ticket to sold-out Twickenham with England still in the Six Nations hunt? A lot.

It takes time. Twickers is not really in London. It has no tube station. It’s in the Heathrow flight path. There are no real pubs.

After the match, a visitor shuffles a mile in a throng sure to include thousands of discontented until herded into a chute to take the 40-minute train to Waterloo station, desperate to hear the last ‘Sweet Caroline’ or ‘Tell Me More’ rendition of the night. 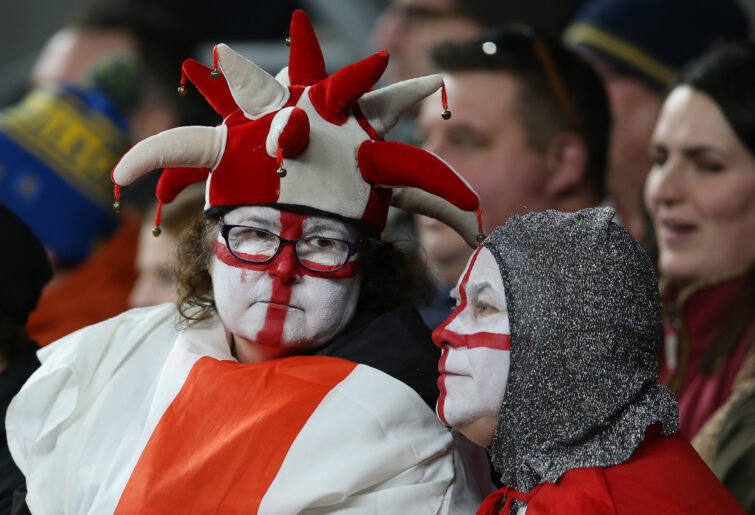 You are committed. If a red card is whipped out after 82 seconds, you cannot turn off the telly and start doing your DIY tasks. You sit, chagrined, hoping the 14-man team can make a game of it. You are the Vegas fan who came around the world to see a first-round KO. You are the punchline.

Also, Twickenham seats are not made for forwards. Sitting down requires scrum engagement protocol, and a strong bind. An item dropped is lost forever. If the man in front of you leans back in his bending chair, your aching knee will say hello. Halfbacks designed this special torture.

If anyone departs the row, the only way to avoid an awkward lap dance grind is to step to the aisle, as well. Happens quite a bit.

Rugby is renowned for a lack of statistics. But here is one certainty: the average time spent by Twickenham season ticket holders away from their seats (to get four beers, to expel said beers, to stand in line for either activity) equals the average ball-in-play average, and given the impossibility of matching excursion with ball-in-play, the median English fan’s in-person watching time is nine minutes.

Which means these barristers pay 20 quid a minute to be confused, bloated, and far from their Soho flat or house in Surrey.

Being at the Test match means you cannot hear a French referee murmur his thoughts about angles and harm. In each section, one or two investment bankers have supernatural 5G connection and inform the general vicinity what Twitter has pronounced.

“Hands in the ruck, they say. Bloody French frog reffing next week, today.”

In person, you are subjected to relentless ref-bashing. The Irish boy to your left, dressed like he is in Top Gun, complete with unnecessary aviators and a leather flight jacket, is screaming for another red card. The lads behind him are tracking how bent the same referee is, and start to call the Irishman ‘Maverick’ and order him to sit down. He squats in the aisle, spreading his cheeks.

Perceived injustice. Righteous victims all. And freedom to spew bile.

Live, you miss perspective. Every Garryowen looks like a bomb. Breaks seem wide, until they aren’t. One clean break by England in the whole game, created by an absurdly forward pass; and afterwards, when I looked at the stats one lacks in the match, I was actually surprised England ran for 214 meters (Ireland: 555).

Speaking of stats: live, all you can do is guess.

I was pretty accurate about the Irish-dominant ratio of passes (192 versus 69) and offloads (11 to four) but given the volume of ref-bashing around me, I did not get the penalty count right. It turned out it was a 15-8 ratio, which is rather extraordinary.

Turnovers (17) and penalties kept England alive till ten minutes left. But in the stadium it was all about the clock and the kicks.

If Marcus Smith kept making the goals and time kept ticking, the English portion of the stadium believed. But the dam broke.

Being there forces delayed gratification: the foul trough at halftime, the pasties from Cornwall or elsewhere, the Guinness and Becks after an eternal queue, and the staggered departure.

But being there gives you more than it takes.

The sound of the moan of tens of thousands for a tiny mistake. The swell of the roar as a chance comes at last: Freddie Steward with the intercept that wasn’t. The wry laughter as Joe Marler banters with the bobbies. The smell of those pasties in your pocket and the way they pair with the dark glass of goodness.

The beckoning sky heralding a match to be. The sight of the old warrior, Johnny Sexton, calmly taking five-degree shots at the poles before his last Twickenham rodeo. The impossible sheen of the pitch. The sight of Courtney Lawes and Maro Itoje both tackling the same man at the same time and feeling that crunch.

The quicker sight of a kick being a spiral. The truth of how narrow the gaps are for Jamison Gibson-Parks to slither through. The giddy height of the poles as the sun falls. The kindness of strangers who turn with a smile and a shared observation.

I will always make the pilgrimage. It is worth it to see and hear it and even smell the contest. Gain line and tackle power is sensed. Momentum adheres and adjusts. That television commentator cannot infect your view, and soon, the cacophony of the near crowd blends into a blurred brew of atmosphere.

Maverick bought beers for the lads behind him in the end. Hands were shook: elbow patches and bomber jackets, chinos and jeans.

Two hours or so in a citadel of rugby, where cabbages once grew.

You can always watch the replay if you want, but you cannot televise the feeling of being there, in the flesh, paying the price, and rolling the dice.