Coach's Corner: Is time up for Eddie Jones at England?

Many thanks to all those who contributed a question at call-out time, or helped develop one in the course of the forum afterwards!

First to the ‘team of the week’. I’ve changed things up a bit: from now on I will name a starting XV. If there have been no outstanding performances in a specific position, I will default to choices from previous weeks.

Lots of interest this week in the England-Ireland game from the Six Nations, and particularly in Eddie Jones’ attempts to justify England’s current standing after the game.

There were plenty of questions about the scrum refereed by French official Matthieu Raynal. 11 scrums put down in total, with seven ending in penalties, two resets, one free-kick and only usable ball. The one completion was Ireland’s, and it was their only feed of the game!

An 11% completion rate represents a new low for the scrum in international rugby, and brings into question whether the set-piece is viable in a game which wants to increase its audience in a jostling broadcasting market.

Queries about the activities of the English loose-head Ellis Genge, directly opposite Tadhg Furlong in the Ireland front row, abounded:

Let’s deal with the dynamics of the scrummaging on the England feed first. The majority of the penalties were given against the Irish front row for illegal wheeling:

Those are two different scrums from three different angles, all of which reveal significant aspects of the set-piece dynamic. As ever, the premium view is from ‘the eagle’s eye’ overhead cam. If we isolate the key moment at set-up, the situation looks like this: 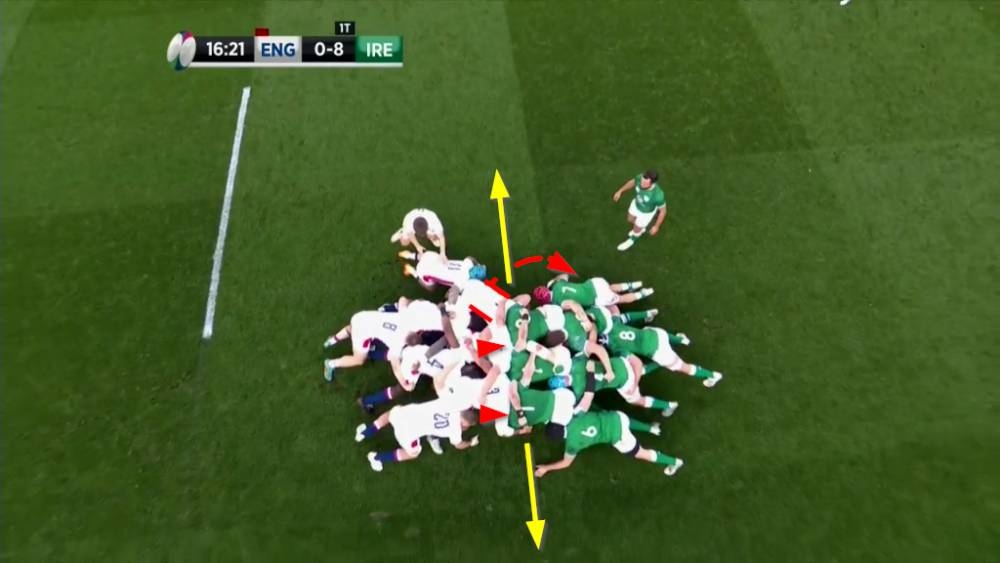 Five of the six front rowers are pushing more or less straight ahead at the moment Harry Randall feeds the ball. The only exception is Ellis Genge on the England loose-head, who is packing at an acute angle into Furlong. That creates a hole behind him: if the left-side second row (Courtney Lawes) applies weight, it will push Genge further out to the left, into the space beyond Furlong’s right shoulder.

The effect is accented by the packing angles of numbers 4 (Maro Itoje), 8 (Sam Simmonds) and 11 (Jack Nowell). Their feet are all moving left, and their torsos are angled to the right.

These bio-mechanics mean that the scrum cannot move straight ahead, it will spin around the England loose-head side: 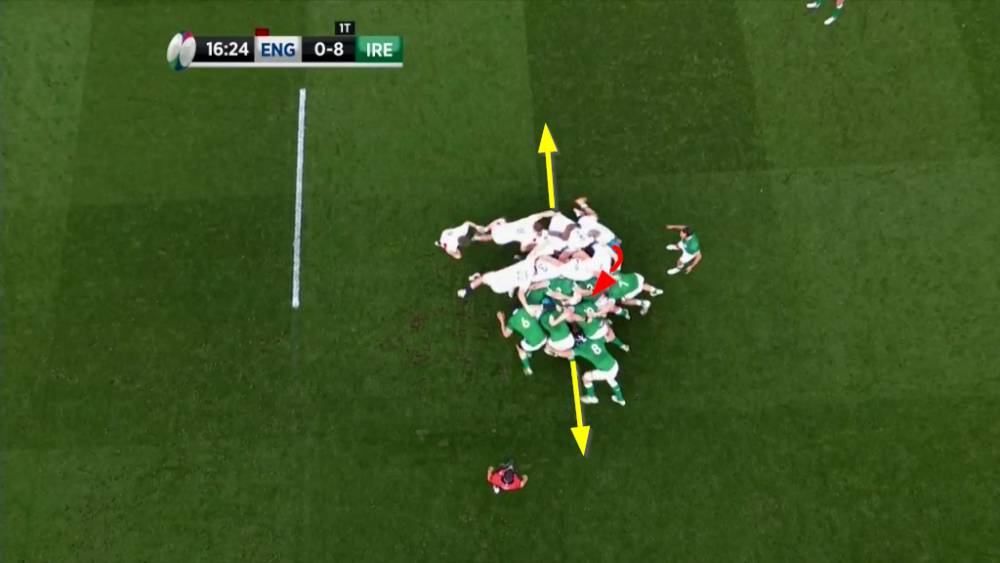 The mid-line of the scrum is much the same, and the extent of England’s advance is less than half a metre. Unlike Genge, Furlong is still trying to direct his power upfield at the finish.

Does this kind of activity warrant a penalty against the men in green? As the third of the clips illustrates, Ellis Genge is crabbing around Tadhg Furlong, not pushing straight ahead. And at the end of the scrum, it is England who have disintegrated – not Ireland, whose forwards are all still on their feet.

The debate was sharpened further by the comments of Eddie Jones after the event:

“I’m a bit disappointed the referee didn’t allow us to scrum fully. That would be my only complaint.

“We weren’t allowed to play advantage away from the scrum. We got four scrum penalties and there was no sign of a yellow card.

“We want to have a powerful scrum and if World Rugby want to have the scrum in the game, they have got to allow the strong scrums to dominate. We’re disappointed we didn’t get more out of that.”

In fact, there is never any intention to ‘play advantage away from the scrum’. At the end of every one of the penalties, England scrum-half Randall was pleading for the penalty with open arms, not looking to play the ball, and indeed control at the base had become an impossibility for his number 8 by that stage.

What needs to be erased from the game is not ‘scrum dominance’ but how it is applied – with an intention to play the ball, not to force decisions out of the referee. The scrum has to rediscover its identity: as a start-point for constructive, not smart, but ultimately cynical play.

Heroes of The Roar Mzilikazi and Harry Jones also pointed fingers at the wider smokescreen Eddie Jones was busily creating:

Harry Jones was referring to this ‘poetry’ by Eddie Jones:

“I think we’ve taken massive steps forward. We dominated the game against Scotland, we got beaten. We’ve dominated this game with 14 men, at times, and got beaten. And then we’ve had two good wins against Wales and Italy and we’ll have a good win against France. So, I can’t see how we haven’t progressed the way we want to progress.’”

These are the underlying questions. Against their three Celtic opponents so far (Scotland, Wales and Ireland), England have scored one scrappy try from a broken Welsh lineout, and another from a piece of opportunism by Marcus Smith against the Scots, in 240 minutes of rugby.

At the same time, they have shipped nine tries by their opponents, and two of those three games have been on their own patch. ‘Massive steps’ seems like a massive overstatement, and if England lose heavily in Paris this weekend it could be a watershed moment for Eddie Jones as England coach. Two successive losing seasons in the Six Nations will not sit well with the suits at ‘HQ’.

The second major focal point for questions was the breakdown, embracing comparisons between New Zealand and Australia in Super Rugby Pacific, and the two hemispheres more generally.

….recently highlighted differences in approach, which were discussed by ex-All Black Jeff Wilson and current referee Ben O’Keefe and picked up by a number of Roarers on the forum:

Jeff Wilson suggested that cleanouts in the Northern Hemisphere were both more aggressive (with players ‘punching through’ rather than ‘squashing down’) and more correct, with players staying on their feet rather than going to ground.

Ben O’Keefe added a key officiating emphasis to the debate:

“The game [in New Zealand] is slow, we are not getting that quick ball we’ve had over the last few years.

“Six Nations, when I reffed it last year, it was slow, this year it is fast. I think it is no surprise that we saw Ireland and France play like they did in November.

“It’s our responsibility as referees to get that player rolling out, the players are trusting the referee that they will get that role, the clean is coming in high and getting quick ball out.

“There is that balance that the referee has got to do their job too, to get a fast game.”

With between 150-200 rucks in every game, it is hard to argue anecdotally from the very beginning, so let’s set the scene with some revealing stats:

First, the differences between New Zealand and Australia in the early stages of Super Rugby Pacific are still clearly marked. New Zealand sides are capable of building 13 more rucks per game at the same rate of retention, while delivering quicker ball than their counterparts from across the Tasman. It suggests that there is still a gap in overall game speed between the two ‘Conferences’.

The comparison between New Zealand and the Northern Hemisphere is more complex. The number of rucks set is identical, but there is probably a stronger sense of contest in the north. For instance, after three rounds, nine different French players have won turnover on the deck in the Six Nations.

The gold standard for ball retention at the ruck remains Ireland, who build 20 more rucks than the mean at the same retention rate, while producing the quickest ball in the competition. It was probably not a coincidence that the strongest set of examples produced by Jeff Wilson came from Ireland matches: 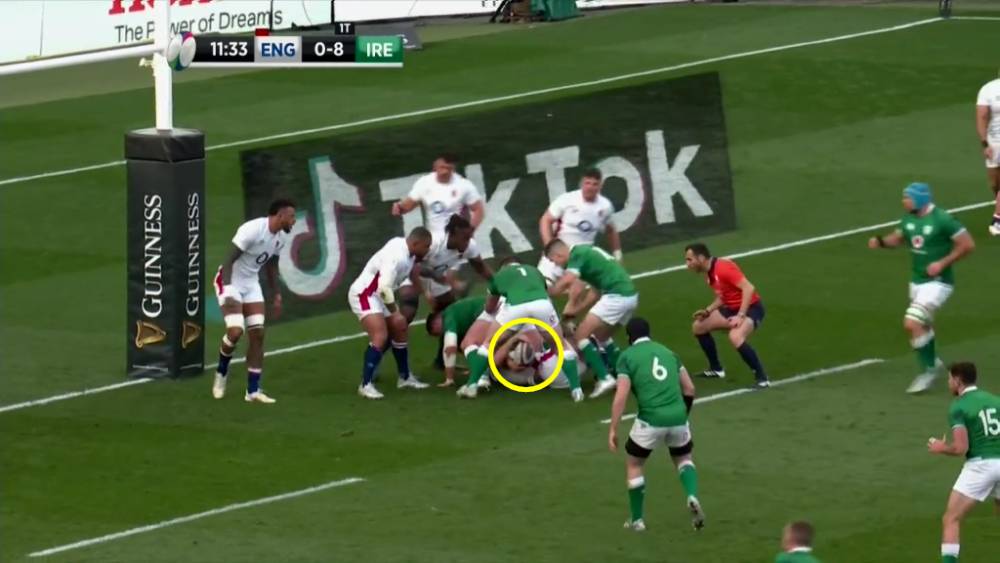 It is footwork at the line (by hooker Dan Sheehan) and the sleight of hand in the tip-on pass (from Tadhg Beirne) which creates a positive cleanout situation on Tom Curry, although there is no attempt to stay on feet in the process. Then Tadhg Furlong squashes down on the tackler to win penalty, an insurance policy just in case the next attack fails. The third cleanout is smartly angled by Iain Henderson on Courtney Lawes to open the field for the ‘scoring’ play – though once again Henderson leaves his feet to finish off.

Smartly-angled cleanouts are a feature of Ireland’s play: 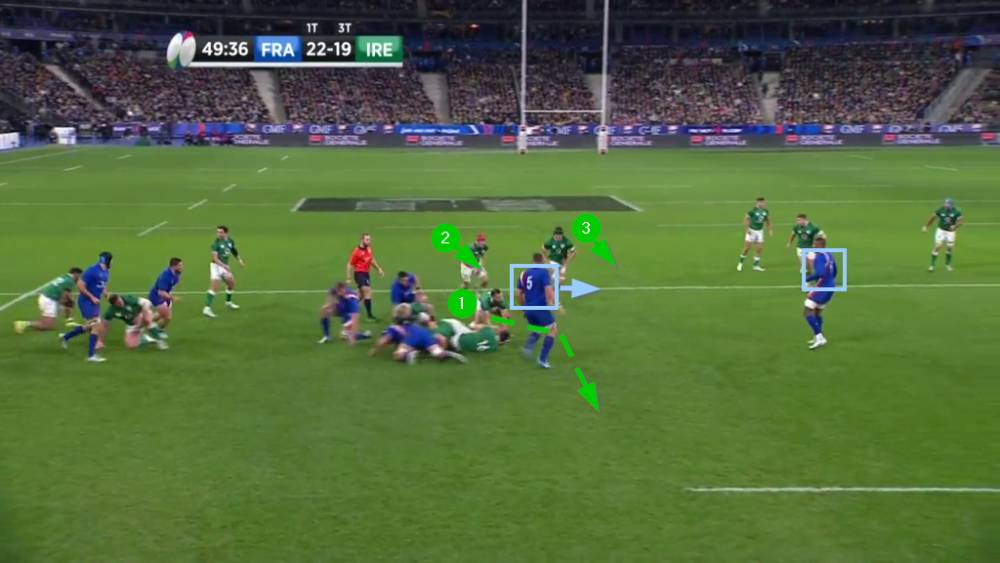 It is Sheehan’s footwork and Andrew Porter’s cleanout in combination, which create the space for the scoring break by Jamison Gibson-Park.

There are some signs that the refereeing in New Zealand is moving closer to the Northern Hemisphere, by insisting that the defender follows a harder set of rules before he/she can be rewarded for their efforts. Look at this sequence from the end of the Crusaders-Chiefs game:

Braydon Ennor appears to get a lift at the first ruck, and Sevu Reece is on-ball at the second, but because the tackler is interfering with the cleanout in both instances, there is no reward for the defence. That last penalty decided the fate of the match: 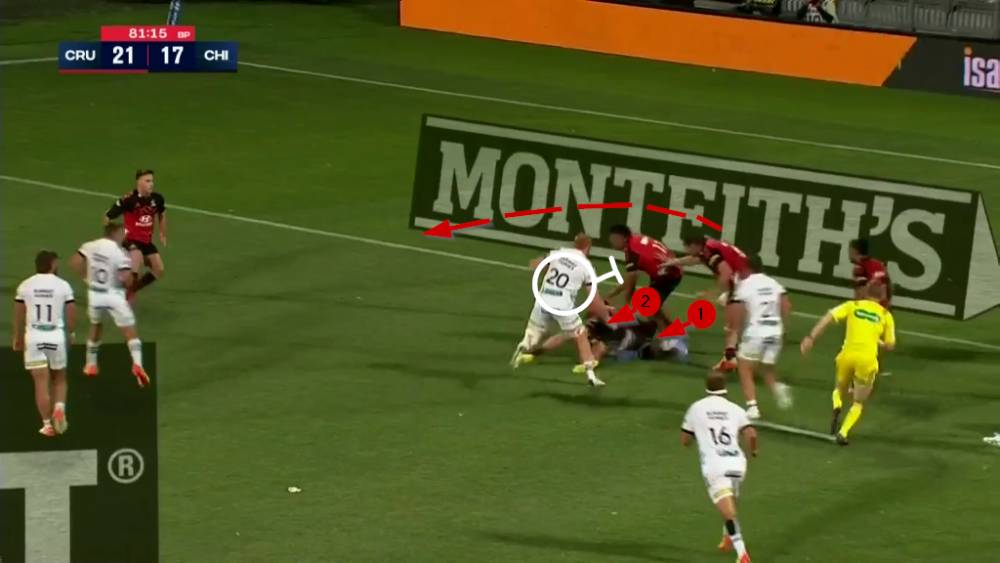 The Crusaders double-dip at the breakdown once too often, and get burned by the angled cleanout and resulting space on the wide outside.

Thanks once more to all who got involved!