Australia are through to the Women’s World Cup semi-finals, squeaking past India’s 7-277 after a rain delay injected drama to their chase in Auckland.

Beth Mooney produced last over heroics and Meg Lanning led from the front, scoring a superb 97 to give Australia a rare win at the All Blacks’ house of pain, Eden Park.

Australia looked to have the task in hand before showers arrived, pausing their innings at 2-225 and needing 53 runs from 54 balls.

With Lanning gone eight runs from victory, Mooney steadied the ship and saw out a last over when Australia needed eight to win.

The victory is Australia’s fifth straight in New Zealand, where they are looking to recapture the trophy lost five years ago in England.

Lanning won the toss and opted to bowl in Auckland, hoping to take advantage of the bouncy wicket.

India relied on a 130-run stand between Mithali Raj (68) and Yastika Bhatia (59) to build their innings, before Harmanpreet Kaur took flight late.

The trio all tallied half-centuries, with Australia helping them out through a scattergun attack.

Ellyse Perry was the worst offender as Australia gave away 24 runs from wides, their worst return of any World Cup innings.

Handed the ball in the 12th over, Perry got her line all wrong, bowling six individual wides – including one that went to the ropes – to the delight of the partisan crowd.

Fans screamed ‘wide’ with every run-up and release as Perry went for 16 and returned to the field.

Kaur (57 off 47) and Pooja Vastrakar (34 off 28) launched late but the score looked to be unders on the short and square ground.

In reply, Alyssa Healy and Rachael Haynes fired from the get-go with 67 off the powerplay and a 121-run opening stand.

When both fell an over apart, Lanning and Perry put together their own century partnership, Perry falling for 28 just after rain arrived to set up the nerve-wracking finish. 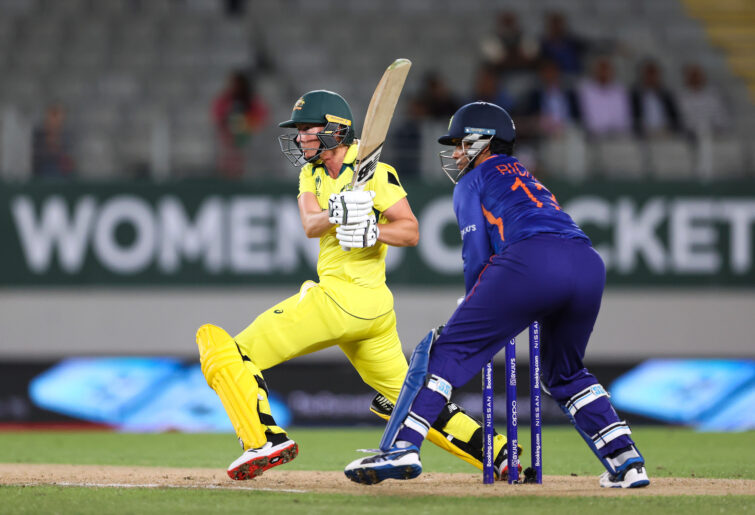 Pace legend Jhulan Goswami heightened the tension with five dot balls in the 48th over, and steamed in for the last over.

Mooney settled the matter and Australian nerves with two fours in the opening three balls, the last over Goswami’s head, who despaired.

Defeating India should hold special resonance for Australia, as the only team to beat them in the last 35 ODIs and the side that sent them home from the 2017 World Cup.

The loss continues India’s boom-bust tournament and leaves them in a dogfight to make the final four.

With Australia (5-0) through and South Africa (4-0) in the box seat to follow, there are spaces for just two more teams.

The West Indies (3-2) hold their destiny in their own hands, while holders England (1-3), India (2-3) and hosts New Zealand (2-3) also still harbour hopes of qualifying for the semis.

England and New Zealand round out a marquee weekend at Eden Park on Sunday in a match that will virtually end the semi-final dreams of the loser.

Australia can round out the group stage without pressure against South Africa (Tuesday) and Bangladesh (Friday) in Wellington.