It’s our biggest World Cup qualifier since the playoff win over Honduras four years ago, with the Socceroos needing to beat Japan to have any hope of qualifying directly for Qatar.

That record-breaking 11-game winning streak feels like a lifetime ago. After a rocky third qualifying round that has seen a surge of late goals do untold damage to Australia’s chances, Graham Arnold’s men are hanging on a knife edge.

With group leaders Saudi Arabia on 19 points and second-placed Japan on 18, an Australian side currently on 15 points simply must beat the Samurai Blue in Homebush to have any chance of qualifying for the 2022 World Cup directly.

There’s little chance the Saudis lose to China in Sharjah this week, meaning Australia must beat Japan at the recently rebranded Accor Stadium to stay in with a chance of finishing in the top two and avoiding another intercontinental playoff. And unlike previous campaigns, when the Socceroos beat Uruguay and Honduras in front of capacity crowds in Homebush, FIFA have decreed these intercontinental playoffs will be played as single one-off ties in Qatar as part of the governing body’s insatiable quest to ruin every single enjoyable element of the world game.

So we know what needs to be done. The question is: can the Socceroos do it?

The cynical response is to suggest that they can’t. Results haven’t been great, and that’s before we even start talking about performances.

And then there’s the fact that Craig Goodwin and Jackson Irvine have joined Aaron Mooy on the sidelines due to COVID-19.

Will they be joined in their absence by Graham Arnold? The Socceroos coach has tested positive to the virus for the second time and unless he posts a negative test on Thursday, he too will miss the match.

Those are the downsides. But surely there are some silver linings amid all the negatives?

Mooy and Irvine’s absence could open the door for Toulouse midfielder Denis Genreau – a player who started all three of the Olyroos’ fixtures at the Tokyo Olympics, but who has barely got a look-in for the Socceroos.

Jimmy Jeggo won’t be overawed by the occasion should he get a starting berth, while Arnie will be sweating on the fitness of Tommy Rogic after he was on the receiving end of a crunching tackle in Celtic’s most recent win over Ross County.

But the biggest inclusion is a name no one thought was ever in contention for the Socceroos.

Let’s get straight to the point – Bruno Fornaroli might be Arnie’s biggest roll of the dice, but it’s a gamble he’d be crazy not to take. 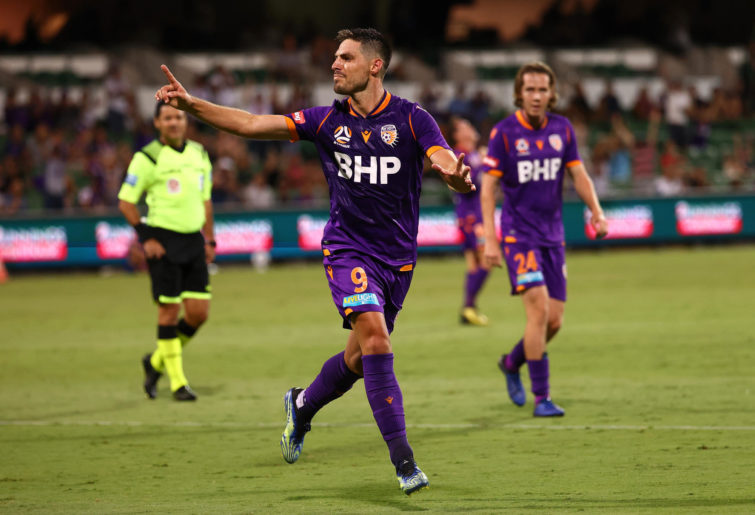 We’re all familiar with the complaints. Fornaroli is too old, too Uruguayan, too much of a reminder that the pathways in Australian football are undeniably broken.

But he’s also a born winner. Having received a shock call-up just days after earning his Australian citizenship, no one will give more to the cause than the Perth Glory striker.

Fornaroli will come off the bench against Japan, but with Jamie Maclaren set to miss the trip to Jeddah for his wedding, his inclusion makes sense in a squad that has otherwise run out of options.

And with big names Hiroki Sakai and Yuya Osako both missing for the Samurai Blue, it’s not like the Japanese don’t have their concerns either.

Around 40,000 fans are expected to file into Accor Stadium for Thursday night’s clash – a decent enough figure given the spectre of COVID that still lingers over the harbour city, but a far cry from the capacity crowds that have turned out at World Cup qualifiers in the past.

Those in attendance will have a job to do.

There was a suggestion on Twitter last week that Australia will never be a football country. Just like Japan, maybe we don’t need to be.

But we do need six points. And if we’re ever to have any hopes of becoming a football nation, the next two weeks will go a long way towards building them.