With the battle for the 2022 Supercars championship on after the season opening Sydney SuperNight, reigning champion Shane van Gisbergen sought to stake a claim on his title defence at a known Red Bull fortress.

Retaking the series lead thanks to some contentious, but hard racing highlighted the Tasmania SuperSprint for van Gisbergen, while his rookie teammate shared in the spoils amongst other pains at Symmons Plains.

The reigning Supercars champion continued to cement his reputation of being a hard racer, having charged from fifth on the grid to a 56th career win – equalling Garth Tander and Scott McLaughlin.

Van Gisbergen found himself in the top three by Lap 6, passing Brodie Kostecki who again had an excellent qualifying, before setting after two-time Bathurst 1000 winner in Will Davison.

The Shell V-Power Mustang put up little resistance on Lap 10 down the straight, after Van Gisbergen bumped him upon the exit of the hairpin to set up the contentious pass. A similar story on Lap 16 when polesitter Cameron Waters was touched up at Turn 4, before the Kiwi completed the pass into Turn 6.

It would have been much to the ire of Waters, who immediately gesticulated at van Gisbergen. However the Tickford driver post-race lamented that drivers would have to get into a position to return serve on the two-time Supercars champion, instead of letting him continue to intimidate.

Fair game in that instance, though it would be great to see the other drivers indeed return serve on the hardened Kiwi. Ultimately, if someone other than van Gisbergen were to win the championship – it won’t happen by tickling the 32-year old out of the lead.

Following the Waters pass for the lead, Davison was brought in for his mandatory pit-stop and the Monster Energy Mustang followed suit on the next lap. Van Gisbergen reacted to both stops and kept the effective race lead once the field settled.

Three seconds was the margin at the end of the 44-lap sprint between van Gisbergen and Davison, who himself gained the enviable record of equalling the career podium tally of his team owner in Dick Johnson. The Ford legend having notched up 65 trips to the podium in what was an illustrious career.

Life atop the championship standings was sadly short lived for Chaz Mostert, after the highs of victory in Race 2 at Sydney Motorsport Park crashed down to some unfortunate lows on the opening day of the Tasmania SuperSprint.

An apparent power-steering problem plagued the Mobil 1 Optus Commodore during qualifying, resulting in a Q2 elimination and a lowly 13th on the grid for the two-time Bathurst 1000 winner.

All was going well in the 44-lap race, with Mostert able to battle for eighth and a crucial top ten finish – until Lap 37 when an incident between his former teammates in Mark Winterbottom and David Reynolds saw the Walkinshaw car as collateral damage.

Coming out of the Turn 4 hairpin, Winterbottom turned around Reynolds while Mostert had nowhere to go amongst that and hit the rear of the Irwin Tools Commodore. An apologetic Winterbottom was penalised 15-seconds for the hit on Reynolds, though it was the 29-year old who came off worse.

Significant front-end damage saw Mostert drop three laps off the lead, but ultimately ended the race as a classified finisher to earn some consolation points.

It was only a matter of time before sensational rookie Broc Feeney would notch up a maiden Supercars podium, while driving for the winning powerhouse that is Triple Eight Race Engineering.

Qualifying on the front-row alongside teammate van Gisbergen for Race 4, meant that the reigning Super2 champion was in with a chance and indeed Feeney capitalised immediately – marching into the lead at the start.

Feeney by the time he arrived at the Turn 4 hairpin, already had a sizeable gap to the highly rated van Gisbergen though that lead was unfortunately eradicated due to a red flag suspending the race – when Jack Le Brocq and Andre Heimgartner came together at the final corner.

Following the stoppage, Feeney restarted the race as leader though van Gisbergen had the better getaway after the Safety Car pulled in and rounded up his rookie teammate to take the lead of the 44-lapper.

Lap 17 saw Feeney pit in order to cover the threat of David Reynolds, who’d eventually finish third for Grove Racing. Van Gisbergen went till Lap 27 before taking his mandatory pit-stop and then on fresher tyres had the upper hand over his teammate.

Feeney offered little resistance at the hairpin, going wide as van Gisbergen retook the lead and went on for a fourth Tasmania win in six races. Though importantly it was another race of learning for the 19-year old and was rewarded by second place.

Slade acquaints himself with Symmons Pains

After just missing out on a top ten finish in Race 3, Tim Slade’s Symmons Plains experience in 2022 got a lot more painful on Sunday – packed with multiple incidents and grid penalty he’ll take into Race 5.

The 36-year old tangled with reigning champion van Gisbergen during the dying stages of Race 5’s qualifying, with both cars getting together at Turn 6 and ending up on the grass. Van Gisbergen remarked following the incident, “at the last minute he’s come back onto the racing line,” as the Kiwi’s final attempt at a fast lap was effectively spoilt by the incident.

Slade had set the ninth fastest lap of the session, however the time was initially deleted and the Cooldrive Mustang dropping to tenth. Then a three-place grid drop was applied, further punishing the two-time Supercars race winner.

Onto Race 4 and after Waters declared on Saturday about beating van Gisbergen at his own hard racing game, Slade unfortunately fell afoul of the Monster Energy Mustang down the back straight.

Waters on Lap 20 pushed Slade as wide as possible going around Turn 5, until the Cooldrive Mustang ended up in the grass again – bowling sideways off the track through Turn 6, thankfully missing any other car when Slade crossed back over.

Post-race, Slade branded the incident as a ‘bonehead move’ and highlighted the frustration at Tickford racer Waters, of whom the Blanchard Racing Team is a customer. Waters was handed a drive-through penalty to finish 17th, two positions behind Slade’s top fifteen result. 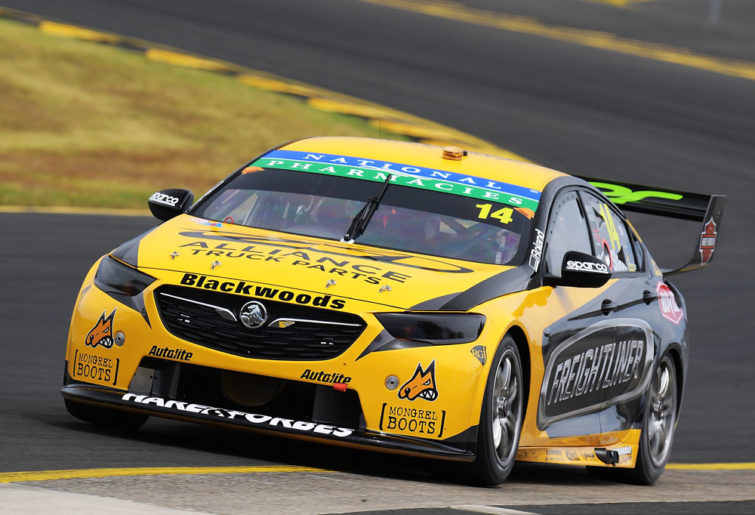 Reigning champion van Gisbergen is beginning to show shades of his dominant start to the 2021 season, after a sweep of the Tasmania SuperSprint taking him to four wins out of the first five races.

At his intimidating best, the Kiwi again muscled his way past polesitter Davison through his favourite run from the hairpin to Turn 6. This was despite Le Brocq leading from the front-row on the first lap, but ultimately the Matt Stone racer pinched his brakes into Turn 4 – with that car having had a hasty repair job following the Race 4 chaos.

With Davison aside, Shell V-Power Racing teammate Anton De Pasquale featured with early race pace to threaten the leading Red Bull Commodore. The Ford squad then pulled the 26-year old in early for the compulsory pit-stop, with hope of undercutting their rivals at Red Bull.

This didn’t come to fruition, as van Gisbergen went long into the first stint and upon re-joining the race following his tyre change, was comfortably ahead of both De Pasquale and Davison.

Van Gisbergen found the chequered flag at the end of the 44-lap finale, 1.1 seconds clear of Davison who moved up a place after teammate De Pasquale went wide at the hairpin. Both Shell V-Power cars survived too a charge from Reynolds’ Penrite Mustang, who finished fourth ahead of Todd Hazelwood.

67-points is the gap between the Kiwi atop the standings ahead of De Pasquale, as again the feeling is that van Gisbergen is in a league of his own. The only way that will change is if the other drivers can mentally block out the two-time champion and return serve the tactical aggression he’s constantly throwing at them.

Easier said than done of course, though it will be eagerly anticipated to see who steps it up for the next round at Albert Park, in support of the Formula One Australian Grand Prix in a fortnight’s time.