The Roar
29th March, 2022
7
Join the conversation
Advertisement
Write for The Roar

The Socceroos will still be bitterly disappointed after failing to auto-qualify for the World Cup after losing to Japan. They now have to brush themselves off and finish this stage of qualifying against Saudi Arabia.

While this is essentially a dead rubber with Saudi Arabia already qualified, the Socceroos will need to test their combinations and give some youngsters a chance ahead of the do-or-die playoff leg.

Australia will play either UAE, Iraq or Lebanon at the beginning of June in a one-off playoff match. Win that and then they have to get through the fifth-placed South American side.

What time do the Socceroos play Saudi Arabia?

Kick-off for the Socceroos vs Saudi Arabia game at King Abudullah Sports City is scheduled for Wednesday morning, March 30 at 5am AEDT.

How do you watch the Socceroos vs Japan?

Channel Ten and 10play have the rights for Socceroos friendlies and World Cup qualifying games.

Channel 10 can be found on free-to-air television or if you’d prefer to stream the action you can find the match on the 10 Play app which is available on mobile devices, internet browser or through various smart TVs.

Who is in the Socceroos squad? 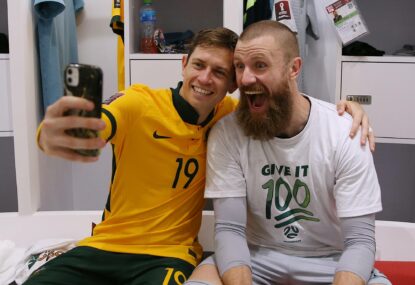