Brett, Harry and Michael (a halfback, No 8 and wing, respectively) dove headfirst into tackling the Banks/Tupou/Zander cards, and where rugby is or should be headed on head knocks.

Michael opined the Zander red was right, but Banks deserved orange. Then Michael argued with himself, until Brett launched into Brumbies-Reds rivalry chatter. Escalating the feud, Brett and Michael wore their teams’ jerseys on pod.

Get into The Roar Rugby Podcast right here on your favourite podcast app. And please, give us a review – it would mean so much to Harry.

Michael was on field for the Reds-Waratahs match in Round 7 (“I can confirm it was wet. I had a hole in my umbrella.”) Harry observed Stan had Jed Holloway on cameras and mike whilst he was stretching in that heavy rain: “Jed Holloway is the Jennifer Beale of Super Rugby.”

Flashdance references aside, Michael and Brett were effusive in praising Moana Pasifika for their inaugural win.

Harry reckoned “it was the most physical Super Rugby match since South African teams left the comp.”

As the main topic was player safety, Harry praised the losing Hurricanes for pulling their best player, Jordie Barrett, immediately on suspicion of concussion.

Brett led a discussion of recent card decisions and appeals, and Michael demonstrated how gray an issue red vs orange vs yellow is by debating himself. And winning.

Michael admitted he “teeters on the line of that’s not a card” but from the sideline knew “no question Zander was in a position to make a better tackle,” but pointed out he was probably just “trying to whack a good mate.” Cut and dried.

“He got it completely wrong and is paying the price,” Michael noted and waved off the argument of bouncing off the first tackler’s arm.

The Tom Banks “tackle” was dissected in detail, as was the issue of body height in general.

Harry declared “Banks had as much time to change his mind as Will Smith did at the Oscars.”

He commented the carrier had his left rib cage and hip open for a hit to attempt to stop the try. “Under the process, of course it’s avoidable. High or low wouldn’t stop the try. He had to launch into the carrier safely.”

Brett contrasted the Jordan Petaia tackle, as being farther from the try line.

Michael wondered if “Banks thought Pulu might go for the corner” but it was “a rubbish tackle” even if, as Michael freely admitted, “coming from a former winger or fullback, who thought if you got through 14 other blokes, who am I to stop you?”

Michael did make a caveat: “Head to head is really accidental. It’s different to just not dropping your shoulder. There’s something about a head on head clash that is so accidental.”

Brett spoke of intent, but all agreed Angus Gardner seemed to get the framework perfectly right, only to be overruled by the judicial panel.

Brett thought Gus Gardner, the TMO, the assistants, and the judiciary all went through their processes and reached a “logical conclusion and both right.” Harry thought the judiciary nullified a good call.

Harry commented the framework may have different words but it comes back to “what you learned when you were a little guy playing barefoot rugby: you have to hit the zone.” He wondered if it comes from coaching choke tackles, two-man tackles, “French tackles.”

“Our sport has always been a body height sport and we have to go back to the right height.”

Harry weighed in on rugby’s “lack of jurisprudence” due to unpredictable decisions and how private equity may change this incoherence by simplifying things. “Bad facts make bad law.”

The problem of purely accidental head knocks remains unsolved. Michael would prefer to reserve the red card for really dirty play, like gouging. He discussed how rugby is likely doing mitigation of liability in much of this.

Michael got big picture: “Rugby does it pretty well now. But we must remain steadfast. The old way of thinking, you’ll be alright mate, get back out there next week, no. The long-term effects, that’s where there is an issue. Trying to completely sterilize the game in all areas of contact, that’s where it gets murky.”

Brett raised the topic of coach liability for head knocks to curb danger. Harry agreed tackle coaching is more about dominance and turnovers and this raises height, and change does happen more at coaching level. But he wondered if rugby can mitigate risk to the sport better by mimicking the UFC in which danger is clear and well warned, but players are not pushed back into the game too soon.

Not that Harry stayed sober. He declared Brumbies lock Nick Frost as “the second coming of Rob Simmons,” which met with a frosty reception by Brumby Brett, but was praised as spot on by Red pundit Michael. “Rob Simmons played over a hundred Tests for the Wallabies.” This triggered a melee between Brett and Michael, but no cards.

It wasn’t all judiciary talk. The Roar Rugby Podcast continues its rise up pod charts by weaving in philosophy and hair grooming. Michael enervated Brett by enabling Harry’s odd obsession with the logos of the Highlanders (shaved armpits) and Chiefs (covered armpits, but as Michael noted, still “rather noticeably hairless”). Relevant? Yes, because it relates to tackle height: “aim for the armpit,” preached Harry.

Harry waxed lyrical about trees: “There are many trees in the forest. They are all different. None is the same. But they are all beautiful.” Brett wondered if Harry had a head knock.

Harry extolled watching young Evan Roos of the Stormers, best carrier in the URC, who went head to head with aging Duane Vermeulen of Ulster. He listed Roos as the best candidate to inherit the Springbok No 8 jersey ahead of Jasper Wiese (“not convinced’), Elrigh Louw, Dayimani, Buthelezi, Augustus, and Notshe. “Defends like he is possessed.”

The lads looked forward to the rematch of Reds and Brumbies. Michael recounted how razor close the rivalry has been. “Forty points separate them over the last eight games,” noted Brett. Michael remarked that 14 of the last 15 games have been won by the home team. “It’s surpassed Queensland-New South Wales. There’s hatred. It’s part of what makes it so good.”

Another tasty round of Super Rugby awaits. Listen to the podcast on any channel you choose, comment here or rate it, and give Brett and Harry ideas on what you’d like discussed. 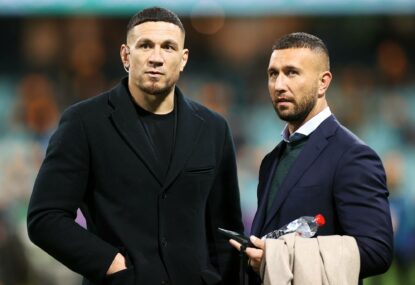 Australia faces a mountain to climb in the Rugby Championship after losing two key men in a week, but they started their ascent with…

One of the Wallabies' best overseas wins in years has seen them start The Rugby Championship on a high, with a comeback 41-26 win…

"F--k... I knew this was gonna happen! I told my missus it was building up, and I knew it was gonna come out at… 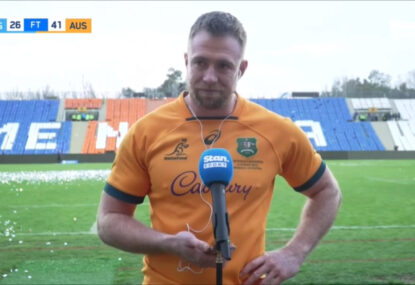