Why no man is an island: backfield dynamics in Super Rugby Round 6

Back in 1624, the poet John Donne famously pronounced that “No man is an island entire of itself; every man is a piece of a continent, a part of the main.”

That saying has since passed into the English language as one of the most powerful warnings against the dangers of isolationism in any field of endeavour – whether it is in the area of politics, economics, culture or sports.

Translate it to rugby, and you find coaches spending the greatest proportion of their time trying to increase connectivity, both within, and between separate units in the team.

In this recent article, I took a peek at how Queensland’s Jordan Petaia and Will Harrison of New South Wales might fit the bill as a Wallaby fullback in 2022. It was mostly an exploration of individual potential in the role.

A few games further down the line, and we have much more information about how both ‘live’ development projects like Petaia, and regular contenders like Reece Hodge can work in concert with others in a backfield, particularly on defence and within the kicking game.

Backfield organisation connects the fullback to the two wings, and frequently to other players like the two halves, who will sometimes drop into a backfield role during phase attacks by the opposition.

Join The Roar experts Brett McKay and Harry Jones, along with Channel 9 rugby reporter Michael Atkinson as they breakdown the big flashpoints from the Super Rugby Pacific round. Play it here or follow in your podcast app.

This kind of connectivity is a potential strength for the Melbourne Rebels, with two current Wallabies in their back three in the form of Reece Hodge at fullback and Andrew Kellaway on the right wing. It is no accident that the Rebels’ emphatic weekend win over the Fijian Drua has coincided with a steady rise in the form of Hodge and Kellaway.

The principle of ‘connectivity’ in a back three is simple, but often passes unnoticed until the moment of its absence is felt: 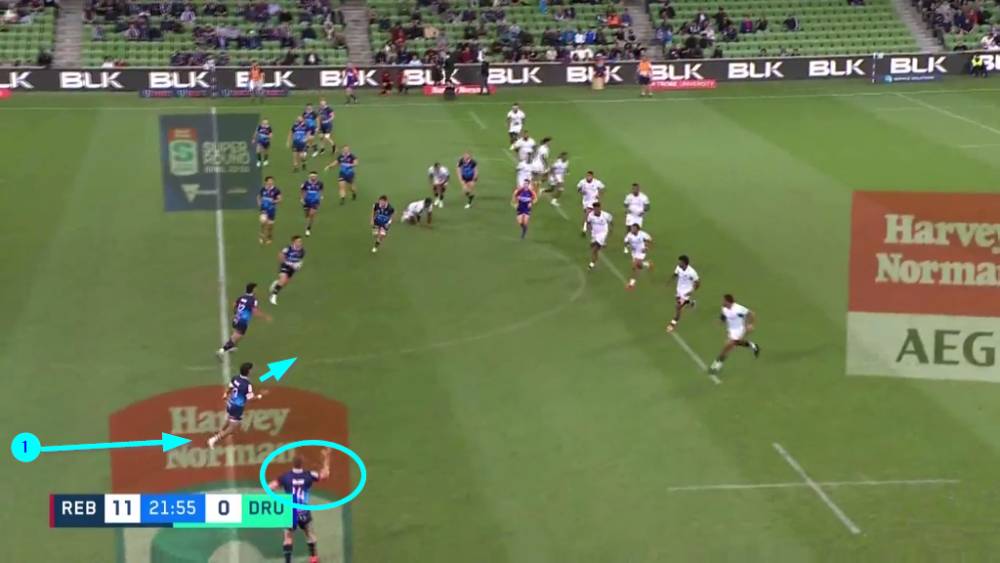 The Drua have just turned over the ball in midfield, and the communication in the Rebels’ ranks comes from the outside, in towards Matt Toomua as he weighs up his options.

Andrew Kellaway signals the space down the right, and Reece Hodge immediately motors up from his backfield island. The wing puts in an inch-perfect kick, pinning the Drua in their own in-goal area and forcing the goal-line drop-out. It may not look like much, but this is the kind of sustained territorial pressure which wins Test matches.

In the following example, Cabous Eloff (who enjoyed an outstanding game) rips the ball away, and Hodge immediately shifts from the left side of the field over to the right to take over from Toomua at first receiver and launch a booming exit punt downfield:

It is another small adjustment which makes a big difference. Hodge excelled on defence too. It is always difficult for the fullback to position himself accurately when a dangerous opponent like the Drua begins to run out of their own 22. He has a lot of real estate to cover against the kicking game, whether short or long: 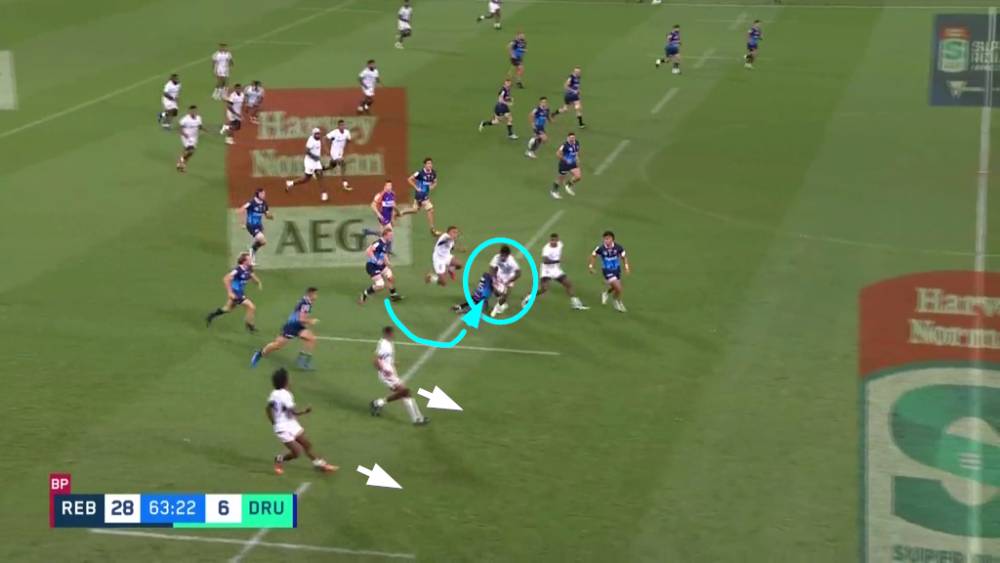 Hodge has to be able to make a tackle decisive enough to forestall a four-man overlap after the last Rebels defender slips over on the turn. He stops the ball-carrier dead in his tracks, and that takes the Fijian support players past the offload opportunity while bringing Sam Wallis into play for the turnover.

Reece Hodge was also highly instrumental in Melbourne’s first try of the match, firstly making the initial break from a kick, then connecting with Toomua to provide width, and finally supporting Kellaway after moved play all the way up to the Drua goal-line:

That is the glue that makes attacking moves work.

The match between the Reds and the Waratahs began inauspiciously for the two equivalents to Hodge and Kellaway in the Queensland team, Jordie Petaia and Jock Campbell:

This is a facet of the Reds’ wide defence I have observed on previous occasions: the last line defender tends to run past the ball, and becomes disconnected from the backfield man sitting behind him: 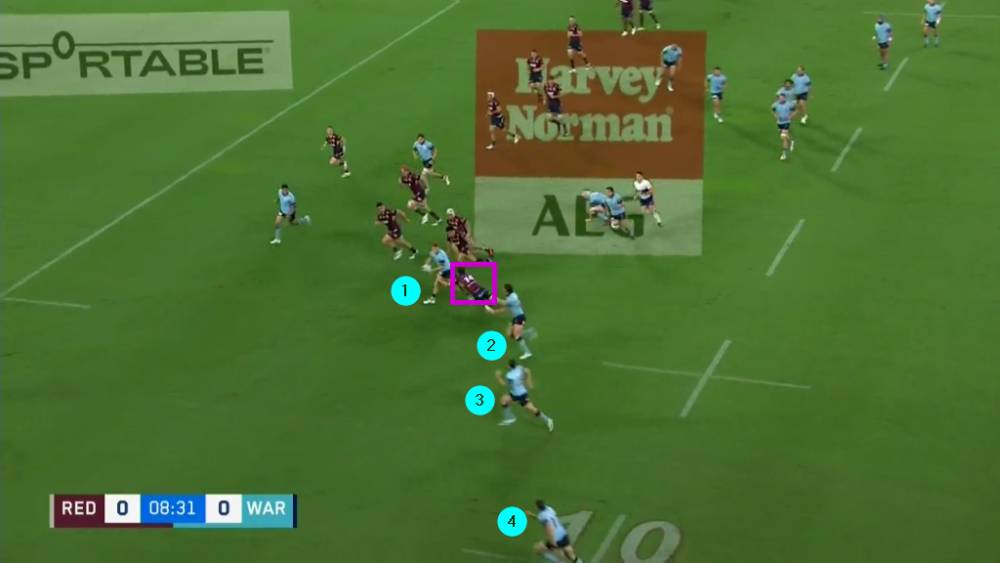 Campbell has run past the ball, and Jordie is nowhere in shot with four Waratahs involved in the break. It was just about the only defensive mistake the pair made for the remainder of the game.

It is important to have strong voices back ‘on the island’ with so much ground to cover, as two or three players strive to manage the whole width of the field in the kicking game, or in scramble defence. It becomes absolutely essential when teams lose players to cards, and the backfield has its protection even further depleted.

That is exactly what happened to the Queensland Reds on Saturday evening. The Reds lost their loose-head prop Dane Zander to a 20-minute red card for a high challenge on his opposite number Ruan Smith in the 31st minute. The problem was then compounded by a yellow on Tate McDermott, for a deliberate knock-on only one minute before half time. For ten minutes, Queensland were down to 13 men.

Before the cards ever materialized, the Reds had given notice that they were going to control the kicking game from the back:

First Petaia pins Tane Edmed deep in the Tahs’ left corner, forcing a ‘lift’ from which James O’Connor can survey the full panoramic width of the field, and pick his spot for a killing 50/22 punt.

The crux of the match was decided by the Queensland backfield defence when the Reds were reduced to 13 players:

NSW scrum-half Jack Grant kicks ahead after a long break by Lalakai Foketi, but Petaia (with a little bit of help from Campbell) is able to clean up at the back and launch a huge punt of his own downfield. The sequence ended with a Queensland lineout throw on the New South Wales 30 metre line – a not-so-little victory for the maroon backfield.

It was not the only occasion where Jordie saved the day as the last line of defence against the kicking game:

He not only makes the goal-line ‘save’ against a very good kick-through from Alex Newsome, he has the nous the keep the ball in play so that the Waratahs do not benefit from a close-range attacking lineout throw. The little connective ‘ligaments’ of the action on defence really do matter.

The sequence that illustrated Queensland’s backfield cohesion the best occurred when they were two players short, and their greatest rivals were ramping up the pressure on wide-to-wide attacks: 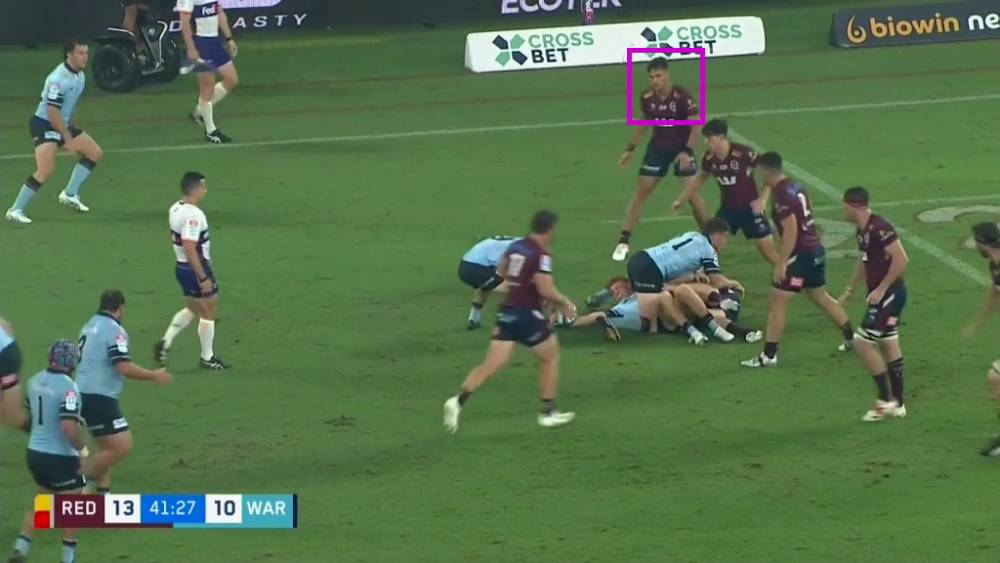 Petaia is on the right edge next to Campbell at the start of the action, but in the space of two phases and 20 seconds he is making a decisive stop on Mark Nawaqanitase outside Josh Flook on the left.

Readers pointed out that Petaia was making a tackle on the wrong shoulder, and putting his head in harm’s way in this game versus the Drua:

He is using exactly the same technique in this instance: 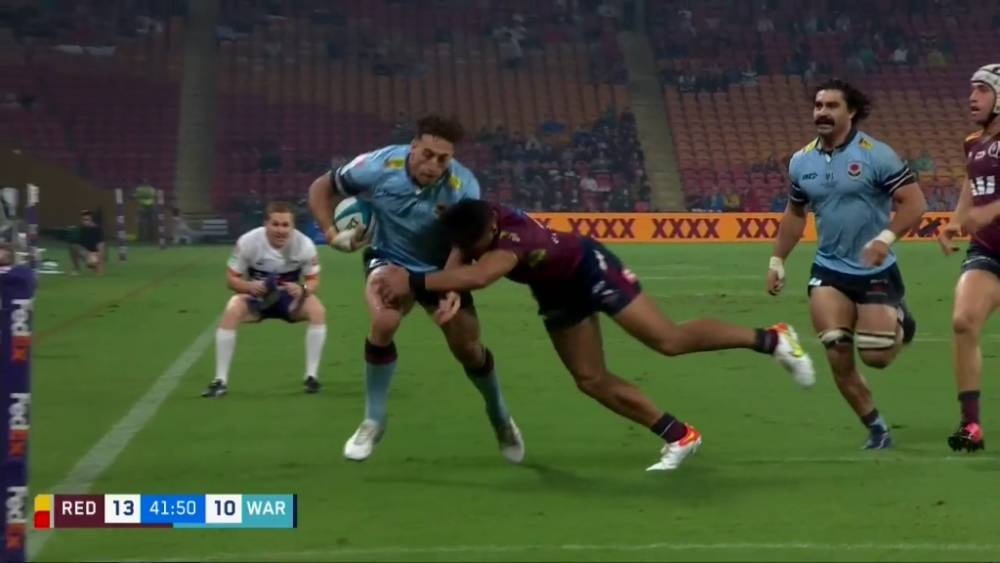 In the cold light of day, it is hard indeed to see how Petaia could stop a man as big and athletic on the finish as Nawaqanitase, without pushing his head across the attacker’s chest and driving on the opposite shoulder. A left shoulder tackle would just not get the job done.

Jock Campbell’s late interception with even numbers restored, was just the cherry on top of the backfield cake:

In this instance he leaves his move late and does not make the passer’s decision for him, and the outcome is a breakaway try.

Summary
Dave Rennie’s options in the back three are beginning to get very tasty as a positive queue starts to form outside his selection ‘office’ – even in the potential absence of Marika Koroibete on the left wing.

Jordie Petaia is rapidly warning up to his task as the Queensland Reds new number 15 and is forming an excellent relationship with Jock Campbell in the twin fullback roles. Meanwhile down in Melbourne, Reece Hodge and Andrew Kellaway are beginning to rehearse the quality that made them Wallaby regulars in 2021.

The success of any back three combination is often most visible in their collective attention to the small and often unglamorous details of the game: the ability to communicate and offer support in attack, to connect in the vulnerable defensive space between the front line and backfield, to win the duels in the kicking game. It is not all about breaks and run metres on the stats sheet afterwards. Far from it.

No man is an island, and that statement rings especially true for the fullback and his two wing-men. Getting the chemistry exactly right will be Dave Rennie’s priority for the visit of England in July. Every player will have to be a piece of the same continent, and ‘a part of the main’ in order to overcome the oldest of enemies.

*Please note that Coach’s Corner will now be once per month, not once per week. The next issue will be on Friday 29th April – feel free to ask any questions in the usual Wednesday column.