The Mexican scored a penalty, won another spot kick for Craig Noone to convert and then set up Al Hassan Toure as the Bulls overcame a two-goal deficit and being a man down to end a three-game winless run.

Toure turned provider for fellow substitute Moudi Najjar in the sixth minute of stoppage time to complete the comeback with Macarthur’s fourth goal.

Giordano Colli’s opener inside the first minute and Trent Ostler’s first ALM goal had put the Glory two goals up inside 20 minutes but Macarthur’s fightback means Perth are without a win in ten games.

The Bulls’ win, which lifts them to third on the ladder, came despite Charles M’Mombwa being sent off for a second yellow card offence midway through the second half.

“We’re so fortunate to have a player of his calibre at the football club and I’m so proud to have him as our captain,” Bulls coach Ante Milicic said of Davila.

“He leads on and off the field but tonight he showed his quality. He stepped up.

“When a team’s going through a bit of adversity and then when you’re down, that’s when you see if you’re a real player who wants the ball… when things weren’t going for us he said that he’s going to make a difference and he did that.”

Colli’s free-kick after 44 seconds – the fastest goal in the ALM this season – gave last-placed Glory the perfect start.

Things got even better for the visitors in the 18th minute when Ostler, celebrating his 20th birthday with his first ALM start, fired home from close range to make it 2-0 to the Glory.

It took a slice of fortune for Macarthur to get on the scoreboard despite their dominance.

Defender Darryl Lachman was caught out when Davila missed a header inside the box, unable to react as the ball struck his arm.

Referee Jonathan Barreiro checked a replay on the pitchside monitor and awarded the penalty which Davila converted. 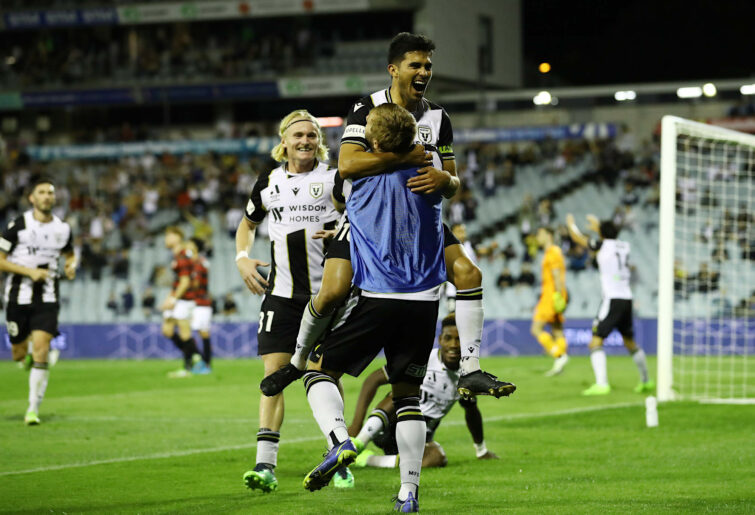 Macarthur were awarded another penalty when Davila’s shot was blocked by Jonathan Aspropotamitis’s arm ten minutes into the second half, which Noone scored despite Liam Reddy getting his fingertips to the ball.

Just when the hosts started to feel they could push on for a winner, the game turned again when M’Mombwa was given his second yellow card after encroaching to block another Colli free-kick in the 66th minute.

Encouraged, Perth threw everything at the game with substitutes Callum Timmins and Ciaran Bramwell both missing great opportunities late in the second half.

The Glory were punished for those missed chances in the 82nd minute when Davila’s defence-splitting pass found substitute Toure who fired home to put the Bulls ahead.

The win was sealed in the 96th minute when Toure linked with Najjar to complete a swift counter-attack and put the icing on the cake for the Bulls.

“I’m proud of the way they went about their business but more obviously, a bit disappointed not to get something out of that game because I think we did enough to take something.