Round 3 of the 2022 AFL season ended with the classic Western Derby, which saw Fremantle and West Coast battle head to head at Optus Stadium.

In the 54th instalment of the derby, both teams were looking to redeem themselves after disappointing Round 2 losses to St Kilda and North Melbourne respectively.

A tight first quarter saw just an eight-point margin go the way of Fremantle, before pulling ahead to a half-time lead of 42-8, with West Coast going goalless in the second half.

After a hot start to the third quarter for West Coast, the Dockers were able to wrestle the momentum back, scoring the next three goals, and leading by 36 heading into the final term.

Fremantle then put the icing on the cake, kicking six goals to three in the final term to win 102-47 in comprehensive fashion.

West Coast veteran Shannon Hurn was the best on ground for the hosts, with 27 disposals and 12 marks, but it wasn’t enough to stop the powerful Dockers, with Taberner kicking three goals, and Brayshaw with 26 disposals.

The painful start to 2022 for West Coast continued, with numerous injuries and many players out due to COVID-19 protocols.

Fremantle’s 55-point win was their third-largest winning margin in a derby, and West Coast’s (7.5) 47 was their lowest-ever Derby score. The win boosted the Dockers into fifth place on the ladder, while West Coast fell to 17th.

Round 4 kicks off on Thursday night with Port Adelaide taking on the Demons. 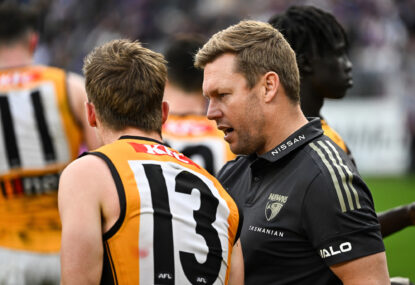 It turns out the Dockers are still premiership contenders after all. In another example of an extreme overreaction to results, it was but a… 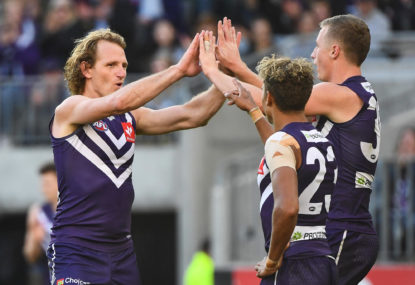