Should the Brumbies be alert or alarmed after a Reds redemption?

It is not often that you get a word, or even a shrug out of Queensland Reds coach Brad Thorn before the game. He tends to leave the pre-match hype and referee ‘influencing’ to the likes of Eddie Jones and Warren Gatland. They love the limelight, and the tactical skirmishes in the media far more.

Prior to the second game in the space of three weeks between the top power-brokers in Australian domestic rugby, big Brad felt sufficiently motivated to make an appearance, like a gunslinger in the main street of an Old Western town, slowly rolling his cheroot from one side of his mouth to the other.

The eyes narrowed and glinted, and ‘Thorny’ was on the draw fast. He said what he had come to say, and his target was the scrum:

“The scrum going to ground, we’re not about that here.

“If you look at the last four years, with Cameron Lillicrap [as the Reds’ scrum coach]. We feel we get dominance and we’ll be looking to compete there.

“He’s been around the game a long time, he’s quality and then you’ve got a scrummaging lock [Thorn himself], we are passionate around the scrum.

“I’m just saying we want to scrum and everyone knows that. We want to play positively.

“You just want to have a good game of rugby … we’re in the entertainment business.”

Brad Thorn left some strong memories at Leinster, as a 37 year-old in the twilight of a playing career shimmering with trophies from two codes.

Ireland centre Gordon D’Arcy remembers Thorn insisting on the importance of body height at ruck time in his gravelly drawl, over and over again, until they got it right. For prop Mike Ross, who sat in front of the ex-All Black’s power in the scrum for three months, it was even more simple: “He compresses my spine in new and interesting ways.”

As a player, the game for Brad Thorn was all about relentless power, hard work, and technical excellence at scrum-time and in contact. Beyond that, Rugby could take care of itself.

The return match against the Brumbies probably came as close as a game ever will to Brad Thorn’s pure vision of how rugby can be played. The Reds beat up the Brumbies physically, any which they could – even with 14 men, after flanker Tuaina Taii Tualima had been sent off for a head-high cleanout on James Slipper in the 34th minute.

In the process, they cast doubt on the legitimacy of a selection which included no less than seven Canberra tight forwards – two props (Allan Alaalatoa and James Slipper), two hookers (Lachlan Lonergan and Folau Fainga’a), and three second rows (Caderyn Neville, Nick Frost and Darcy Swain) – in Dave Rennie’s extended Wallabies squad, but only one Red (Taniela Tupou).

On form, only James Slipper and Nick Frost might stand a chance of cracking the Queensland starting line-up. Queensland attacked the breakdown lustily, winning seven turnovers in contact and reducing the Ponies to a miserable 85% ruck retention rate.

The men from Canberra are usually in their element when they can access the opposition 22 and start their attack from a lineout drive, but at the Suncorp they came away with a paltry average of only 1.17 points per visit, on nine attempts.

At the scrum Brad Thorn got what he wanted, with his charges winning one more penalty and one more turnover than their opponents and bossing the set-piece, even in the 20-minute period when they were down to seven forwards.

Let’s take a look at those last two aspects of the Reds’ physical dominance, in defence of the close-range lineout drive, and in every aspect of the scrum. The first example at the maul came just after Tulaima’s red card, with the Brumbies forwards licking their lips at a five-metre lineout: 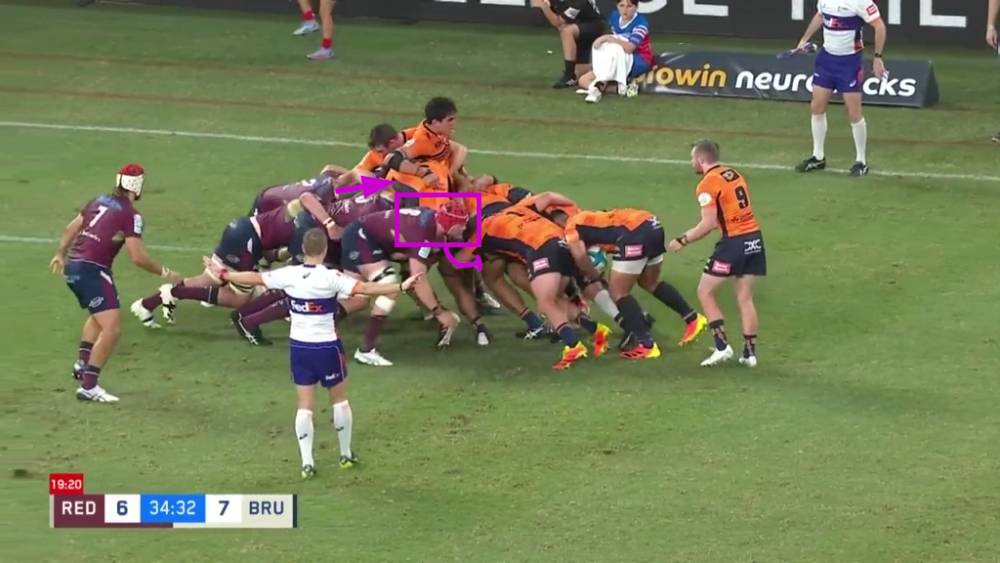 Second row Angus Blyth (in the number 5 jersey) is one of the unheralded workhorses of the Queensland pack and he will never be a spectacular lineout leaper or highlight-reel ball-handler. He is in the side to hit rucks and dig in at mauls, much as Brad Thorn used to do as a player back in the day. Against the Brumbies, he hit 10 more rucks than any other forward, and finished top of the pops as a significant cleanout player.

Here Queensland hold all the trump cards right from the start. Blyth jams into the space on the outside of the receiver Darcy Swain ahead of Rob Valetini, so that there is no way the Brumbies can perform their favourite manoeuvre and roll the maul infield. Harry Wilson (in the red hat) has his head up and can contain Folau Fainga’a and Ryan Lonergan on the edge if they try to break out to the openside. The drive is dead in the water.

Blyth was also central to a second excellent piece of maul defence a few minutes later:

The Queensland second row swims right through the middle and on to scrum-half Ryan Lonergan, then traps him above a pile of bodies as the drive collapses over the maroon goal-line. That means a goal-line dropout to Queensland, not a 5m scrum feed to the Ponies.

The Brumbies’ final opportunity to make hay while the sun still shone came only a minute-and-a-half before the red card on Tulaima expired:

The two big men from Canberra (Swain and Nick Frost) are chucked out of the early stages of the drive unceremoniously, while Blyth and his partner in crime Ryan Smith (who also won two turnovers on the ground) reload more quickly than their opponents to stymie forward momentum and force a turnover scrum.

That returned the game to Queensland’s greatest area of physical advantage. After a forgettable start in which all four of the first four scrums ended in penalties (three for collapses, as Brad Thorn had feared), Angus Gardner managed to produce positive outcomes from 15 of the next 17 set-pieces, and that suited the Reds down to their boot-laces.

They had already proved that they had wood on the Brumbies scrum in 2021:

Taniela Tupou shifted slightly inside his man, Brandon Paenga-Amosa drilled the gap between Allan Alaalatoa and his hooker, and none of the Brumbies’ Wallaby squad rakes were able to survive the pressure, whether it was Lachlan Lonergan of Folau Fainga’a.

Queensland’s new hooker Josh Nasser proved himself eminently capable of producing the same results as his forebear in the number 2 jersey, early on in proceedings: 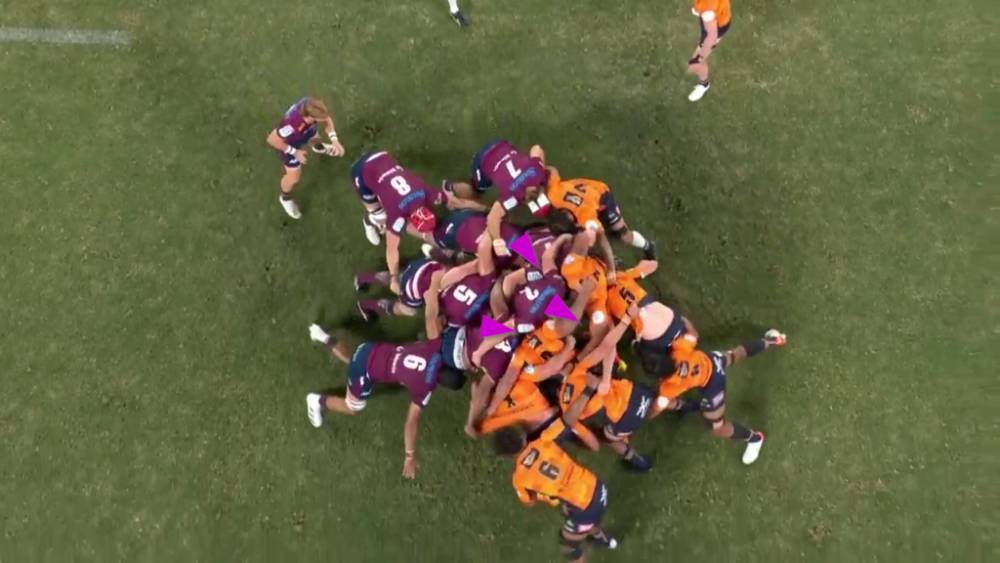 First the bind between Fainga’a and Alaalatoa comes undone, then the gap opens and the Brumbies’ hooker ends up flat on his back. That is domination, and it raises an urgent question why there are two Canberra number 2’s in the Wallaby squad ahead of Nasser.

The ever-increasing comfort of the Reds scrum, under Angus Gardner’s sympathetic stewardship, was the key to Queensland’s first try of the game just after half-time: 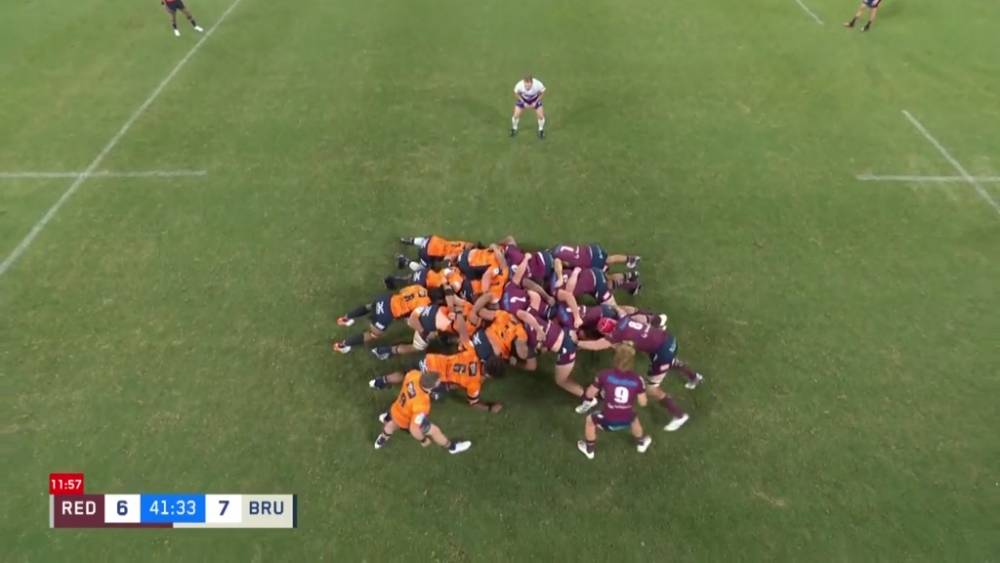 The Reds are pushing with six forwards, with Tulaima off the field and Harry Wilson in channel one hanging on by the arms alone. But Fainga’a and AAA are still split and the maroon scrum is still moving forwards. The rest of the sequence illustrated the impact Jordan Petaia is beginning to enjoy from full-back as the games get bigger:

The floodgates at scrum-time opened when Lachlan Lonergan came on to replace Fainga’a:

The nice part is that Gardner keeps the game flowing and asks the ball to be played away from the set-piece under advantage, knowing he can always come back for the penalty. No doubt Brad Thorn would have been rubbing his hands in approval in the coach’s booth.

It also encouraged his team to continue using ‘channel one’ on attack:

If Petaia can hang on to the ball, a try on the short-side is almost certain. It was only a glitch, because Queensland scored from the very next scrum feed:

Josh Nasser erupts through the bind between Lonergan and ‘triple A’ once again and Rob Valetini cannot make the save at the base. A couple of plays later, Queensland scored their second try to put the fate of the game beyond any doubt:

Another Reds scrum in the dying embers of the game summarized the dual themes of physical domination and constructive officiating in that key aspect of the game:

Yes, there is a penalty as the Brumbies pull out of the contest – but play on, and let advantage develop from usable ball. That fits the scrum’s role in the future of the game more snugly.

It may have finished at only 21-7 but make no mistake, twww.phohe game on Saturday evening at the Suncorp represented a much bigger psychological blow than any struck between the two top sides in the Australian half of Super Rugby Pacific over the past couple of seasons.

The Queensland Reds dominated their great modern rivals from Canberra in every physical aspect of the game that mattered. They stole their ruck ball at will, they brought their speciality close-range driving lineouts to a grinding halt, and they battered the Ponies’ scrum.

As Brad Thorn had politely requested, Angus Gardner allowed his men to scrummage. Where Damon Murphy had generated only five usable balls from 19 ‘sets’ in round five, Gardner produced 15 out of 21 positive outcomes two weeks later. He encouraged scrum ball to be played under advantage, and the Reds responded with the constructive use of channel one. Finally, there was a chink of light at the end of the dark tunnel of the officiating of the contemporary scrummage.

The match should provoke some urgent rethinks among the Wallaby coaches about the quality of the Brumbies’ tight forwards. Angus Blyth and Ryan Smith may be more Ian Gough than Alun-Wyn Jones, more grunt than glitterati, but they outshone their more highly-touted opponents in the second row on the day.

Likewise, Harry Hoopert, Josh Nasser and Taniela Tupou had it over their international opposites in the front row, and it will become hard indeed to justify Nasser’s omission from the Wallaby squad in the months to come. Brad Thorn can squint in the harsh sunlight, throw back his poncho and leave town to an ethereal Sergio Leone riff. At least for now, his job has been done.

Former top ref Jonathan Kaplan joins Brett McKay and Harry Jones for a very special edition of The Roar Rugby Podcast – stream it here or in your favourite podcast app.