The 2021-22 NBA regular season wraps up next week, with just a handful of games for each franchise to play before the play-in tournament and playoffs begin.

Yet the pre-season favourites for the championship won’t even be partaking in the post-season, in what is a fitting finale to a pitiful season for the Los Angeles Lakers.

My suspicion way back in October that the Russell Westbrook trade was a disaster proved prophetic, as the Lakers will somewhat shockingly finish in 11th place in the Western Conference.

Yet I’m far from an NBA Nostradamus, because almost everyone thought the Westbrook fit would be horrendous. Sadly, those people didn’t include LeBron James and Rob Pelinka, who both need to take accountability (i.e. blame) for the catastrophic decision.

The Lakers are currently a farce, and the sooner Jeanie Buss stops running the franchise like a Ma and Pa corner store, the better.

Will the farcical situation the club finds itself in have an impact on James’ official recognitions this season? Well, perhaps the best way to answer that question is to reveal my votes for the MVP award and All NBA teams. (Spoiler alert: I don’t actually get a vote. Outrageous, I know.)

There’s some solid narratives here, which is sadly much too large a part of who receives the MVP trophy each year.

Morant made the leap to superstar, and became arguably the most exciting player in the league. Doncic entered the season out of shape, but exploded in the second half of the season.

Embiid was dominant from start to finish, and may end up leading the league in scoring. While Antetokounmpo was Antetokounmpo, sitting upon his usual throne as the league’s best two-way beast.

Yet we often over-think this award. 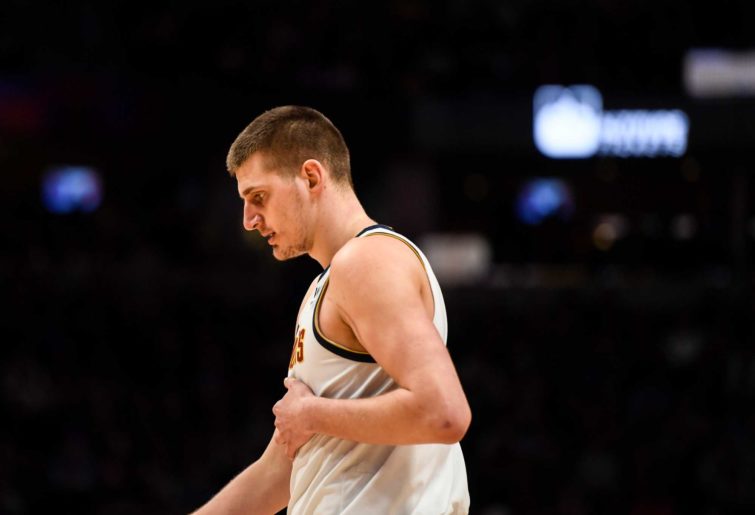 Jokic’s traditional counting stats are amazing. His advanced stats are even more ridiculous. He passes the eye test. He’s a one-man offence, and his defence has improved dramatically. He kept his team afloat despite missing their second and third best players to injury, arguably his greatest achievement this season.

Having won it last year, he may not have the best narrative, and there may be some dreaded voter fatigue. But he doesn’t just tick every other box, he fills them up – just like he does a box score.

Jokic is the MVP this season. And no, James should not even sniff this award.

What about the All NBA teams?

Given my MVP voting, no one should be surprised by my All NBA First Team selections. The only controversy here is how I managed to squeeze two centres – Embiid and Jokic – into the five.

Yet it was a guilt-free decision when you consider Jokic breaks every convention known to basketball. He’s essentially Denver’s point guard. He often plays out of the high post like an old school power forward. He also logs plenty of minutes at his nominal position of centre.

As such, I had no drama in slotting him in at forward, thus allowing me to have the five best players in the league in the All NBA First Team. The way it should be.

The Second Team is where things get a little more interesting.

Curry may have had a poor shooting season by his own lofty standards, but he was many pundits MVP for the first third of the schedule, and that shouldn’t be forgotten when summing up the entire season.

Towns and DeRozan being near on unstoppable on offence, with Minnesota and Chicago having surprisingly successful seasons, earns them the nod as well. In particular, DeRozan winning a handful of games at the buzzer is the type of memorable feat needed to elevate him up and over other worthy contenders.

Tatum, much like Boston, got better and better as season went on. So much so that he’ll actually be unlucky not to make the First Team.

Lastly, Booker was the best player on the best team, and despite a number of injuries, will lead his Suns team to an historic 63-win season (and counting), making him a worthy guard on the Second Team.

Those five selections all seem justifiable enough in a vacuum, but it’s the flow-on effect, which surely raises some eyebrows, as it pushes all-time legends Kevin Durant and LeBron James onto the Third Team.

Sure, it may seem inconceivable to drop these elite veterans down this low, but their teams’ records, the games they missed due to injury, and the impressive CVs submitted by other players this season means as weird it may feel, it’s the right call.

With so many great individual seasons being had, James not making the playoffs becomes a tie-breaker of sorts that relegates him to the Third Team.

To quickly explain the other three selections, in the backcourt, Young and Paul are very different point guards, but both are the expert conductors of their team’s awesome offences.

At centre, it’s become fun to poke fun at Gobert’s clumsy post moves and occasionally embarrassing perimeter defence, but he remains a force in the paint, and will lead the league in rebounds at nearly 15 a game. That’s just crazy, and he deserves recognition on the Third Team.

Oh, and before someone asks why I didn’t nominate my other award winners, here they are: