But the sideline has become her reality for the last week and a half after being one of six Giants Netball players to contract COVID-19 last week.

Parmenter was one of the last players to contract COVID and the squad was hopeful that their game against the Adelaide Thunderbirds could be rescheduled. This request was denied by Netball Australia so Parmenter found herself at home, cheering on her teammates.

“There were another four people in my house isolating with me and we all had our Giants gear on, sending positive vibes to Adelaide.

“I was more nervous watching from the sideline than being on the court because you feel so helpless. It was just the worst feeling and also a little bit surreal not to be there with the team.”

Parmenter was not along though. Sophie Day and Jamie-Lee Price were also isolating and on the phone facetiming Parmenter every five minutes, with a longer group pep talk at half time.

After a request to reschedule the game was denied by Netball Australia, Giants Netball had access to a COVID supplementary player list from other teams and states to help them top the team up.

West Coast Fever training partner Chelsea Pitman was signed as a temporary replacement player by the Giants ahead of their 56-43 point loss the Thunderbirds on the weekend.

For Parmenter, the score did not reflect the intensity of the match, particularly given the number of Super Shots Giants Netball missed in the final quarter. But it did reflect the type of team that the Giants are. 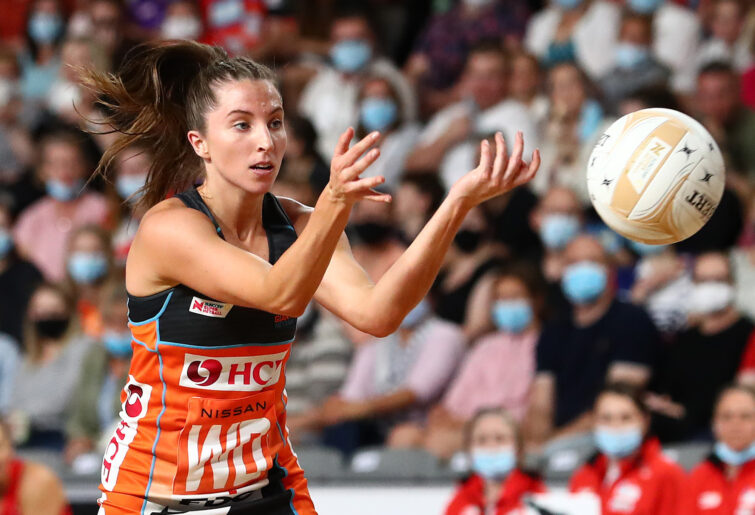 “It took a lot of courage and bravery for the team to go out there with a positive attitude and have a crack,” said Parmenter.

“The squad could have thrown their hands up in the air and said it was too hard, but they kept fighting and the younger players showed plenty of confidence and gave it everything they had.

“Chelsea came in too and fit right in. Everyone was so flexible and adaptable.

“If you can play like that with so many players out, an injury or two should be easy to manage.”

Flexibility and adaptability is something that Giants Netball have become used to over the past 18 months, where they have been running (and flying) from COVID-19 at every turn.

Last year while Sydney was in lockdown, the Giants joined the Swifts in travelling the country to keep the competition alive.

While it was challenging, it taught the squad a lot about each other. It also forced the squad to spend plenty of time together.

It’s that time that Parmenter is missing the most at the moment.

“We’ve spent so much time together over the last two years so it has felt strange being apart from the team for so long. I have FOMO,” said Parmenter.

“And it’s about more than just playing netball too, it’s the stuff away from netball too, like the two nights the team spent in Adelaide.

“We have become really good at away trips and whilst it’s normal for teams to play well at home, we feel like we play really well when we are away, even though COVID has created trust issues for me – I never know if we are actually going away for two days, or if it’s going to turn into ten weeks.”

What her time away from the squad has reinforced is just how valued Parmenter is.

“Everyone is over-checking on me in the nicest possible way,” said Parmenter.

“I’ve bonded more with the team through this experience because it is nice to feel so valued and like they are missing me.

“Because of how much time we spent together last year, I have taken that time together for granted.

“I won’t do that again, I’ve learnt that individual training is not for me.”

Parmenter returned to the team environment yesterday with the plan for her to travel with the extended squad and participate in the captain’s run for her first session in nine days, ahead of the Giants’ game tonight against the Melbourne Vixens.

It marks a busy next week and a half for the Giants. Following their game against the Vixens, the Giants will return to Ken Rosewall Arena to face the Queensland Firebirds on Tuesday, followed by the Collingwood Magpies on Easter Saturday.