There has been no fairytale premiership farewell for Melbourne Demons stalwart Daisy Pearce, as the Adelaide Crows reinforced themselves as the powerhouses of AFL Women’s with a 13-point win in the grand final.

With the home-ground advantage, the Crows started as hot favourites and justified their status as such with a strong performance across the board in a low-scoring match, which saw only six majors booted.

In what was potentially Erin Phillips’ final game for the club, the Crows kept the Dees scoreless in the first quarter and were never headed from start to finish as they took home their third flag, adding to those won in 2017 and 2019.

In the battle of the season’s two best performed teams, it was a war of attrition early on, with Jasmyn Hewitt scoring the only major of the first quarter, while the Dees – playing in their first grand final – were held scoreless.

Things got worse for the visitors when Maddison Gay suffered a leg injury early in the second quarter (though would return to the fray). Not long after, Phillips snapped her first goal of the game, and her 50th career goal, to extend the Crows’ lead to 17 points.

However, Alyssa Bannan pegged one back for the Dees, intercepting a Crows kick out of defence to land her side’s first goal of the afternoon and leave them just ten points in arrears at the long break.

Danielle Ponter got the Crows off and running in the third quarter, but the Dees were quick to hit back through Kate Hore before Tayla Harris – playing in her third grand final against the Crows – missed a set shot at goal that could’ve brought them to within a kick.

The Crows went into the final break just nine points ahead, but they repelled the Dees’ attack, eventually securing their third cup. A late goal to Ponter ensured they couldn’t be caught.

Anne Hatchard, with 26 disposals, was named MVP, becoming the second Crow to be named best-on-ground in a grand final, after Erin Phillips earned that honour in their previous two premierships wins in 2017 and 2019.

It is possible that even if Phillips crosses to Port Adelaide as many suspect she will next season, the six other players could win another one or two premiership medals should the Crows continue their dominance under Matthew Clarke next season and beyond.

It also marked sweet redemption for the ladies from West Lakes, who were on the wrong end of heartbreak when they suffered a three-goal loss to the Brisbane Lions in last year’s decider, which Randall missed due to concussion protocols.

It also means the Crows’ women’s team have now won one more premiership than their men’s counterparts, whose only two flags came all the way back in 1997 and 1998 – coincidentally in the first two years of Port’s existence in the AFL.

The win comes at a crucial time for both the club and the competition, with the Alberton-based Power expected to raid their rivals’ playing list in the coming weeks as they begin building their roster ahead of their entry into the league in the next season, whenever that comes.

Undoubtedly, Phillips would have to be at the top of their target list, and there is nothing they would love to do than to possibly extract one more season out of the 36-year-old veteran (she turns 37 next month) before her inevitable retirement.

Other than the Power, Essendon, Hawthorn and the Sydney Swans are the other three clubs to enter the competition next season, rounding out the full suite of 18 clubs.

Natalie Wood, Bec Goddard (a former Crows premiership-winning coach) and Scott Gowans will be the respective coaches of those clubs. It’s not yet known who will coach Port Adelaide. 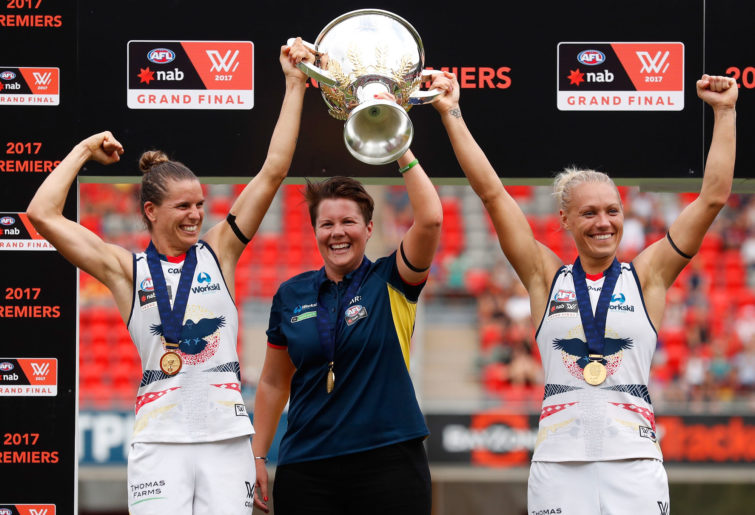 It means the Crows will no longer have South Australia to themselves, as is also the case for the GWS Giants, who were the only AFL Women’s side to support in New South Wales.

As for Melbourne, it was a heartbreaking end to a season of promise that had seen them enter the decider on the back of seven straight wins, and having won ten of 11 matches overall this season, with their loss coming against the Crows at Norwood Oval in Round 4.

It was a bittersweet way for Daisy Pearce to mark her final AFL Women’s game, having announced that she would retire at the end of the season.

They will take plenty of lessons from their maiden grand final appearance into the off-season, and look at where they need to improve and what they need to do if they are to take their game to the next level, like the Crows and Brisbane Lions have done in recent seasons.

The Dees should still be proud of what they’ve achieved this year, following many of near misses including narrowly missing out on the decider in each of the first two seasons, as well as falling short against the Crows in the preliminary final last year.

They qualified for their first grand final by upsetting reigning premiers the Brisbane Lions at the MCG last week, but facing the Crows in front of their home fans at the Adelaide Oval proved to be a step too far.

A win would’ve seen them become the club become the first to hold both the AFL and AFLW premiership cups simultaneously, but despite the women’s side’s failure on grand final day it is proof enough that they are in a better position than they were a decade ago.

The club first fielded a women’s side in the 2013 exhibition match against the Western Bulldogs, in the midst of the men’s side’s most disastrous season in recent history when coach Mark Neeld was sacked as the club threatened to implode both on and off the field.

As we all know, they were able to turn it all around within the space of eight years, with the men’s side smashing a 57-year flag hoodoo last year while the women’s side came agonisingly close to winning their first premiership having worked so long and hard for their opportunity.

While they will be without Daisy Pearce next season, the legacy she has left at the club, and AFL Women’s overall, will never be forgotten.

To finish off, congratulations to the Adelaide Crows, who have cemented themselves as the greatest team of the modern era. But now here lies another challenge: the inevitable loss of several players to arch-rivals Port Adelaide next season.

If they can overcome that and remain in contention for the premiership next season and beyond, then who knows what this club may achieve going forward.

And so that wraps up the sixth season of AFL Women’s and I hope you have enjoyed the season, especially if you are an Adelaide Crows supporter, and my coverage of it.