Melbourne Victory have laid down another symbolic marker of their revival by stunning Melbourne City 3-0 and exorcising the demons of their recent A-League Men derby past.

Running away with the game in the opening 30 minutes thanks to a goal from Jake Brimmer and a brace from Marco Rojas, Saturday marked the first time Victory had tasted success in the derby in 840 days.

In the intervening period, Victory sunk to the lowest of lows while City reached the highest of highs, supplanting their rivals at the Melbourne ALM summit and delivering 6-0 and 7-0 humblings in 2020-21.

But on Saturday, that pain was forgotten as Victory ran out rampant, deserved winners. 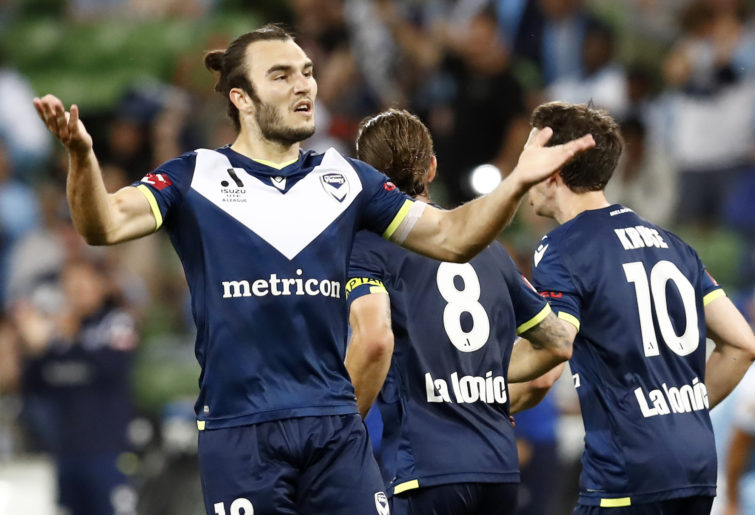 “You only get three points, we understand that, but we haven’t had a win against Melbourne City for a while.

“We had two draws (this season), we feel we’ve improved in each game and today we improved again.

“We deserved to win.”

City controlled possession throughout the game and improved in the second stanza but Victory consistently created better chances after carefully picking their moments to counter and press.

City ended up outshot 17 to five and had just two efforts on target for the whole contest.

“I thought we were poor,” said City coach Patrick Kisnorbo.

“You try coming back, down 3-0 at the second half, it’s very difficult against a good team.”

Fittingly, given that a derby win represents something of a blast from the past for Victory, their evening was highlighted by a vintage performance from Rojas.

Following Brimmer’s fifth-minute penalty, the Kiwi attacker sent Tom Glover’s attempt to clear a free kick straight back over his head from range in the 14th minute and grabbed his brace in the 27th minute with a sweetly struck effort from the edge of the penalty area.

“The last three or four games he’s been so good,” Popovic said of Rojas.

“You can see that the speed and power is returning. The quality was always there but now he’s feeling really good physically and he’s able to show the talent he’s always had.”

Four points back of second-placed Western United with a game in hand, Victory host Brisbane Roar next Tuesday.

City remain eight points clear atop the table ahead of two weeks of Asian Champions League commitments but will sweat on the health of midfielder Florin Berenguer after Kisnorbo confirmed the Frenchman had suffered a hamstring injury.

Elsewhere in the A-League Men on Saturday, an Adam Le Fondre hat trick has helped strengthen Sydney FC’s bid for a finals spot in a 5-0 win over the Central Coast Mariners.

Western Sydney boss Mark Rudan says his side will rally round goalkeeper Daniel Margush after his moment of madness handed the Brisbane Roar a 1-1 draw and dealt the Wanderers’ finals push a big blow.

And Western United are looking to regroup quickly after their premiership aspirations suffered a serious blow in a 4-1 loss to Wellington Phoenix in Ballarat.