Winter is coming: can Aussie teams compete on even terms with New Zealand?

Want to hear a story? Here’s one which still creates good chuckle in any pub conversation on the western side of the Irish Sea. Roll the years back to 1997, with Ireland playing the mighty All Blacks in the old Lansdowne Road stadium at the turn of professionalism.

Typical Irish fire ignites at the start, with tearaway hooker Keith Wood scoring two first half tries on the way to a narrow half-time deficit:

Pies and pints of the black stuff are passed around in the terraces, conviviality and jovial optimism are just as high on the menu. Maybe, just maybe, Ireland can do the unthinkable this time around?

It is another false dawn. In the second half, all illusions are ruthlessly peeled away, as the All Blacks score 36 unanswered points. The bold, luminous yellow letters on the old school scoreboard read 63 points to 15 at the end.

Midway through that bleak second period, the floodlights fail and the crowd huddles as one in a dark, reflective silence. A hopeful voice, ringing out suddenly from the terraces:

There is the hollow echo of laughter, accompanying a deeper acknowledgement that the real possibility of beating New Zealand is as rare as a four-leaf clover.

The story may be apocryphal, but Malcolm O’Kelly was winning his first cap in an illustrious second row career, and he summarised the experience neatly:

“There was a huge disparity in experience and the feeling that the Irish team hadn’t a chance, which was probably a fair reflection of what the two teams were.

“But when we went out that day, we certainly went out thinking ‘we’re going to win’. We were probably a little bit ignorant of how good they were – or at least I was.

“As a first-capper I was too wrapped up in my own little chasm to really respect the team that we were going out against. I was so looking forward to it, it didn’t matter who we were playing. [But] we probably never had a chance of winning that match.”

That story still has some currency as the domestic part of Super Rugby Pacific 2022 draws to a close, and the cross-border games between Australia and New Zealand begin. One year ago, all the Australian optimism from Super Rugby AU was wiped away in Trans-Tasman, with the Aussie franchises winning only two of the 25 contests. The backwash of uncertainty remains, and darkness looms on the horizon once more.

The Crusaders scored nine tries in a 63-28 win on Queensland’s own patch, and it cost them an average of only four passes and two rucks per score to do so.

The Kiwis will finish opportunities because of their superb individual skill-sets in unstructured play, especially when they are able to get prime turnover or kick return ball from the opposition.

The man who provided the assist on the final Crusaders’ try of the game was centre Manasa Mataele. He was at it again – this time on the wing for the Western Force – at the weekend:

Mataele was crowded out by the likes of Sevu Reece, Will Jordan, Leicester Fainga’anuku and George Bridge in Christchurch, but he has been comfortably the best line-breaking wing in Australia in 2022. He also made a spectacular finish in the corner versus the Rebels: 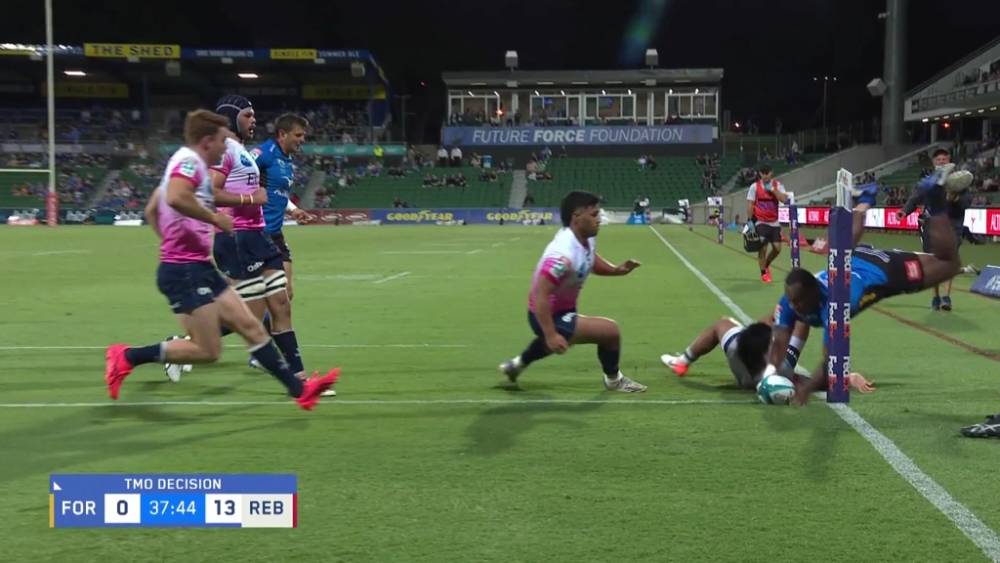 In the modern game, if the last defender cannot get more than one shoulder into the attacker this close to the line, those acrobatics above the corner flag will always do the rest and chalk up the try.

The contrast in finishing power out wide still works in New Zealand’s favour. Compare the handling and decision-making on a kick return try from the Chiefs-Blues game at the weekend…..

….with a simple miss from the Force-Rebels match:

The Australian example should be an easy two-on-one for the Force centre Bayley Kuenzle; the Blues have to do far more work via one pass, two offloads and a pinpoint cross-kick to finish on the other side of the field from the boot of Beauden Barrett, who also happened to initiate the move. The skill-set makes all of the difference between an ugly botch and consummate mastery.

But the main problem Australian teams will face in two weeks’ time is a dramatic increase in physical intensity and the overall speed of play. It will be the job of all five coaching staffs at the RA franchises to ensure that ‘dramatic’ does not become ‘traumatic’ as it did one year ago.

Trauma is exactly what Malcolm O’Kelly experienced 25 years distant: “It was a big wake-up call for me in the second half as some of my weaknesses were exposed: my strength endurance, my ability to stand up the onslaught of the physicality of the game.”

Let’s see how that increase in physical intensity is measured in the stats up to round seven of Super Rugby Pacific:

Australian sides will have to adjust to a 10% increase in ball-in-play time, a 12% increase in the number of rucks set by their opponents, and 20% more lightning-quick ball delivered from those rucks.

It is a tall order when you look at just one of the sequences from the game between the Force and Rebels at the weekend. Between the 21st and 30th minute of the match there were six scrum starters (one complete, two resets, two free-kicks and one penalty), and three lineouts which ended before the second phase of play was finished (the first called back for ‘not straight’, the second a penalty at 1st phase, the third a forward pass on 2nd).

Over nine minutes when the game clock was running, there was a miserable 35 seconds of actual ball-in-play time. Even the two top-drawer matches between the Reds and the Brumbies, compelling as they were, only averaged 27 and a half minutes of ball-in-play. Test-match intensity, it most definitely wasn’t. There were simply too many breaks in play.

This is the real challenge for Australian professional rugby as it stands – to translate its domestic rugby to the higher level represented by cross-border games against teams from New Zealand, and to international series like the July tour by England and the Bledisloe Cup series versus the All Blacks. Darkness needs to come before a dawn, not a black hole consuming the game in Australia.

What does this kind of sustained physical intensity look like in the flesh? Let’s take a look at three sequences from the match between the Blues and the Chiefs at the weekend, which illustrated the titanic contest between lightning-quick recycles, and lightning-quick turnovers at the breakdown in the ‘shaky isles’:

The Blues are on attack, with an initial break and offload by Rieko Ioane, an offload and sub two-second deliveries at the first two breakdowns. It looks like the Chiefs are on the ropes, at least until Samisoni Taukei’aho comes off the tackle to counter-ruck over the top of Luke Romano’s carry in the second clip.

Momentum at the tackle area can change with bewildering speed in New Zealand, and Taukei’aho’s action slows the ball sufficiently for Sam Cane to spoil Blues’ scrum-half Sam Nock on the next phase and force a turnover scrum. It is 35 seconds of play filled with content, and there are no lulls in the storm at the point of contact.

This time it is the Chiefs on offence, with Blues second row Josh Goodhue recovering from the tackle to make the ‘walk-over’ and slow the ball on second phase.

Even then, sharp recovery play around the side of the ruck by Brad Weber, Taukei’aho, and a tip-on by centre Alex Nankivell manages to spring Quinn Tupaea through the hole and set up another prime bit of LQB. But the physical pressure around contact is cut-throat and never slackens. The end-point is another turnover for the defence, via a jackal by Hoskins Sotutu as the ball comes in off the side-line.

One final sequence, with the Blues once again in possession:

As the Blues begin to build attacking momentum off the LQB from the second carry by Goodhue, so the Chiefs defensive intensity goes up a notch, with Pita Gus Sowakula making a decisive frontal tackle and Tupaea swooping for the turnover.

With the darkness looming on the horizon in less than two weeks’ time (and the finals in winter), there is no room for complacency in Australian rugby. Whatever the pros and cons of a domestic ‘conference’ within the country, the acid test always comes when the game moves outside local borders. The acid test is New Zealand, just as it was for Malcolm O’Kelly 25 years ago in Dublin.

The first task for the coaches of all five franchises is to prepare for the physical onslaught in contact, one which will push the resilience of their charges to an absolute limit. They have to ensure that the drama of the challenge does not become trauma.

Like or not, the ball will be in play for longer periods and there will be more rucks. The ball produced from a majority of those breakdowns will be quicker than Australian players are used to while playing among themselves. Recovery times, anaerobic efforts and strength endurance will all be probed for signs of weakness. It will look and feel like a different game from what has gone before.

At the same time, there is a real opportunity for Australian rugby to learn the lessons of 2021, and rise to the challenge from across the Tasman. It took Ireland the better part of 25 professional years to learn how to compete with teams from New Zealand on even terms, but it need not take Australia that long. They have to remember the successes of their forebears against the same opponents – that darkness can precede daylight, and everything does not have to turn pitch-black.