The first Australian Grand Prix in three years may not have been an instant head-turner or wheel-to-wheel cracker, but it didn’t disappoint in powerfully putting Melbourne back on the Formula One stage.

Forecasts for a record crowd were met with one of the biggest seen in Australian sporting history. An estimated 419,114 race-hungry fans flocked through the gates at Albert Park across the four-day event, trumping the previous best weekend for the Melbourne race set in 1996, its first event.

Spending a record time locked down for most of the winter across the past two years has created a craving for live sport and Formula One, which in that time witnessed a titanic championship battle in 2021 between Lewis Hamilton and Max Verstappen.

Cold, late nights and early mornings are a familiar feeling for keen Australian fans of Formula One, and despite the unsociable timing, the passion and persistence were there even when there was no Australian Grand Prix.

Formula One over the past two seasons had seen several changes to its calendar in response to the ongoing effects of the pandemic. Races have completely dropped off the schedule and the demand from new locations is high, especially in the Middle East and United States, where there have been several additions to the roster.

Growing global interest in the sport has also been attributed to the popularity of the Netflix documentary-drama Drive to Survive, which has seen an uptake of more casual interest in Formula One.

Even with established races, such as the Monaco Grand Prix, the so-called jewel in crown, under threat of losing a slot on the calendar, the powerful return of the Australian Grand Prix highlighted how important a market this is for Formula One and the need to continue racing in this part of the world.

The common qualm about Melbourne has always been the lengthy travel from Europe, and that was heard again from the drivers at Albert Park when talking about the pain that the teams endure in their travel and preparation.

Mercedes driver George Russell said, “Having Melbourne in between races, especially as a standalone, is too tough for the teams and everybody.

“I think Melbourne here as the season-opener was really cool because everyone came up here early and there was a lot of excitement and anticipation.

“It needs to be thought about more, there is no reason we couldn’t do a back-to-back with one of the Middle Eastern races. But it feels like another double-header for all the teams with the amount of time they spend in this part of the world.”

Sergio Perez, who was asked about the matter, initially said, “It really has to be back-to-back with one of those races because just coming to Australia for a single race is quite painful for everyone.” 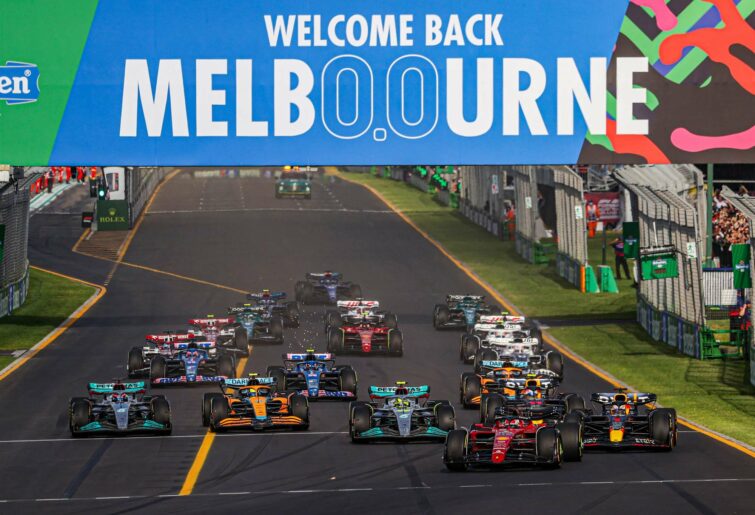 Naturally, however, as the world begins to return to a version of normality, there is an expectation that the Formula One calendar reverts to its pre-COVID normal. This was something Mercedes team boss Toto Wolff suggested when saying he has full confidence in F1 CEO Stefano Domenicali streamlining things for 2023.

Whether this will see Melbourne return as a season opener in the future or be twinned with a Middle Eastern or another Asian race remains to be seen. Australia having its place on the calendar is the key thing given that the sport has been in this country for almost 40 years – and longer if we count the non-championship era – and there has been an Australian presence on the grid since Sir Jack Brabham’s championship-winning days.

For this to truly be a world championship the Australasian region’s presence is a must, and where better to represent it than Melbourne. Seven-time world champion Lewis Hamilton expressed his desire to see a race in Africa next, the only inhabited continent not currently raced on by Formula One.

Many hope that the current cap of 24 races in the Concorde agreement that runs through till the end of 2025 stays, as having any more races would put excessive strain on the teams and crews that travel race to race. Striking a balance between new and the old was the rhetoric from team bosses, including Alpine’s Otmar Szafnauer – keeping the classics like Silverstone, Spa and even Australia but also having the glitzy new events like Miami and Las Vegas.

The modifications made to Albert Park during its time out of Formula One are also a statement of intent from the Australian Grand Prix Corporation that the city is here to continue hosting this event into the future. Such changes to the track and infrastructure wouldn’t have happened had there been an intention to stop beyond the current agreement.

Again, Charles Leclerc may have gone unchallenged in this one, but it is by no means a sign of failure of Melbourne’s commitment to Formula One. If anything, the record attendance and carnival atmosphere should be celebrated following the first two races of 2022.

Spruiking sustainability and a need to go completely carbon neutral by 2030 mean it is up to Formula One to streamline how it travels globally but without ultimately walking away from key and passionate markets like Australia.