It was very much in keeping with the whole vibe of the season to watch Wellington Phoenix run out to a rapturous homecoming reception before promptly being smashed by the Central Coast Mariners.

Kudos to Nick Montgomery and his Mariners side for spoiling the party and dishing out a 4-0 thrashing to the Phoenix in front of 18,184 fans at Sky Stadium in the Kiwi capital on Sunday.

Having belted the Phoenix 5-0 in Gosford barely a fortnight ago, the Mariners made it two big wins from two within a couple of weeks thanks to a clinical display across the Tasman.

But it could have all been so different had Englishman David Ball managed to shoot either side of the inspirational Mark Birighitti in the Mariners goal midway through the first half.

Ball instead stung Birighitti’s palms with a blistering strike on goal, allowing the Mariners to immediately race up-field and open the scoring through Beni N’Kololo on the counter.

It was a goal that clearly took the wind out of Wellington sails and silenced the parochial home crowd, and while the Phoenix only went into the half-time break one goal down, the second from Jason Cummings was another genuine coach killer. 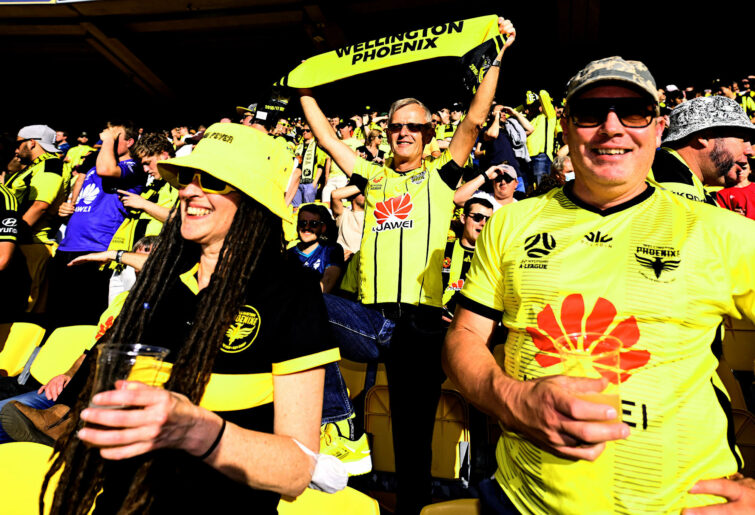 But given that it was Central Coast coach Montgomery who actively pursued Cummings – who has now scored seven goals in 16 A-League Men games after leaving Scottish side Dundee in contentious circumstances – perhaps it’s the Mariners tactician who deserves the credit.

Cummings has made a huge difference since arriving from the rough and tumble world of Scottish football and he was once again in a thick of things in the Kiwi capital, even if it was the equally impressive Moresche and substitute Matt Hatch who finished off the scoring.

Wellington have now conceded 17 goals in their past five games and boast the worst defensive record in the entire league – despite lying fifth in the standings.

Yet with another blockbuster to come against Western Sydney Wanderers at Eden Park in Auckland next Sunday, their fate is still very much in coach Ufuk Talay’s hands.

And the Phoenix deserve credit not just for the entertaining manner in which they play their football, but simply for having survived the past two COVID-riddled seasons.

General Manager David Dome runs a tight-run ship across the ditch, but he’d be the first to admit the Kiwi side have done it very tough over the past couple of seasons.

The sight of more than 18,000 fans filing through the gates at Sky Stadium is a timely reminder of everything the A-League Men can accomplish if it simply employs some common sense.

The Phoenix will draw another big crowd in Auckland next weekend and if the APL is serious about providing a level playing field, they should let the Phoenix host a marquee fixture in Round 1 next season as payback for basing the club out of Australia for the past two campaigns.

The league would be better off with an Auckland-based side in it anyway, and quite why we keep the Kiwis at arm’s length is another of football’s enduring mysteries.

The Socceroos will mark the centenary of their first-ever fixture on June 17 this year – a 3-1 defeat to New Zealand in Dunedin back in 1922 – with Football Australia chief executive James Johnson telling the recent Football Writers’ Festival the anniversary will be commemorated with a couple of friendlies against the All Whites in September.

And since New Zealand face Costa Rica in a one-off playoff in Doha in June for a place in the World Cup, the Kiwis might be the closest we come to cheering on a local side in Qatar.

It’s a bit of a shame the Mariners dished out such a comprehensive thrashing at the Cake Tin, even if the unpredictable nature of football is what makes the game so thrilling.

But it was fantastic to see the Phoenix back on home soil. After 300 days in exile, Wellington’s return was the feel-good story the A-League Men desperately needed.